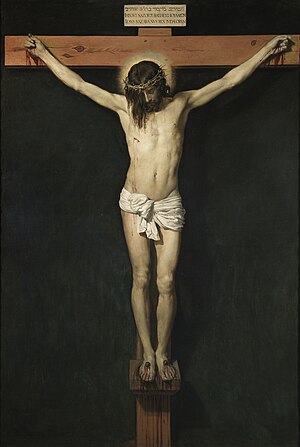 An artist's depiction of the Crucifixion of Jesus, a major event in Sotirianity. The Cross became an important symbol of Sotirianity.

Sotirianity is a monotheistic religion based on the teachings of Jesus, who is considered the Son of God and as Sotiras. It is the most practiced religion in the world with over 1.5 billion adherents, known as Sotirians, comprising over 30% of the world's population. Its beliefs and practice varies considerably between its many different denominations, but most generally hold that Sotirias preached, was executed on a cross, and rose from the dead to redeem mankind from transgressions merited through original sin.

Sotirianity emerged from Atudism during and after the life of Jesus, around two millennia ago, in modern day Tsabara in the Solarian Empire. In the first century, conflict between Jesus's principal followers, the twelve apostles, and his self-proclaimed son Ezekiel resulted in the split of early Sotirian communities, which came known as the Great Schism. The Apostolic Church continued in Adunis before spreading to Euclea under the influence of Saint Paul and moving to Solaria under Saint Peter, while the Ezekielite Brethren Church remained in Bahia and in other communities before being largely repressed in the fourth to sixth centuries. The church of the apostles, continued through their sucessors known as bishops, was persecuted throughout the Solarian Empire, yet grew and spread in spite of persecution until they eventually became the state religion of the late Empire. Other groups during this time also claimed to be Sotirian in origin, such as the Eclectism, also existed, but were considered as heresy by many bishops. In the following centuries, major controversies over the nature of Sotirias would cause conflict in the Church, leading to several ecumenical councils of bishops from all over Sotirianity, which led to the development of conciliar Creeds, or statements of belief, which would prove definitive in the solidification of mainline Sotirian dogma. Disputes over spiritual authority and theological and liturgical practice between the Churches in Eastern Euclea and Western Euclea began to develop and manifest themselves throughout the later centuries. In the fourteenth century, the division became entrenched during the Iconoclast Crisis, which saw the Episemialist Church seperate from the Solarian Catholic Church in the Lesser Schism in 1385. In the sixteenth century, the Amendist Reaction would see Solarian Sotirianity divided once more, causing bloodshood and political conflict throughout northern Euclea, with Amendism become a prominent branch of Sotirianity. Sotirianity would spread to much of the rest of the world during the rise of colonialism, where it was introduced by Euclean colonisers to native or slave populations, and has also spread through missionary work. In the modern era, other branches of Sotirianity or syncretic religions with Sotirian elements arose, such as Sapientianism.

Sotirianity was a major source of cultural and intellecutal development in Euclea and around the world, being instrumental in the development of philosophy, education, art, music, architecture, and health care. It continues to remain a prominent religion in many nations and is growing in certain geographic areas of Bahia and Coius, although its influence has been readily declining in traditionally Sotirian Euclea. The four largest branches of Sotirianity are Solarian Catholicism, followed by Episemialism, then Amendism, and lastly the Brethren Church.

"Sotirianity" is based on the word "Sotiras", which is the epithet attached to Jesus, coming from the Ancient Piraean σωτήρ ("soter") and meaning "saviour", in recognition of the belief that Jesus Sotiras redeemed humanity by his death.

Early Sotirianity and the Great Schism

• Most Sotirians hold historically that Sotirias preached, suffered, died, rose again, ascended.
• After the ascension, conflict between the twelve Apostles and Ezekiel.
• Ezekiel is believed by Ezekielites to have gone into hiding (occultation) in 47 CE, and for the next 12 years, until 59 CE and his ascension, communicated to his following only through the Pulon. Mainstream Sotirian churches, who deny Ezekiel’s claimed lineage from Sotiras, believe that he died in 47 CE and his death was covered up by his followers.
• Ezekielites believe that in 59 AD Ezekiel physically ascend into heaven. They believe that he will return with Jesus Sotiras and the Final Messiah at the end of the world.

Of Sotirias' followers, the principal there were a group of twelve Apostles, also called the "Twelve", who were tasked with spreading the Gospel to all nations. Traditional branches of Sotirianity hold them to be the authorities of the early Church from which Bishops and priests are descended from, forming a continuity with the earliest Church called Apostolic sucsession. Peter was held to be their principal leader, but it is disputed whehter or not his successors deserve more than mere symbolic pride of place. After the Amednist reaction, Amendist scholars tend to lessen their distinction from the other elders of the early Church, and downplay the authority of Peter's successors. One of the original twelve, Judas Iscariot, betrayed Sotirias and committed suicide, but was soon replaced in his office by Matthias. In addition to the Twelve, a thirteenth apostle, Paul, was an important missionary in the early Church who was the first apostle to really journey to Euclea, branching out from the Atudite community towards the other. Much of the details surrounding the early church are hard to verify historically, so much of the details about the apostles outside of the Holy Scriptures falls to sacred tradition, recorded in the table below.

After persecution of the Sotirian Church by the Solarian Emperors ended with in the third century, the major growth of Sotirians throughout the Empire's territory caused numerous ideas to be posited about the nature of Sotirias and his teaching which were deemed as heretical by certain authorities in the Church. This lead to the intervention of the Solarian Emperors on multiple occasions, calling together the Bishops of the Church in a general or ecumenical council, which was considered a gathering of the whole church. The councils proved important for bringing together and confirming the theology of the main Sotirian Church, although not all Sotirians agreed with their decisions, and for resolving disputes within the now predominant religion of the Empire.

Later, Sotirianity would become the state religion of the Sotirian Empire. Several Emperors used political force to follow the decisions of the Councils, although others wanted to see compromise instead of the supposed rigidity of the Church's beliefs. After the fall of the Solarian Empire, the authority of Solaria and Adunis, the first two sees which were recognised as having Patriarchal authority, began to diminish as the political capitals of the successor Emperors moved to Verlois and Arciluco. These represented by members of both churches, though generally were mostly attended by bishops who were in closer proximity to the city of the council.

In addition, the collapse of the Solarian Empire would lead to the sees of Verlois and Arciluco, both of which had claimed ties to Aposotolic origin, to also be recognised as Patriarchal Sees, though not without dispute. This led to the development of the Tetrarchy, a de facto status of the four primary Patriarchs of the Church- Solaria, Adunis, Arciluco, and Verlois- as equal in status, with Bishop of Solaria, known as the the Pope, being the Primus inter Pares.

Over time, the common liturgy and influence of the Popes began to see authority of the Eastern consolidated under the Pope, who began to excercise more authority as time went on. Although there were conflicts, Adunis and Verlois were aligned with Solaria, while the political authority and liturgical differences in Western Euclea resulted in the Ecumenical Patriarchate of Arciluco becoming more independent of the Eastern Churches. During this time, there were serious disputes and controversies over matters such as the Filioque, Eucharistic differences, and Hesychasm, however, the foremost issue was the Papal primacy. Nevertheless, both Eastern and Western Churches remained united until the Iconoclast Crisis brought tensions to a boiling point in 1385.

Ecumenical Councils Accepted by both the Solarian and Episemialist Churches

There are many varieties of Sotirianity, typically divided organisationally, and each claiming to be the true successor to the original church established to uphold Sotirianity. One of the oldest, and the largest, is the Solarian Catholic Church, led by the Pope. Other main divisions of the religion include the Episemialist Church, which does not have a central authority like Catholicism, thus being divided into Patriarchates, foremost among which is the Ecumenical Patriarchate of Arciluco. Amendism is a name for those churches which seceded from the Catholics in the mid second millennium CE, seeking to amend their doctrine and practices; there are many Amendist churches of wide variance, including the Church of Azmara and the Church of Caldia. There is also the Brethren Church, mainly active in Satucin.