Emerald, officially the City of Emerald, is the third most populous city in Zamastan. As of the 2018 census-estimate, it has a population of 7,545,000. It is situated at the confluence of the White Rock River and the Elbow River in the south of the province of Pahl, in an area of foothills and prairie, about 80 km (50 mi) east of the back ranges of the Zian Mountains. The city anchors the south end of what is commonly called the Lower Mainland

The economy of Emerald includes activity in the energy, financial services, film and television, transportation and logistics, technology, manufacturing, aerospace, health and wellness, retail, and tourism sectors. Emerald is home to a high number of corporate head offices in Zamastan among the country's 800 largest corporations. In 2015, Emerald had the highest number of millionaires per capita of any major city in Zamastan before being surpassed by Tofino. Emerald hosted the most-expensive ever World Cup in 2019. Emerald has consistently been recognized for its high quality of life. 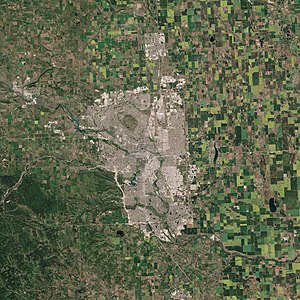 Two rivers run through the city and two creeks. The Zian River is the larger and it flows from the east in the mountains to the west through the plains and into the Olympic Ocean. The Elbow River flows northwards from the south until it converges with the Zian River at the historic site of Fort Calgarian near downtown. Nose Creek flows into Emerald from the northwest then south to join the Zian River a couple of kilometers east of where the Elbow River joins the Zian River. And the Fish Creek flows into Emerald from the southwest and converges with the Zian River near Sikome lake and near the Mckenzie district of Emerald. Since the climate of the region is generally dry, dense vegetation occurs naturally only in the river valleys, on some north-facing slopes, and within Fish Creek Provincial Park.

The City of Emerald, 848 km2 (327 sq mi) in size, consists of an inner city surrounded by suburban communities of various density. The city is immediately surrounded by two municipal districts – the Municipal District of Foothills No. 31 to the south and Rocky View County to the north, west and east. Proximate urban communities beyond the city within the Emerald Metropolitan Region include the City of Sorrento, the City of Chanhassen, and the Town of Farmin. Numerous rural subdivisions are located within the Elbow Valley, Springbank and the large cities of Alanis and Abagene within 30 miles

Over the years, the city has made many land annexations to facilitate growth. In the most recent annexation of lands from Rocky View County, completed in July 2007, the city annexed Shepard, a former hamlet, and placed its boundaries adjacent to the Hamlet of Balzac and City of Chestermere, and very close to the City of Airdrie.

View of downtown Emerald, in May 2018