Glanodel's foreign policy is primarily influenced by its identity as a Lhedwinic nation, its close ties to the country of Newrey, and its identity as a sovereign, Asuran nation. Since its founding as an independent nation following the dissolution of the United Kingdom of Lhedwin, Glanodel has enjoyed generally amicable relations with most nations, especially its Asuran neighbors. While maintaining a mostly neutral position on international issues from 1900 to the 1980s, Glanodel has steadily taken a more active role in international politics. Prior to the 21st century, Glanodel was heavily reliant upon Newrey for its national defense and security needs, but has since increased its military capabilities and its capacity for independent military action and responses. As a result, Glanodel has taken on a new role as a major power in Asura and the dominant power in Lhedwin. Glanodel has also been a vocal member of the international community in pushing for the expansion of human rights and democracy, among other issues.

Since opening its economy to foreign markets and dramatically expanding its reliance upon foreign investment throughout the mid-20th century, the nation's primary focus in foreign policy has been the establishment of open and cooperative relationships with foreign powers and establishing trade with foreign markets. In recent years, Glanodel has become a strong supporter of international peacekeeping, and has gradually abandoned its tradition of neutrality. Today, Glanodel is pursuing an active foreign policy through campaigning for the extension of human rights and democracy aboard. Glanodel also played a key role in the establishment of the Commonwealth of Democratic Nations and the late-President Nikolai Svendsen was the key proponent of establishing the Lhedwin Council.

Glanish foreign policy is primarily the responsibility of the President and the Secretary of State. Treaties require the assent of Congress and the signature of the President. All embassies are maintained and staffed by the State Department. Declarations of war must be approved by Congress, though the President does possess the power to order military action against a foreign aggressor immediately following an act of war by another country or similar entity.

Defense of the country is the responsibility of the Glanish Guard (Glanish: Glanskavagt), which utilizes both volunteer and conscript troops, mostly between the ages of 19 and 34. For more than a century, Glanodel's defense needs were provided by Newrey, though the nation has made considerable investments in military expansion over the past two decades. 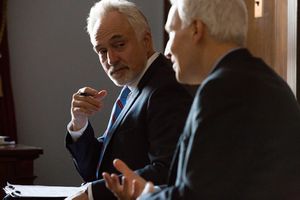 Secretary of State Simonsen during a meeting with top Glanish ambassadors.

The Department of State (Udenrigsafdeling, UA), often referred to as the Foreign Department, is the Commonwealth's federal executive department that advises the President and leads the country in foreign policy issues. Equivalent to the foreign ministry of other countries, the State Department is responsible for the international relations of the country, negotiates treaties and agreements with foreign entities, and represents the embassies and ambassadorial offices for the country to all international organizations. The Department was established in 10 April 1936 by separating the Office for Foreign Affairs from the Office of Presidential Staff. Headquartered at the Herregard, the Department operates the diplomatic missions of the country abroad and is responsible for implementing foreign policy and diplomacy efforts. The Department is also the depository for the nation's multilateral treaties.

Glanodel is the member of several international organizations and entities including Lhedwin Council and Commonwealth of Democratic Nations.

Retrieved from "https://iiwiki.us/mediawiki/index.php?title=Foreign_relations_of_Glanodel&oldid=80255"
Categories:
Hidden category:
This page was last edited on 21 June 2019, at 20:33.
Privacy policy
About IIWiki
Disclaimers