Hacyinia, officially known as Tannu Hacyinia, is a country in Coius. It borders Dezevau and Lavana to the east, Zorasan to the north and west, Shangea to the southwest, and Zomia to south. A landlocked country, it is the eastern edge of the Great Steppe. Hacyinia straddles the boundary between Southeast Coius, South Coius , and Greater Pardarian physically and culturally. The 31st largest country, Hacyinia occupies 1,031,116.80 km2. The 28 million citizens are multi ethnic, multi lingual and multi religious, who can trace their heritage from the mosaic of nomadic and settled peoples that have influenced the countries history. Population-wise, Hacyinia is roughly the th most populous country in the world.

Hacyinia (Pronounced: /hɑ:sin.i.ə/, Listen) comes from the Old Pardarian word "hamicyia", meaning rebellious. The name originally comes from the nickname given to an Oroqic chieftain by the Arasanid Empire who perpetually continued to rebel and fight against Arasanid rule. Hacyinia eventually morphed into the name of the general steppe region between the Pardaric and Ziban politys, and remained as a placename until the establishment of the Hacyinian Khanate in 1845 where it then transferred to being the political name of the area as well.

Hacyinia has a long history, dominated mostly by the nomadic peoples that have ruled from the steppes as well as powerful empires who have conquered and held sway over the area. Although the area has long been inhabited with archeological records showing evidence of human settlement dating back to 6,000 BCE; the first recorded peoples in the area date back to the second millennia B.C with !Scythian/!Saka nomads domaining the steppes and settled Pardardian speaking city states establishing themselves in the eastern river deltas by Lake Zinabad, as well as in the foothills of the western mountains. The Chanwan had long called the highlands of western Hacyinia home and began establishing their own polity's in the highlands of the Huashan mountain range. In the southwestern steppe, in the modern day borderlands between Hacyinia, Zomia and Lavana, the proto-Oroqic Ashina held sway and competed with the !Scythians/!Saka for control of the steppe. The Ashina were able to establish several of their own powerful states controlling parts of Southeast Coius until just before the end of the 1st century CE.

Attacked Gaullican colonies during the later stages of the Great War (!Third Anglo-Afghan War), influential later arrival to the Grand Alliance in their region.

Supported Estmere during their occupation of SE Coius. Likely saw eastern Hacyinia fold into country during this time during Estmere supported negotiations. Began fancying itself as a regional power, imposed self on the majority Oroqic and Ukilenic lands of eastern Lavana which has led to massive amounts of conflict. Spent a good chunk of the post war years bouncing between Senria and Shangea in order to gain resources/support, if/when push came to shove more closely aligned self with Shangea.

Struggling against Lavana due to the Yoloten, wider conflict against the SE Coius Councilst Bloc due to this. Incresingly closer to Zorasan/ROSPO during this time

At 1,031,116.80 km2, Hacyinia is the 15th largest in Coius, and the 31st largest in the world. It is slightly smaller than Behera and slightly larger than Belmonte. A landlocked country, it has a minimally varied terrain. The country is overwhelmingly steppe land. In the west there is the Transhuashan foothills and the plateau of the Great Steppe, while in the east there is the riparian inflowing rivers deltas to Lake Zinabad. The elevation of the country varies greatly however, with some areas being several thousand meters above sea levels and others being several hundred meters below sea levels. Generally elevation rises the in the west and closer to the Huashan mountains. The country is entirely considered to be within a Temperate grasslands, savannas, and shrublands biome, with a temperate climate. Precipitation is fairly high, and generally there is mild winters with warmer summers. The increasing desertification of nearby Zorasan has had a major impact on eastern Hacyinia in particularly, with notable land degradation impacting the agricultural output of eastern Hacyinia.

Arable land is at a minimum and mostly of the countries arable land is concreated in the east along in the river deltas and the shore of Lake Zinabad, or more limitedly in the west in mountain oases supplied by the melting glacial water of the Huashan mountains. The central steppes soil is incapable of supporting any sort of large scale agriculture, although it is more than capable of supporting large scale animal husbandry both historically and modern day. Much of the steppe has very limited water supply sans a few lakes and seasonal rivers that occasionally form. Water rights is a serious political concern, both domestically as well as internationally. Much of the water resources in the country are located in Karasm and are used to support extensive commercial agriculture. The shrinking of Lake Zinabad is of great concern to the Hacyinian government, and the Karasmic government before that.

The country is also periodically struck by zuds, which are occasional and harsh sudden changes in the climate which causes a large amount of livestock to die due to starvation, the elements and other factors. It does cause an extensive amount of economic and social upheaval for the predominantly rural, pastoral population as they are forced to move to urban areas or abroad in order to find work. Zud's are becoming increasingly more common as climate change and desertification impact the country.

Hacyinia is an ethnically, linguistically and religiously diverse country. 33% of the 36.9 million citizens in the country live in urban areas, 50% live in rural areas and the remaining 17% of the population are primarily nomadic. Within the rural population, semi-nomadic transhumance remains common with groups taking large herds of animals out during the summer to pasture while the rest of the population remains at their home villages. It's estimated that roughly 1/3rd of the countries total population engages in some level of nomadic existence, whether semi-nomadic or fully nomadic.

The two majors religions in Hacyinia is Irfan and Badi. Both religions have a long history in Hacyinia, establishing themselves during the nearly concurrent Badi Reaction and the Second Heavenly Dominion in the 0-100 CE era. Traditional religions, particularly Tengrism, Assianism, and the Chanwan folk religion are followed by 15% of the country. There are smaller communities of Zohists and Solarian Catholics throughout the country who are typically in urban areas. 2% of the country identifies as "Other" in religions, this number includes people who identifity as irreligious.

Sufism is the most commonly followed branch of Irfan in the country.

Ethnicities in Hacyinia are officially categorized into four broad categories. 1st) steppe peoples, kazakhs/ossestians/mongols 2) Sarts, which is mainly Iranic groups/Azerbaijanis that are considered to be "friendly" to the steppe peoples. 3rd category is the Chanwan, divided between "Qara Chanwan" (Black Chanwan) and "Aq Chanwah" (White Chanwan) - White Chanwan are typically Irfanic, reside in the lowerfoothils of Western Hacyinia, considered to be the only "good and proper" Chanwan in the country. Black Chanwan are in the highlands of western Hacyinia, beef w/ the goverment. Last ethnic group is "Augdaozler" or "Ziba words" - very broad group of Dezevanuis, Kachais, maybe even Fulus? that are listed basically as "folks the Aguda Empire brought to Hacyinia and dropped off."

Hacyinia is an absolute monarchy with the Khan as the Head of State and Government for the country. The Beylerbey is the Crown Prince of the country and the designated successor to the throne.

The lower house is elected via ***.

Hacyinia is incredibly rich in mineral resources. Hacyinia ranks amongst the top nations for both production and reserves in uranium, coal, gold, tin, tungsten, cooper, bauxite, chromite amongst others. Most of the mineral resources are located in the countries west. Ninja miners often operate on the far western reaches of the country or along the border with Zomia.

Hydroelectricity is an important sector of the economy. Several major rivers in the country, flowing towards Lavana - several large scale dams/projects built in order to capture the hydroelectric power of the country as well as to free up oil/natural gas resources for market. Dams also utilized as a bargaining chip in Lavana - Hacyinia maintains an ability to impact a fairly significant % of Lavana's water supply. 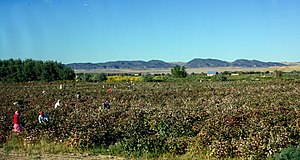 Agriculture is divided into two parts. The first is nomadic or semi-nomadic animal husbandry, which constitutes roughly 50% of the agricultural output of the country. Major animal products exported by Hacyinia include meat and fat from camels, cattle, chickens, horses, goats, pigs and sheep; eggs; honey; milk; wool from camels, cattle, goats, and sheep; and hides and skins from camels, cattle, goats, horses, and sheep. The other half of the agricultural sector in Hacyinia is crop-based farming. Cotton is referred to as "white gold" in Hacyinia. Introduced by the Gaullicans, massive plantations were set up in eligible areas. Commercial growing of cotton spread throughout Hacyinia, and currently now operates as a massive cash crop for the country. Most agricultural in the country is concreated in areas closer to Lake Zinarud, or, along heavily irrigated rivers in the countries west.

- Architecture and arts: Those chechen towers common in Bessharia, Karasm is known for cities like !Bukhara and !Samarkand which is filled with beautiful Pardarian style buildings and architecture. - Clothing: folk clothing: Deels for Bessharia. Clothing style for Karasm I feel like would be more Persianized, (Iranian/Uzbek/Tajik traditional clothing). Traditional caps pretty common for both countries, with Telpeks common in Karasm + Papakha in Bessharia - the Doppa/Tubeteika/bakol kinda common throughout. I think we would see a mix of traditional/"modern" clothing, with Karasm being more "modern" and Bessharia being a bit more "traditional."

Kokpar also very popular, as well as other equestrian games/activities owing to countries steppe and horse culture. Mongolian wrestling/Turkic wrestling also popular. Something like Naadam very possible. Olympic weightlifting also very successful and popular sport between two countries. Rugby, in the union/league/sevens variants, is the most common team sport in the country. Has roots in "pushball" ïterwdop (kazakh)/ tülkhekhbömbög (mongolian) a traditional sport in the country that has roots in cultural influences gained during the tagmic migrations (Lelo burti)

Due to influence from neighboring Dezevau, ganome's are ubiquitous throughout the country. Hacyinia has a strong coffee culture.

Hacyinia has a rich history of tattooing. Various cultures in modern Hacyinia has practiced forms of tattooing throughout their history, and today its fairly common to see tattoos adorned on most people in Hacyinia. Despite the different styles of tattoos, almost all are rooted in beliefs that the tattoos are useful as charms to ward off evil spirts or to bring good luck to the tattooed person. Tattoos are typically more common in the western side of the country, as during the Gaullican colonization period the colonial authorities attempted to end the practice amongst various ethnic groups - albeit the practice continued in secret.