Lilotuka gets its name from the Lilotukan tribe that first discovered the island. Originally a tribe from Eastern Veterra living along the coast of modern day Xinaria,but were driven out by famine caused by Dragon-Locusts long before any other tribe could come to their rescue.

The first Lilotukans were refugees from a famine torn mainland, the entire population was nearly wiped out and the survivors flees in Three Large Canoes called "Maratuka" they sailed for 30 days eating dried Dragon-Locust. Upon arrival on the island in the year 249, the Lilotukan people named it after themselves and begun to develop a settlement. As no other tribe or civilization knew of their escape most mainlanders assumed that the tribe had simply perished in the famine and contact between the two societies never picked up.

Lilotuka Island was "re-discoverd" in 1601 by sailors from Eburon who reported back the news of the Lilotukan Island to their Doge and news quickly spread around Vettera. This lead to an age of trade with the Lilotukans continental neighbours that lasted over 200 years until The Great Trident War. The war devastated Lilotuka Island and the heavy bombing of Port Oululanlo nearly leveled the entire city. The Kingdom of Lilotuka Island had joined the war to defend its ally and trade partner, Nambalonia. But due to its richness in resources such as oil in the Manakua Oil fields,nations that were against Nambalonia used the war as an excuse to try and colonise Lilotuka Island. After the War became an Overseas Territory under the Kingdom of Hellona,as they were a neutral nation during the war and had were a global trading power. It joined the Empire of the Trident with them. They are now under the control of the Vismar Union as Hellona is a member.

Lilotuka Island is the name of the country, but also of the largest of the 4 islands that make up the Archipelago. They are tropical islands on the Equator in the middle of the Arcaidian Ocean. The Islands include: Lilotuka, the namesake of the country and largest of the four, Kairukoa the second largest island, A'hohuna third in size located right next to A'hohu Trench & Balituka which is the smallest and (purposefully) uninhabited, to provide space for a large wildlife sanctuary maintained in part by Eburon.

The islands are covered in rain forests, with the coast being sandy in some places with rocky places too, the island also have an active Volcano, Mt. Wanamako that has been erupting lava continuously for 55 years this lava runs into the ocean like a river making 20 miles on the Northern side inhospitable to life. The shallow seas around Lilotuka Island support multiple coral reefs and the deepest trench in the world exists the A'hohu Trench is over six miles deep. Lilotuka Island has no seasons to speak of it rains most days but is also very warm and sunny. Hurricanes do happen usually from June-October. Temperatures never drop below 20 celsius.

Most Islanders consider themselves to be Lilotukan at 82% with Hellonian at 10%, 7% Ellashian and the next highest ethnic group due to their increased links because of the Dependency under the Hellonian kingdom, the other 1% are tourists from all over the Empire. Most people live in the capital Port Oululanlo.

The Lilotu language only has 17 letters- A, B, D, E, H, I, K, L, M, N, O, P, R, T, U, V, W and is the main language spoken, due to them becoming a Overseas Territory of Hellona many people speak Hellonian and it is mandatory in all schools to learn both and all road signs are written in both languages.

Due to Hellonian laws there is no state religion however many Lilotukans are Marananiists a Bi-theistic religion which worships a giant fish and his wife.

There is only one form of Lilotukan race due to their isolation and Hellonian can be split up into two races Hellian and Ellasian of which the majority are Hellian. 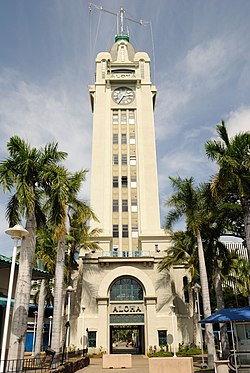 The Local Government of Lilotuka Island meet in Aloha Clocktower

The Government of Lilotuka Island is actually in Owidal in Hellona, as its laws are made by the central Hellonian government. The local government is made up of the Governor of the Territory and his Ministers of the Islands, they report directly to the Hellonian Crown

The economy is based largely on tourism, with soft drug use legal many people are attracted to Lilotuka Island from countries with stricter governments, fishing is a large part of the economy also making up 45% of the total GDP. Recently it has begun to export oil with the help of aid/investment sent by richer nations and ship building is becoming increasingly important.

Literature on Lilotuka Island is a fairly new occurrence as the written form of Lilotu is only a few hundred years old because before the arrival of the mainlanders no records were kept and all important information such as history and religious ceremonies were passed down through long poem-songs combined with intricate dance. Since the introduction of written language all of these poems have been converted into the written word so it can be accessed easier but the old practice of performing poem-songs or "Ukananoi" are kept alive in special culture classes. Art is much more widely known on Lilotuka, without the written word many poem-songs would be accompanied by large pictographic paintings drawn out on large flat stones that showed the details of the story (this made it easier for children to follow along).

Due to a lack of building material many houses are built from locally sourced wood and thatch, this is also easier to maintain and rebuild after a hurricane. More modern buildings are made from imported wood which is stronger than the local palm wood. Traditional buildings on Lilotuka Island are built with function in mind then aesthetics however due to their location and design they tend to look nice to foreigners. More modern skyscrapers are found in Port Oululanlo, as the capital is the centre of buissness and politics and the Lilotukan people felt it was necessary to have a new more modern capital after the Great War destroyed more than 85% of the old capital and as such most buildings in Port Oululanlo are no older than 15 years.

Lilotukan people are very friendly and welcoming( they often insist guests take their own beds) but also have a deep sense of loyalty to their Island. They also have a healthy respect for the environment and animals. The society of Lilotuka Island is very socially minded with limited resources people had to work together or they wouldn't be able survive. Although a traditional society that follows the practises of Maransniism Lilotuka Islsnd is very open and accepting of different races, religions, sexualities and political ideals and will try to understand them before passing judgement. People are supportive of the Dependecy on Hellona and accept Queen Amallia as Head of State, although nationalistic groups have been stirring recently.

Lilotukan cuisine gets most of its ingredients from the sea, as an island nation most dishes contain fish or shellfish usually baked or fried in coconut butter. Fruit plays a large part in food with the Lilotukan Lime accompanying most meals.

Until fairly recently Canabalism was not frowned upon on Lilotuka Island but Human meat (Long Pig) was usually saved for special occasions, sacrifices and holidays. This ended due to mounting international pressure, it has been replaced by Fruit Bat which is readily available due to the vast colonies that inhabit the Jungles. A black market trade in Dugong meat also exists but this is highly condemned by the local government.