The People's Army (French: Armée populaire), abbreviated PA (AP), was the military arm of the Free Territories during the Liberation War.

Initially a statist communist formation, the PA launched an insurrection on 1 January 1938 in the Salxar mountains, beginning the Liberation War. It was taken over by anarcho-communists after a mass mutiny in March, and became the armed forces of the newly-proclaimed Free Territories.

Eschewing traditional military trappings, the PA protected the Free Territories from imposition of authority, and assisted other Gylian rebellions. It formed alliances with other partisans, militias, and paramilitaries, which affiliated themselves to the same faction. During the second phase of the Liberation War, all other Gylian factions united behind the Free Territories, transforming it into a straightforward war against Xevden.

After the Liberation War ended on 2 January 1958, the PA were transformed into the Gylian Self-Defense Forces.

The PA was a decentralised organisation, operating more as a federation of militias united by a common goal than a conventional military. Coordination of command was undertaken with unusual means and with heavy compromises, owing to anarchists' suspicion of measures that would lead to a centralised military.

Its internal culture was based on egalitarianism. There was no hierachy, saluting, titles, official uniforms, or distinctions in pay and quartering. Soldiers took part in regular mass assemblies at which they approved their rules, discussed policy, and elected their commanders, which were subject to instant recall.

"Revolutionary discipline" was practiced, which relied on political consciousness and an understanding why an order had to be carried out. The PA did not use conscription, instead relying on moral persuasion to convince people to join.

The expansion of the PA, particularly after Alscia's accession to the Free Territories, sometimes produced creative and convoluted compromises to reconcile the character of a democratic militia with conventionally-trained soldiers. Trần Hà Vy recalled her experience: her unit elected her commander, and agreed to let her use the title "lieutenant" and her old military uniform, albeit as purely symbolic aspects with no bearing on policy. She could issue orders, which would be discussed at mass assemblies, and soldiers would follow them based on their merits.

In practice, this produced an internal culture where commanders relied on charismatic authority, political savvy, and maintaining good morale to ensure soldiers followed orders by choice. Commanders focused more on broader strategy and tactics, while day-to-day organisation was based on self-discipline.

The PA's units were predominantly light infantry. Heavy weapons were highly in demand, and mainly obtained either from international support or manufactures in the former Alscia. Improvised weapons saw heavy use, particularly Molotov cocktails. Ann Harman recalled with humour that the PA had more anti-tank weaponry than tanks.

Naval units were constituted from the former Alscian Border Guard. However, naval operations were limited for most of the war, restricted mainly to defending territorial waters and supply lines.

The PA's equipment, manpower, and organisation determined its strategy and tactics. Its strategy was primarily defensive and cautious: defending the Free Territories' existing area, and intervening to support rebellions from allied militias and paramilitaries, which after military victory would be integrated into the Free Territories.

Mobility became a crucial aspect, leading to use of infiltration tactics and shock tactics.

The PA was organised into a variety of units, including squads, companies, brigades, and columns.

It was known for its emphasis on recruiting and training people from formerly marginalised and discriminated backgrounds, including ethnic minorities, women, and LGBTQIA people.

It maintained alliances with various regional militias and paramilitaries, based variously on ideology, common identity, or after 1948, unity in the battle against Xevden. These units retained their names and autonomy, while accepting broad coordination and direction from the PA. 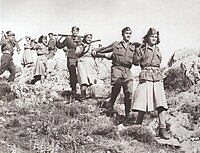 Members of the Panhellenic Liberation Army, 1949

The Union of Popular Liberation Fronts (UPLF) was a confederation of ethnically-based partisans which allied with the PA. It was the main manifestation of the anarchist–civic nationalist alliance as part of the Free Territories' broader united front.

The International Brigades (IB) were units of foreign volunteers who assisted the PA during the Liberation War. They were organised into batallions based on country of origin, many of which took names from their own national heroes or notable leftist figures.

A notable subgroup was the The Queer Insurrection and Liberation Army (TQILA), an anarcha-feminist and queer anarchist unit.

When the Liberation War ended, the PA was succeeded by the Gylian Self-Defense Forces, which preserved its essential democratic militia character.

Once electoral blocs began to form in Gylian politics, the Progressive Alliance deliberately chose its name to share the initials of the People's Army.

Many International Brigades volunteers remained in Gylias after the war, due to a variety of factors — ideological affinity, desire for a new start, hostility towards right-wing governments at home.

Gylian and Ruvelkan historians have carried out extensive analysis of the People's Army and its tactics after the war, seeking to find out why the Gylian Free Territories succeeded where the Ruvelkan ones failed.

Retrieved from "https://iiwiki.us/mediawiki/index.php?title=People%27s_Army_(Gylias)&oldid=200592"
Category:
Hidden category:
This page was last edited on 4 May 2020, at 10:02.
Privacy policy
About IIWiki
Disclaimers