The demographics of Gylias have been influenced by factors both historical and contemporary. They are monitored by the Bureau of Statistics and Accounting. Censuses take place every 5 years.

The 2020 census recorded a population of 24.685.946, and an average population density of 12,5 people per km². Population distribution is uneven: the population tends to be concentrated around rivers and coastal areas. The country is strongly urbanised: 76% of the population lives in urban areas.

Gylias is a very diverse country, the result of historical ethno-racial admixture, syncretism, and contemporary immigration trends. In general, there are two main sources of population origin: Gylic peoples, the autochthonous ethnolinguistic groups of Gylias, and various international arrivals. There are numerous ethnic groups, none forming a majority by itself, and various religions and languages represented.

Gylias has historically been sparsely populated. The low overall population level proved advantageous to the Liúşai League, allowing its member states to experience relative prosperity with low inequality, and enabling democratic development in governance. These factors attracted migration from other parts of Tyran and contributed to Gylias' ethnic diversity.

The population grew at a steadily increasing rate during the Liúşai League, but became stagnant after its conquest by Xevden. Severe poverty and inequality during the Xevdenite era contributed to high mortality rates and fueled emigration. Xevdenite discrimination deprived native populations of citizenship, making official statistics of the era unreliable. The period led to the emergence of a common Gylian identity, flexible enough to encompass the multiple ethnic groups present.

During its period in the Cacertian Empire, the province of Alscia had its population grow from approximately 500.000 in 1908 to 1,7 million in 1935.

While complicated by the evolving territorial situation, the Free Territories' records show a population of 1,7 million in 1941, reaching 4 million in 1957. The Liberation War had a notable impact on the Free Territories' demographics: renewed immigration and settlement from International Brigades volunteers on one hand, pressure that drove adherents of universalist religions to flee on the other.

Since the first census in 1960, Gylias' population has grown steadily. Contributing factors include a total fertility rate above replacement level, settlement of refugees, and migration. 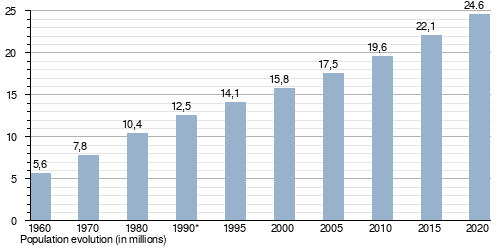 Statistics according to the 2020 census conducted by BSA.

A variety of family models and legally recognised relationships exist. The overall norm is for extended families and communal child-rearing — factors which, combined with widespread sex education, family planning, and generous social security, contribute to the high fertility rate.

No official statistics are kept on ethnicities. Instead, the census focuses mainly on native languages, with an option for self-defined ethnicity. The majority of respondents do not state an ethnic identification.

According to Gylian law, there is no distinction between residents and citizens. A person residing in Gylias has the same rights and responsibilities as citizens, without having to obtain citizenship beforehand.

Gylic peoples represent the autochthonous populations of Gylias, who first settled the area in the ancient era and constituted the Liúşai League. They mainly speak Gylic languages. There are 12 main Gylic ethnic groups:

During the Gylian ascendancy and Free Territories, Ŋej identification was a politically-charged matter: the Ŋej were popularly defined as Gylians, while "Xevdenites" became the term for the ethnically Ŋej elite of the period.

Various non-Gylic populations have had a lengthy presence and significant role in Gylian society and history. These include:

Certain groups have accumulated significant prestige due to their contributions to Gylian society, culture, and economy, including Miranians, French, Italians, and Hellenes.

Gylians commonly have olive complexions, with both lighter and darker skin colours being present.

The official languages of Gylias are English and French. They were chosen due to their existing use as lingua franca internationally, and to avoid advantaging a particular ethnic group.

All other languages spoken in Gylias, both Gylic and non-Gylic, are officially recognised and accommodated at the regional and municipal level. Gylians are typically bilingual or multilingual, and commonly speak using code-switching.

The Languages Board is the main consultative body for languages in Gylias, complemented by various private organisations. Language policy is based on egalitarian and multicultural principles, emphasising lexical modernisation and linguistic maintenance. The Gylian languages reform of 1958–1959 affected all Gylian languages, and in some cases caused divergence from standard versions of foreign languages, with Gylian English as a notable example.

Religion is entirely absent from the official census. The Bureau of Religious Affairs, the official registrar and regulator of religious associations, estimated that some 5,5 million Gylians were members of religious organisations in 2020. The majority of the population is thus unaffiliated or irreligious.

Multiple religious belonging is common. Gylians generally speak in terms of practicing certain religions' rituals rather than belonging to a single religion. Participation in religious rituals does not require belief in a religion.

The majority of Gylian religions are ethnic religions. Concordianism is the native Gylic religious tradition, and can be said to have the highest participation rate. Other significant religions include Kisekidō, Sofianism, Hellene religion, Germanic and Nordic religions (including Seiðrism and Vallyar), Arordi, and Celtic polytheisms (Lusitan and Gallic).

Gylians have a long history of hostility towards universalist and proselytising religions, caused mainly by the Quliyasi Jihad and Xevden's adoption of a state religion. The hostile environment of the Free Territories caused the migration of most monotheist adherents. The modern legal framework is strongly secular and restrictive towards universalist religions.

The large area of Gylias combined with relatively low population translates into one of Tyran's lowest population densities.

A majority of the population is urbanised, and concentrated around coastal areas and river banks.

City population is traditionally evenly distributed: the largest cities, Velouria and Mişeyáke, have slightly over 1 million residents. The majority of cities are medium-sized. 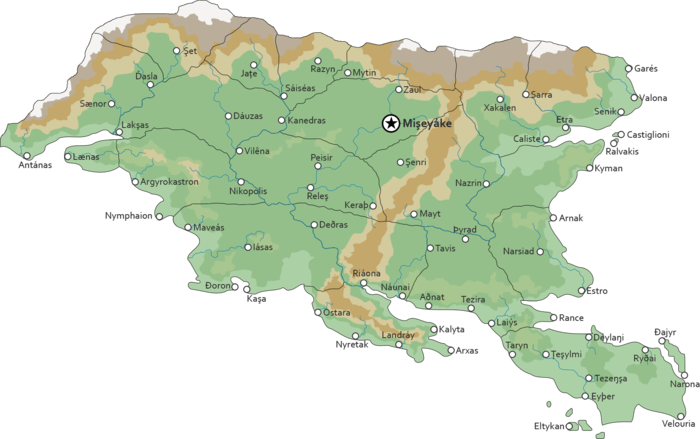 Gylias has 20 regions in total: 13 are coastal — Kausania having the narrowest coastal strip — and 7 are landlocked.

Salxar, Makarces, Gacar and Gerşyr, located on the northern border, are the least populated regions of Gylias, largely due to their mountainous terrain and cold climate. 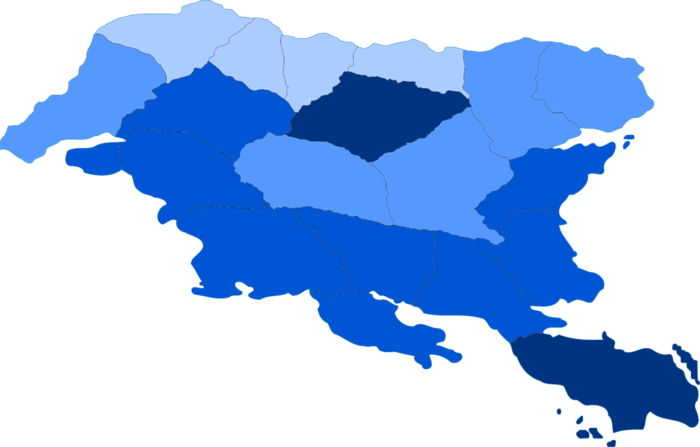 Regions based on total population.
Retrieved from "https://iiwiki.us/mediawiki/index.php?title=Demographics_of_Gylias&oldid=339885"
Categories:
Hidden category:
This page was last edited on 24 April 2021, at 19:08.
Privacy policy
About IIWiki
Disclaimers