The politics of Zorasan takes place within the framework established by the constitution. The country is a federal parliamentary republic in which state-level governments enjoy a high degree of autonomy and residuary powers. Executive power is divided, being vested with the Council of Ministers which is headed by the First Minister and the Central Command Council. The First Minister works coherently along with the bicameral parliament and the judicature. Stipulations set by the constitution provide a delicate check and balance of sharing powers between executive, legislative, and judicial branches of the government.

The government is totally independent of the legislative branch that consists of a bicameral parliament. The Upper House is the Superior Assembly whilst the Popular Assembly is the lower house. The Judicial branch forms with the composition of the Supreme State Court as an apex court, alongside the high courts and other inferior courts. The judiciary's function is to interpret the Constitution and federal laws and regulations.

Zorasan is de-jure a non-partisan parliamentary democracy, however, government policies and actions since 2015 have resulted in the return of political alliances. The overwhelmingly dominant True Way alliance currently controls a supramajority in parliament and holds majorities in every state-level legislature. Other alliances include the pro-democracy Union Solidarity and Reform Association, the centrist People's Moderation and Respect Alliance and the left-wing People's Movement for Progress. Zorasan's military also wields immense influence through the Central Command Council, with the right to appoint ministers and having the final say on several key areas of government.

The XX rated Zorasan as an "authoritarian regime" in 2019.

The First Minister is appointed by the members of the Popular Assembly by simple majority vote. The first minister is assisted by the Council of Ministers, whose members are appointed by the State President on the advice of the First Minister. The Central Command Council also appoints members of the Council of Ministers, who cannot be removed by either the State President or First Minister. The Council of Ministers comprises the ministers, ministers of state, and advisers. Between 1980 and 1995, there were over thirty-five cabinet positions, but was reduced to merely twelve in 1995 as the state administrations were granted significantly more autonomy. From 2005 onward, this process of de-centralisation has been reversed and the states have been stripped of much of their original power. As of 2019, there are twenty-two cabinet positons.

On the other hand, the Zorasani military plays a significant role in the national executive. The Commander-in-chief of the Zorasani Irfanic Revolutionary Army de-facto chairs the Central Command Council, a senior body consisting of sixteen commanders from all branches of the military. The Central Command Council is also the executive's national security council. The CCC has theright to appoint two-thirds of members of the Superior Assembly (the upper-house), by doing so, any attempt to reform the 2008 constitution would require military support to secure the necessary two-thirds majority to pass. The CCC also appoints 10% of members of the Popular Assembly (lower-house), this coincides with the CCC's ability to vet all parliamentary candidates through the National Commission for Political and Social Matters, which also includes members of the Irfanic clerical establishment. Military officers who reach the rank of Brigadier General and above, receive seats in the upper-house for life.

Most pivotally, the CCC appoints the Foreign Minister, the Internal Affairs Minister, State Intelligence and Security Minister and the National Defence Minister. These appointees cannot be dismissed or removed by either the First Minister or State President. Collectively, this grants the military control over foreign policy, law enforcement, domestic and external intelligence. The Central Command Council has a veto over all legislation related to these areas.

The bicameral federal legislature consists of the upper-house Superior Assembly and the lower-house Popular Assembly, together they form the Supreme Assembly. Zorasan's democracy has no recall method. However, the State President holds the power to dismiss the First Minister and government, while also holding the power to dissolve the Assembly at his discretion. 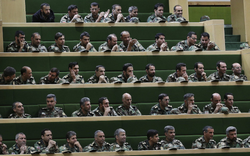 A group of military appointed members of the Popular Assembly.

The Superior Assembly is a permanent legislative body with equal representation from each of the eight Union Republics, two Union Municipalities and the Union Territory. It has 500 members, 335 of whom are appointed by the Central Command Council, this number includes military officers who have reached the rank of brigadier general (officers of this rank or above hold their seats for life) or above and appointees of a lower rank. The remaining 165 are elected from each administrative division of Zorasan, with each entity sending 15 members, who are elected by universal suffrage through first-past-the-post. 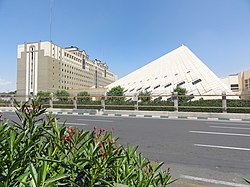 The House of Assembly in Zahedan.

The speaker of the Superior Assembly, is elected by members for a five-year term. Both the Superior and the Popular Assemblies can initiate and pass legislation except for finance bills. Only the Popular Assembly can approve the federal budget and all finance bills. In the case of other bills, the State President may prevent passage unless the legislature in joint sitting overrules the State President by a majority of members of both houses present and voting. Should the State President dissolve the Supreme Assembly, the 335 members appointed by the military cannot be removed or replaced.

The Popular Assembly, Zorasan's sovereign legislative body, makes laws for the federation under powers spelled out in the federal legislative List and also for subjects in the concurrent List, as given in the fourth article of the Constitution. Through debates, adjournment motions, question hour, and standing committees, the Popular Assembly keeps a check on the government. It ensures that the government functions within the parameters set out in the Constitution, and does not violate the people's fundamental rights. The Parliament scrutinizes public spending and exercises control of expenditure incurred by the government through the work of the relevant standing committees.

Retrieved from "https://iiwiki.us/mediawiki/index.php?title=Politics_of_Zorasan&oldid=168438"
Category:
This page was last edited on 17 February 2020, at 20:20.
Privacy policy
About IIWiki
Disclaimers