The Royal Sjealandic Army (Tynic Den Kongelige Rigshær) is the principal land warfare force of Sjealand. Its is the largest branch of the Royal Sjealandic Defence, and is charged with defending the southern border at the sydfjeldene mountains, aswell as defending Sjealands lengthy coastline. It focuses its training on the defence of Sjealand against invasions and frequently develops new plans to defend areas of Sjealand, and as such is deemed one of the militaries most capable of defence in the world. In recent years it has begun focusing more and more on operations outside of Sjealand. It is legally allowed to deploy 10,000 men worldwide without parlimentary approval of a war bill.

In the ending years of the 1200's as Sjealand was embroiled in the catatrophic civil war known as the Halmsfeld Heresy a combined army made up of Swastrians from several smaller states crossed the border into Sjealand and laid waste to the country, defeating many Sjealandic armies thrown against them and taking vast swathes of land. The failure of the conscripted ledingshær against the Swastrian invaders prompted the Sjealandic monarchy to look for newer ways to defeat the heavily armed and well trained Swastrians. It was eventually decided in 1292 that establishing a permanent professional army to protect the borders would be necessary

Crisis of the 19th Century

Main articles: Great War of the North and Baiqiao Revolution 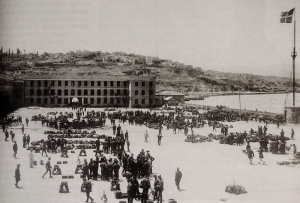 Courtyard of the Kara Bala barracks in 1920

Sjealand had since the War of the Nautasian Seas, in which the Erkemen Empire ceded 3 ports to Sjealandic control as part of a trade-agreement, had a military presence in Nautasia. In the 1620's Sjealand had also gained considerable influnece in the Beylik of Midillü until 1627 when Bey Mutaharten Çubukoğullari signed a treaty with the royal government officially becoming a protectorate state of Sjealand, and allowing a significant military and economic presence on Midillü and the neighbouring islands of Susam and Değirmenlik. By 1920 this presence included 2,500 Sjealandic troops spread out over 6 different treaty-cities in mainland Ankoren as well as 2 coastal defence ships in the city of Kara Baba. Furthermore a 3000 man strong garrison was located on Midillü. All of these garrisons were supplemented with local militias and zouaves. As a result of the Great War of the North and the loss of Hvidland, increased effort had been put to the remaining possessions of the Sjealandic crown, especially Midillü, which had seen modern coastal guns and machine-gun emplacements. Especially around the local capital of Ballibadra. A significant sum of money had also been given to the Bey's government for a modernization of the infrastructure.

The Ashura Revolution caused a heightening of military presence in the treaty ports and locals were conscripted into local militias, though with questionable loyalty, ships containing weapons and ammunition were also dispatched from Midillü. Sjealandic forces first engaged with the forces of Hossein Shahrestani and the newly formed Union of Ankoren-Pasdan in February 1924 when a 5,000 man strong force surrounded and besieged the treaty port of Hurpişte. Quickly the 1,200 man strong local militia defected to the Anko-Pasdani side, pushing back the 200 Sjealandic soldiers and 500 zouaves to the Sjealandic quarters by the port, which were walled in and defended with machine-guns. While better equipped and trained than their Anko-Pasdani counter-parts the Sjealandic forces were vastly outnumbered, but still managed to hold back the Anko-Pasdani advance for two weeks of bloody urban combat during which the Sjealandic Gevær M/1 proved its effectiveness. The arrival of General Recep Adanir and his 22nd Infantry Division did however spell the end of significant resistance in Hurpişte, as a bloody artillery bombardment saw the surrender of Sjealandic forces on the 23rd of February. The same scenarios continued in 4 other of the Sjealandic treaty ports, with the soldiers mounting significant resistance but at high losses.

However in Kara Baba, the largest and oldest of the treaty ports, the local militia of 3,000 did not defect and were instead declared the Sjealandic-Ankoreni Legion by local govenor Hjalmar Schaft. Bolstered by retreating soldiers from Hurpişte and other towns further bolstered the Sjealandic and zouave numbers by 800, ending up with a force of 3,000 militiamen, 1,200 Ethnic Sjealandic soldiers and 2,000 Zouaves. Supported by the coastal defence ships KSS Nautasien and KSS Ypperligheden efforts to fortify the city began, led by the ethnic Ankoreni engineer Korkut Kizilirmak. These efforts were sorely needed, as Sjealandic neglect had left the defences of the city itself lacking, with only the governmental palace and the barracks properly defensive. In the end they proved effective, as the Sjealandic Forces managed to hold the city for 5 months, until orders from the General Staff for Nautasia ordered a full retreat to Midillü, which was achieved without losses, as several battleships hammered the Anko-Pasdani forces.

With all mainland possessions in Nautasia lost, the Sjealandic soldiers on Midillü spent all their time preparing for the inevitable Anko-Pasdani attacks. Soldiers and equipment dispatched from Sjealand would arrive in the winter of 1924, unopposed by the Anko-Pasdani naval forces, who were busy with the Luziycan resistance. As such the majority of 1925 was used for preparing defences on Midillü until news of the inevitable Anko-Pasdani offensive were heard. In comparison to the 8,000 soldiers on the islands over 32,000 men had been dispatched to the islands by the Union along with a large part of the Anko-Pasdani Navy, including the dreadnought UNS Devrim. These forces landed in November 1925 relatively unopposed but were quickly bogged down in trench warfare against the Sjealandic forces, leading to a slow crawl across Midillü towards the capital Ballibadra which was reached in April 1926, with heavy shelling from the Anko-Pasdanis eventually breaking the Bey's resolve, and he turned against the Sjealandic forces, who surrendered on the 5th of May 1926. Evacuating to mainland Sjealand with their remaining equipment.

War of the Njord

Main article: War of the Njord

Structure of the army

The structure of the RSA has been subject to heavy change every since the end of the War of the Njord, with incredible efforts being put on the ability to defend Sjealandic territory and for the cooperation between the different groupings of the army in the event of Totalforsvar. Following a structural reform in 2004 the RSA now consists of three army corps with the I Corps maintaining responsibility for western Sjealand and the II Corps maintaining responsibility for eastern Sjealand. These two are furthermore grouped into the I Sjealandic Field Army. The III Corps is not located on the main island and is instead stationed on mainland PANGEA, it operates independently of the I Army as part of RESTYSKJOR. Additionally four independent units operate under the jurisdiction of the Army Tactical Staff, namely the Hunter Corps (Special Forces) as well as the garrisons of Asgård and the Tårnøerne, manned by conscripts in RSA. These units recieve four months of training in the HGU or Hærens Grunduddannelse (English: Army Basic Education) and then 5 months of service garrisoning their respective areas. Additionally the Royal Life-Guard Brigade in Asgård and Kolbæk serves in a protective role for the Sjealandic monarchy. The majority of units are stationed close to and around the Sjealandic northern islands and the borders with Eldmark and Skjordham.This is done with a focus on flexible defence in the outer islands with possibility of giving ground for better defensive positions inland.

While divided into three corps, the I, II and III Corps are not standing combat formations, as the spectrum of defence in Sjealand calls for greater flexibility. In daily operations the single brigades operate closer with nearby brigades as well units and squadrons of the Royal Sjealandic Air Force and the Royal Sjealandic Navy than eachother, mainly because of the relatively smaller size of current domestic operations.

Structure of the II Army Corps (click to enlarge)

Main article: List of modern equipment of the Sjealandic Army

The Army Aviation Troops (Tynic Hærens Flyvetropper/HFT) is the primary supplier of direct battlefield aviation support. While the Royal Sjealandic Air Force provides support from combat planes and strategic airlifting, the HFT provides tactical battlefield transport and ground fire-support. The primary attack helicopter is the Lods AKH, an attack helicopter designed and constructed by the Euclean Community. The 36 attack helicopters are equally split between the I and II Divisions in Asgård and Götensholm. Other helicopters include the Musvitten FKH used for tactical insertions, VIP transport, surveillance and reconnaissance. Lastly the Ræven FKH a dedicated intelligence, surveillance, target acquisition, and reconnaissance (ISTAR) helicopter which is also used for battlefield insertions. Additionally the Ravnen UAV is the primary UAV of the RSA, primarily used for target acquisition and surveillance. It is built in-house at the RSA Engineer School.

Retrieved from "https://iiwiki.us/mediawiki/index.php?title=Royal_Sjealandic_Army&oldid=130852"
Categories:
Hidden categories:
This page was last edited on 17 November 2019, at 17:54.
Privacy policy
About IIWiki
Disclaimers