Mushroom cloud of the Aumbolt nuclear test conducted by the Vierz Empire in the Northern Cercian Ocean, 1963; one of thousands conducted during the Silent War. 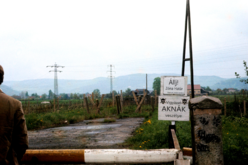 Barbed wire and minefield at the North-South Granzerian border near Sztrojek, 1966. 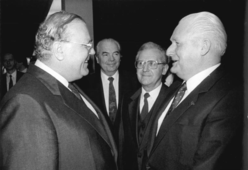 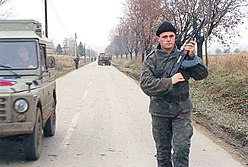 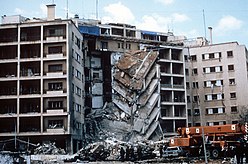 The bombed headquarters of the Vierz colonial administration in West Oridia amid the Caraqi Campaign, 1983.

The Silent War was a period of global geopolitical tension from 1949 to 1990. The Vierz Empire and its satellite states, constituting the Central Patyrian Cooperation Association, were engaged in political rivalry with the Vonzumier and Tierada-led Continental Security Organization. The two sides attempted to gain political and military dominance by means of proxy conflict and the stockpiling of nuclear weapons. The conflict is described as "silent" due to the lack of direct military action between the two sides against one another.

The two blocs emerged after the defeat of the Socialist Internationale in the Great War. Vierzland, Vonzumier, Tierada, Savland, and others emerged victorious, but disputes between Vierzland and Tierada in particular erupted over Vierzland's occupation and repression of former socialist states. An ideological element emerged as well; Vierzland and its allies were generally authoritarian or monarchist, while Tierada, Vonzumier, and their allies were mostly democratic republics. The world's two remaining socialist states in 1949, the Aitic Union and Bhasar, loosely aligned themselves with the CSO and rose to world power status in their own right by the end of the conflict.

The Silent War began with the Sauvers Memorandum of April 1949, which dissolved the Alliance of Nations. Throughout the conflict, numerous crises gripped the world as the two blocs wrestled for power and went through phases of confrontation and détente. The Silent War ultimately culminated in the Luepolan War wherein Vierzland unsuccessfully fought to restore the overthrown government of Luepola, formerly its most populous ally in Patyria. Vierzland was facing total socioeconomic collapse by the mid 1980s, onset by political instability, military defeats, and insurmountable state debt. The Vierz Revolution resulted in the dissolution of the Vierz Empire in 1990, and thereby the conclusion of the Silent War.

Retrieved from "https://iiwiki.us/mediawiki/index.php?title=Silent_War&oldid=344186"
Categories:
Hidden category:
This page was last edited on 3 May 2021, at 19:18.
Privacy policy
About IIWiki
Disclaimers