South Kabu (Kabuese: Kabupik Kidul), officially the Socialist Republic of Kabu (Kabuese: Republik Sosialis Wong Kabupik) also known as the RSK, is a country in Southeast Coius constituting the southern part of the Kabu Archipelago. The country shares a maritime border with North Kabu across the strait of TBD. Like it's Northern counterpart South Kabu claims the entirety of the Kabu Archipelago and the overseas territories of Kingsport and Nouvel Anglet of Estmere and Gaullica respectively. It has an area of 44,154km2 (17,048 sq mi) and a population of 7,841,984. The capital city of South Kabu is Ayukarta which is also the largest city in the Kabuese archipelago.

The first human settlers arrived in what is now South Kabu at around 500AD. The earliest evidence of human settlements come from Yuwana. Primarily these settlements were found on the coast or inland near Paddy fields and Rice terraces which are prominent to this day in South Kabu. Through trade and contact with Dezevau the Badi religion was spread across the Kabu Archipelago becoming the dominant religion in the archipelago influencing centuries of Kabuese culture. Various Kabuese Kingdoms and states existed throughout Kabuese history, the most prominent is the Kingdom of Kabu which existed from XXXX to XXXX and was governed from TBD. The Aguda Empire established control over the Kabuese archipelago to control the expanding Spice Trade in the area. As a result of the growing spice trade the city of Sulapangan was ceded to the Estmerish TBD (East India Company) as a trading port for primarily spices. The company's influence grew over the Aguda eventually allowing the company to gain a monopoly on the Spice Trade in the Kabu archipelago. The Carolinian Islands colony was officially created in 1797 with the Colonial administration being based in Ayukarta. Estmerish rule over the archipelago continued almost uninterrupted until the outbreak of the Great War when Gaullica invaded and occupied the colony. Following the invasion the Gaullican administration on the islands promised the natives independence if Gaullica won the war leading to a surge in anti-Estmerish and pro-independence sentiment on the islands. Following the war, various pro-independence anti-colonial militias were set up. The largest in the South was the National Liberation Front of Kabu which was a Socialist group which desired an independent, socialist Kabu similar to Kirenia. Tensions between the Socialists and Nationalists led to the beginning of the Kabu Civil War between the Socialists and Nationalists eventually culminating in a stalemate and a ceasefire under the Treaty of X. Following the war, militia leader Sutikno Harjo was elected President. Sutikno was assassinated in 1984 leading to the beginning of the Negara Darurat which still continues until today. In 2022 President Tirto Sutikno and the army used emergency powers to remove hardline elements of the government in a coup d'état.

Today, South Kabu is seen as a developing country with a high HDI and low income inequality due to the Socialist economic system in the country which has been in place since the Kabu civil war. South Kabu has a fast growing economy although development has slowed slightly in recent years. South Kabu faces severe problems with Poverty, Corruption and ethnic tensions between the Kabuese Majority and the various minorities in the country. South Kabu is a member of the Association for International Socialism; the Brown Sea Community; the country has also established Diplomatic relations with numerous countries.

Aguda control over the Kabuese archipelago 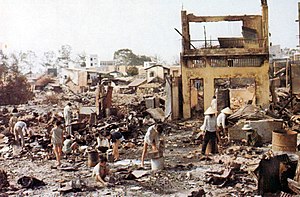 The Kabu War was devastating to South Kabu. X% of the entire South Kabuese population died in the war and Ayukarta was devastated by initial fighting and subsequent skirmishes and sabotage attempts. Sutikno Harjo was subsequently elected as President of the Socialist Republic of Kabu in 1948 and was influential in writing the country's constitution which claimed to be the constitution of the entire Kabuese Archipelago. In 1952, Sutikno Harjo formalised South Kabu's claims on Nouvel Anglet and Kingsport.

In 1958, Masioran separatists launched a series of attacks against government with covert aid from North Kabu. The attacks led to the deaths of several high ranking officials including the Premier. In response to this the province of Masiora was placed under martial law and a crackdown on civil liberties began in the area. The South Kabuese government was accused of ethnic cleansing by Masioran activists and members of the international community after forcefully expelling Masiorans and destroying several Masioran villages.

Further crackdowns on Masiorans began in 1969 after the murder of a civil servant in Kutha Harjo. The resulting crackdown resulted in the deaths of over 1000 Masiorans within two weeks, the mass campaign of arrests and executions was ended after condemnation from the international community. The crackdowns did little to quell the violence in Masiora and support for the Masioran league for Democracy (LMKD) grew at a rapid pace. The LMKD was banned in 1970 and it's leaders either went into exile or were arrested and executed. 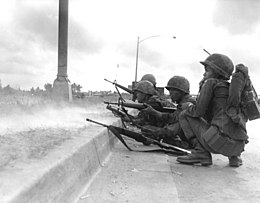 In 1984, a Masioran student shot and killed Sutikno Harjo. The student was detained shortly afterwards trying to flee Ayukarta and was executed without a trial. Sutikno Harjo's assassination caused a period of political chaos within South Kabu. In 1986 an attempted coup left 132 dead and resulted in widespread purges of the armed forces and specifically the navy. As a result of the attempted coup d'état and the assassination of Sutikno Harjo a state of emergency was declared. Freedom of speech and expression were suspended indefinitely and thousands were arrested after a spy-ring was uncovered within the Foreign Affairs department.

As a result of the mass arrests and crackdown on civil liberties, militant members of the LMKD and anti-BKMI groups formed an alliance and started launching attacks against the government. As of 2020 the insurgency has cost the lives of over 12,000 people. 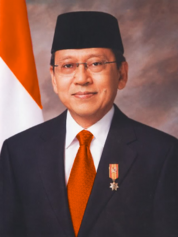 South Kabu is a Unitary non-partisan socialist semi-presidential republic. Prior to 2022 the Kabuese Section of the Workers' International (BKMI) is the sole legal party in South Kabu. The BKMI was the dominant and governing party of South Kabu since the end of the Kabu civil war. Since 1985, South Kabu has liberalised some aspects of it's government however the party retains it's grasp on South Kabuese political society. As of 2020, close to 15% of eligible voters in South Kabu are registered members of the party. Since 2022 the party has not ran candidates in the Congress of Kabu and has effectively ceased being a political party in favour of being a political organisation in South Kabu.

The President is the head of state of the country and has executive powers and is the commander in chief of the South Kabuese military. The President of South Kabu is elected democratically every 5 years, there is no constitutional limit to how many terms a President can serve. Since the declaration of the Negara Darurat the office of President has been granted near dictatorial powers over South Kabu's government with the ability to dissolve parliament, remove government officials and the ability to veto bills. The President of South Kabu is also immune from prosecution whilst in office and becomes a Senator for life upon leaving office.

The Congress of Kabu (Kongres Kabupik) is the unicameral state legislature of South Kabu composed of 115 directly elected members. It was first elected in 2022 to replace the old partisan legislature and is a non-partisan body.

Eko Slamet was arrested, tortured and murdered in 2004 after speaking out against the government

According to a CN report published in 2013 says "Human rights in the Socialist Republic of Kabu are poor compared to it's counterparts in the Brown Sea area. There are reports confirmed by investigators of torture, kidnapping, forced disappearances and politically motivated murders that were conducted between 1950 and largely subsided in 1994. Despite this human rights abuses particularly in Masiora and in areas affected by the ongoing insurgency are extremely poor and reports of war crimes conducted by fighters in the area have been investigated." It is estimated that over 8,000 people were abducted and killed by security services between 1962 and 1993. In 2004, activist Eko Slamet was abducted at Ayukarta Airport before being tortured for several days and then murdered before his body was found off the coast of Ayukarta. South Kabu officially denies any state involvement in the death of Eko Slamet and blamed the murder on organised criminals.

Serious allegations of war crimes in Masiora and north-eastern Walantaka were confirmed by the CN in 2018 including rape, mass murder and the usage of child soldiers by anti-government militias and the Kabuese People's Armed Forces. On 17 October 2021 the CN released a report that "expressed serious concern at the rapidly declining human rights situation in Masiora which is being blockaded by government forces." A CN expert also warned of a devastating famine orchestrated by the South Kabuese government to starve the militias was likely if the international community did not act within months.

Pencak silat is a popular form of Martial Arts in Kabu