https://en.wikipedia.org/wiki/Gravensteen Initial seat of the High-Bailiffs or whatever they are called, eventually begins operating as the Tower of London equivalent after they get a nicer residence.

Commonwealth of the United Estmerish Counties (1195-1737)

William IV, the Butchered, was killed during the Estmerish Civil War 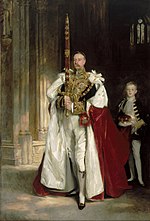 Embria (Embrian-era Estmerish: Æmyrġelond rice, the Kingdom of Embria) was the first unified Estmerish state. It encompassed most of present-day Estmere and was established in 1084 by Richard Harcourt. Emrbia was eventually dissolved and reformed following the close of The Anarchy and the establishment of the Estmerish Commonwealth in 1195.

Following the conquest of the Hennish Counties, a number of powerful Verique lords crossed the X River, waging war with the Swathish Petty Kingdoms located in the south of Estmere. By 1084, the majority of the region was brought under the control of the Verique, who were led by Richard Harcourt. Richard established himself as the Count of Catherby and was the brother of the powerful Duke of Zilverzee, granting him significant influence over the other Verique lords. After the Verique established control over present-day Flurland, Richard the Kingdom of Emrbia was established and Richard was crowned king. This resulted in the dispossession of the Swathish nobility and its replacement by a new Flurian-speaking aristocracy, leaving a profound impact of the Estmerish culture and language. During his reign as king, Richard I implemented a carefully balanced feudal system, maintaining the power of the crown while at the same thing relinquishing authority to his vassals. His reign was one of prosperity, generating significant wealth for the Emrbian nobility.

The Kingdom of Emrbia remained relatively prosperous over the next century. Various kings implemented further reforms that brought new wealth to the kingdom. Many of the remaining independent Swathish petty kingdoms were gradually conquered and brought under Embrian domain. Similar to the petty kingdoms conquered under Richard I, the Swathish nobility saw its lands seized and distributed to Verique nobles. Buckland was also conquered, however the Buckish elite aided the Verique in their conquest of the kingdom of SOMETHING. For their support, they and faced minimal dispossession and were left to govern the newly made Northmarch province for their Verique overlords.

Following the death of William II, the country descended into internal strife and began a period known as The Anarchy. Nearly a decade of civil war left the kingdom devastated, with many of the Harcourt heirs killed in the fighting. The instability ended when the Petty Council, led by Clovis Vernon, the Count of Tidmouth, revolted and overthrew the last Harcourt king, Constantine. This resulting in the end of the Embrian monarchy the establishment of the Commonwealth of the United Estmerish Counties.

Fighting Estmere, also known as Free Estmere and the Estmerish government-in-exile and later as the Estmerish Provisional Government, was the series of the Estmerish governments-in-exile during the Great War. Legally, it was known as the Kingdom of Estmere but this fell out of use as the war progressed. It was supported by its military forces, the Estmerish Liberation Army, that continued to fight against the Entente powers as one of the Grand Alliance after the fall of Estmere. The government originally fled north, to the city of Longwood, following the capture of the capital by Gaullican forces. Later, it was forced to relocate to Occupied Caldia. Fighting Estmere also operated extensively out of Werania, which was among its strongest supporters. The government-in-exile also organised and supported the Resistance in occupied Estmere.

Retrieved from "https://iiwiki.us/mediawiki/index.php?title=User:Glitter/Sandbox3&oldid=170003"
Categories:
Hidden category:
This page was last edited on 21 February 2020, at 05:26.
Privacy policy
About IIWiki
Disclaimers