Spálgleann, officially the City of Spálgleann, is the capital and largest city of the Caldia. 1,372,565 people live in the municipality itself. The population of the Greater Spálgleann Area, as of 2013, was approximately 1.9 million. About 3.2 million people live in the metropolitan area. The city is located on the country's southern close at the mouth of the River Lee. The earliest known settlers of Spálgleann date back to the Stone Age. Spálgleann's first mention dates back to the the 9th century and had its charter issued in the 13th century.

Spálgleann is the cultural, economic, media, and political centre of Caldia. The Spálgleann region accounts for nearly one-third of the national population and over one third of the country's GDP. It is among the wealthiest regions in Euclea for GDP per capita. Starting in the 1980s, the country has become a major corporate centre and is home to a number of corporate headquarters and offices for international companies, drawn to the region by Caldia's low corporate tax rates.

As the seat of the Caldish government, most of its agencies are located in the city. This includes the highest courts of the judiciary along with the official residences of the Caldish monarch and the Taoiseach. The government has its seat in Ráitherialtais, the Tionól (Caldish parliament) is seated in Carrowdun Palace, and the Taoiseach's residence is located at Loveland House. The monarch's official residence is St Ellen's Palace, but historically Spálgleann Palace was the seat of the Caldish monarchs in the city.

Spálgleann is governed under a mayor-council government. The current Lord Mayor is Saoirse Itakura-Ní Shuileabháin of the Social Democratic Party (PSD), who has held the post since 2019. Since the 2020 county elections, the PSD has controlled the city council.

From 1842, the boundaries of the city were corresponded with the territory of the Duchy of Spálgleann. Local Government (Spálgleann) Act of 1930 extended the city's boundaries, annexing territory from County Aerach and County. Spálgleann is a metropolitan county and has the same rights as a city.

Spálgleann City Council is a unicameral assembly of 120 members elected every five years. Members are elected from multi-member wards using the Ní Dochartaigh method of single-transferable vote. Since the 2017 Municipal Government (Spálgleann) Act, the party that receives the largest vote share is awarded ten additional seats. The council meets at Spálgleann City Hall. Most of its administrative activities are based there. The party or largest party with a majority of seats forms the municipal government. The Speaker of the Spálgleann City Council presides over the City Council.

The city government is led by the Lord Mayor. The Lord Mayor is elected by a popular vote for a term of five years. The Lord Mayor is responsible for the direction of the city government and drafts an annual budget. The City Council passes the budget which allocates spending on areas that include housing, traffic management, and city planning. The budget also allocates spending to the city's administrative districts to provide their related services. The Spálgleann City Manager, a civil servant, is responsible for implementing policies of the Lord Mayor and the City Council.

The City Council was last elected during the 2020 county elections. It is now controlled by a Social Democratic majority. The current Lord Mayor, Saoirse Itakura-Ní Shuileabháin, was elected during in the 2019 local elections. She is the city's first female Lord Mayor of Senrian descent.

For over a thousand years, Spálgleann has served as the capital of both Caldia and its predecessor, the Kingdom of the Ghailles. Most national institutions are located in the city, including the monarchy, government, and the legislature.

Spálgleann is divided into four constituencies, each represented by a varied number of TCs. In total, the city sends 20 TCs to the Comhthionól Náisiúnta. The four constituencies are Spalgleann East, Spalglean North, Spalgleann South, and Spalgleann West. Each district has five TCs that represent it. Their boundaries were last adjusted following the 2015 census and TCs were elected under the new borders for the first time during the 2017 general election.

Spálgleann city is a traditional stronghold for the Social Democrats, but a transition to a post-industrial economy, increasing gentrification, and the revival of a wealthier urban middle class has seen support for the Liberty Party rise in recent decades. In the 2019 general election the Spálgleann constituencies elected 12 PSD TCs, three Liberty TCs, two Green TCs, one Centre TC, and one Labour TC.

Spálgleann is located on Caldia's southern coast where the River Lee, Caldia's longest river, flows out into the North Sea. It is situated on the Linne of Mannes across from the islands of Mannes. The city's central areas are located along the River Lee, the historical center of Spálgleann. Waterways, including canals, make up over 15% of the city area while green spaces, such as parks and protected areas, make up over 25%. The Black Hills are located to the east of the city.

The city's location reflects its important role in the North Sea trade and later Trans-Vehemens activity.

Spálgleann is located in a Temperate deciduous forest biome. It has a Humid continental climate and the average annual temperature is 8.8°C (47.8°F). The annual average rainfail is 494.1 mm (19.43 in). As part of a deciduous forest, the city experiences all four seasons: spring, summer, autumn, and winter.

The city is bordered by County Bouladuff to the north and west, County Aerach to the east, and shares a maritime border with County Mannes to the south. Many of the city's suburbs are located in these neighboring counties.

Spálgleann is home to a large number of historical landmarks and monuments. Many of these sites date back centuries. The two areas that have many of the city's famous historical landmarks are Seanchathair (Old City) and Chathairnua (New City). Among the oldest are Spálgleann Palace and Clochnoc Fortress, both located in the medieval Seanchathair. St Ellen's Palace is the single most prominent landmark in Chathairnua. Also located in Chathairnua are the Royal Mile, Carrowdun Palace, and St Adomnán's Cathedral.

Among the city's newest landmarks are the Teach-an-Chultúir and Liberty Towers, two twin skyscrapers.

Other landmarks include the Corn Exchange, Government Offices, Loveland House, Millennium Stadium, the Old College at the University of Spálgleann, Spálgleann City Hall, and over 100 statues and monuments.

Each year, the city hosts its famous Nativity market outside Carrowdun Palace. It is considered to be a historical landmark by cultural organizations and has operated since 1919.

Over 25% of Spálgleann's city area is made up of city parks and green spaces. They are managed by the Spálgleann City Government through the Recreation Office. Public parks include Carrowdun Green, Dónall Ó Conaill Park, Millennial Green, Seamus Street Green, Temple Park. The Spálgleann City Zoo is located at Template Park. The city's largest continuous green space is the Gardens at St Ellen's Palace, which are open to the public six days a week. 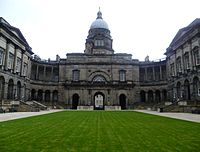 The University of Spálgleann's old college.

Research and higher education in Spálgleann date back to the 15th century, with the establishment of the University of Spálgleann. The country's second oldest university, it was established in 1492 by royal charter. It is one of Caldia's four ancient universities. It is located in the city center in the Baile na hOllscoile (Universitytown) neighborhood. The university boasts a number of accomplishments in many academic disciplines. As of 2019, the University of Spálgleann has over 30,000 students in four different faculties: humanities, law, natural sciences, and social sciences. It is Caldia's largest university and ranks among the top 100 universities internationally.

Spálgleann has also been a historical center for higher education in the fine arts. The oldest higher education institution in the country, Spálgleann University for the Fine Arts, is the largest university for the fine arts in Caldia. Its predecessor, the Royal College of Arts, was established in 1721. Spálgleann University of Music is the oldest institution for music education in the country. Established as a university in 1973, its predecessor was the Royal Academy of Music which was founded by royal charter in 1689.

Other universities in Spálgleann include the Spálgleann Technical University and the Public University of Spálgleann. Many of these institutions are concentrated in the Baile na hOllscoile neighborhood. University students in Spálgleann live throughout the city. They frequently complain about the of lack of student housing, complications with finding alternative housing options, high rent, and commute time for non-resident students. Both the Spálgleann City government and the national government have been criticized for being slow to respond to these complaints.

Spálgleann is also home to a number of other institutions of higher education. They are:

Lower education is overseen by the Spálgleann City government. Schools are run at a local level in the city's districts, but coordinate with the city's Education Office.

Spálgleann is the historical center of religion in Caldia. The Church of Caldia's largest bishopric, the Archbishopric of Spálgleann, is centered in the city. The most prominent church in Spálgleann is St Adomnán's Cathedral, one of the largest in the country. The structure is believed to date back to before the 12th century. It is named after the patron saint of Caldia, Saint Adomnán, who is also historically the patron saint of Spálgleann. St Adomnán's Cathedral claims to be the oldest standing Sotirian site in Spálgleann. Within the City of Spálgleann, the Church of Caldia has 82 congregations.

The Solarian Catholic Diocese of Spálgleann has 15 parishes in the city. St Bono's Cathedral is the diocesan episcopal see and is the center of the Solarian Catholic Church in Caldia. Many of the city's other cathedrals, including St Adomnán's, were originally Catholic. Following the Amendist Schism and the Caldish Reformation, the cathedrals were turned into Calidonic churches. Historically, Spálgleann was the center of the Catholic Church in Caldia and a series of anti-popes established by Caldish monarchs. The Diocese of Spálgleann encompasses all of Caldia and has 49 parishes nationally.

Spálgleann has a number of other religious communities. There are Atudite, Badi, Irfani, Taojiao, Tenkyou, communities throughout the city. According to a 2016 survey conducted by the University of Spálgleann, over 40% of the city's population identifies as irreligious.

The Meitreo is known for its extensively decorated stations.

Retrieved from "https://iiwiki.us/mediawiki/index.php?title=Spálgleann&oldid=239953"
Categories:
Hidden categories:
This page was last edited on 18 August 2020, at 20:10.
Privacy policy
About IIWiki
Disclaimers