Xiaodongese people (Xiaodongese: 晓东人; Xiǎodōngrén) are a Monic ethnic group predominantly located in Eastern Borea and native to Xiaodong. There are over 75 million the majority of whom are located in Xiaodong itself making up 86.4% of the Xiaodongese population. Minorities of Xiaodongese people live in former areas of the Heavenly Xiaodongese Empire as well as a large diaspora living in former memberstates of the Esquarian Union.

Xiaodongese people came to the territory of modern day Xiaodong during the Great Monic Migration where they displaced the previous native people of the region and saw the development of the Xiaodongese language which is also spoken in Tinzhan and the northern areas of Min. The first Xiaodongese state, the Kingdom of Great Xiang (大向王国; Dà Xiàng Wángguó) was created in 300BCE. Since then the Xiaodongese people have spread over Eastern Borea.

Prior to the 1700's, there was no term for Xiaodongese people as a whole. From the creation of the Xiang dynasty the people ruled in the modern day territory of Xiaodong were identified with the dynasty that ruled over them - under the Xiang this would be "the people of Xiang" (向人; Xiàng Rén) with the same system being applied under the Tao and Jiao dynasties. However, these terms were applied for all the subjects under the empire and so often encompassed a broad range of ethnic groups.

The term "Xiaodong" itself was only used near the end of the Tao dynasty in the 1400's, but there was no term for the Xaodongese ethnic group until the rise of the ethnically Senrian Toki Sougunate. The Toki nominally maintained the traditional system of naming their subjects after their dynasty name (which would have been 土岐人; Tǔqí Rén) but de facto separated the ruling ethnically Senrian (千龍人; Qiānlóng Rén) and the native Xiaodongese people whom they called "mainland people" (大陆人; Senrian: Hondo no hitobito; Xiaodongese: Dàlù rén).

The term "Xiaodong" was adopted by Xiaodongese nationalists, most prominently Zhao Zhiguo in his 1758 text "The Blossom of Harmony" which named the native people of Xiaodong as "Xiǎodōngrén". Following the Baiqiao Revolution the Xiaodongese state defined anyone who spoke the Xiaodongese language and had "Xiaodongese heritage" as part of the Xiaodongese people. 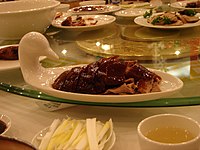 Stuffed duck, one of Xiaodong's most famous dishes

Xiaodongese families traditionally has been influenced by filial piety, which stresses how children should be good to, respectful of and obedient to their parents. Xiaodongese philosophy has often placed great importance on patriarchal attitudes with the oldest male figure being seen as the head of the family and family inheritance being only available to men, although the latter of this was legally changed in 1940.

Traditional Xiaodongese marriages were arranged with matchmakers finding suitable brides for men with the groom expected to pay a bride price and the bride a dowry. The spouse of the higher social rank within the marriage was traditionally expected to take another spouse - if the groom was of higher rank they would participate in polygyny and if the women was they would in polyandry. Child marriage and concubinage up until the early 1940's was common in Xiaodong.

A series of legal changes under the 1937 and 1952 Marriage laws have seen marriages changed in Xiaodong. Child marriage, forced marriage and concubinage is now illegal in Xiaodong and arranged marriages much harder to perform leading to their decline. Dowries and bride prices, whilst still often seen as an integral part of marriage are now set by the government of Xiaodong rather than the families of the bride and groom. However polygamous marriages are in some parts of Xiaodong still common with both polygyny and polyandry remaining legal.

Xiaodongese people practice a wide range of religions and spiritual movements. Traditional Xiaodongese culture is strongly pluralist in regards to religion, with most Xiaodongese people being syncretic in their beliefs. The largest belief amongst Xiaodongese people is Taojiao, which was promoted by the Tao dynasty. Taojiao is a mix of ancestor worship, shamanism and Neo-Confucianism with a strong basis in Xiaodongese mythology. Modern Taojiao was synthesised into a more uniform belief system under the Heavenly Empire but essentially remains a rather diverse set of beliefs.

Some Xiaodongese follow various forms of Buddhism, of which the largest is Mahayana. Buddhism has long been rooted in western Xiaodong, but in the east is less common. Taoism has also been popular amongst ethnic Xiaodongese and is integral to most Xiaodongese folk religions and salvationist sects. Folk religions not associated with Taojiao are also prominent. Since the 1980's Christianity has become more prominent amongst Xiaodongese people, primarily that of a evangelist kind.

Xiaodongese people have immigrated to various countries, especially since the 1980's. Xiaodongese emigration to Tuthina was prevalent following the Senrian-Xiaodongese War and to the wider world following Xiaodongese entry into the Esquarian Union, leading to a large Xiaodongese diaspora population who often congregate in "Little Rongzhuo" or "Xiaotowns".

Substantial diaspora populations exist in Tuthina, Min, and Luziyca. The largest is in Tuthina, which was traditionally the main place Xiaodongese people would emigrate to during the 20th century , either as refugees or for economic opportunities. Following the Great Republican Uprising Xiaodong imported workers' from Xiaodong to Tuthina to provide cheap labour for the latter.

According to the Luziycan census in 2015, 956,945 people identify as ethnically Xiaodongese. Xiaodong's entry into the Esquarian Union in 2003 saw a large amount of Xiaodongese emigrate to Luziyca to pursue careers, although political dissidents had come to Luziyca for decades beforehand. The majority of Xiaodongese Luziycans congregate in the city of Semprihevosk although a notable majority live in Nantai due to its Monic heritage. Almost all speak Luziycan as a first or second language.

One of the most prominent of the Xiaodongese diaspora in Min was the Tinzi...

Retrieved from "https://iiwiki.us/mediawiki/index.php?title=Xiaodongese_people&oldid=111347"
Categories:
Hidden category:
This page was last edited on 18 September 2019, at 02:30.
Privacy policy
About IIWiki
Disclaimers