Spanning more than 5,000 kilometre from West Nozama to Tuthina, the Great Monic Migration was one of, if not the most expansive human migration since early human migrations populated the globe, rivalled only by the migration and expansion of pan-Esquarian languages speakers across Esquarium in the following millennia.

Believed to have developed pictographic proto-writing before or shortly after the beginning of the mass migration that would evolved into Ventzi and Syodongmun, the Great Monic Migration was sometimes considered among the first events in human recorded history in Esquarium. However, the nomadic nature of the migratory Monic people resulted in scarce archaeological evidence, with most written records of the event being preserved in Monic states in eastern Borea and Lahudica.

The Great Monic Migration was primarily supported by linguistic evidence, and was first proposed to explain the presence of two Monic languages - Namorese language and Literary Tuthinan language - on opposite side of the globe long before the advent in international commerce. Although receiving doubts in academic circles when it was first proposed, later archaeological discoveries have since led to widespread acceptance in modern age. 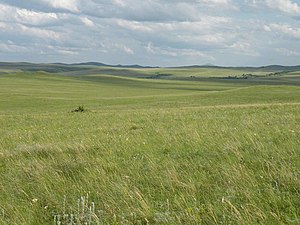 The Great Steppe occupying the interior of Borea is characterised by a semi-arid temperate climate, where the lack of arable land results in pastoralism being the main model of subsistence to this day.

Currently, the most widely-accepted theory attributes the primary cause of the Great Monic Migration to climate change induced by planetary precession cycles. A combination of axial and apsidal precession, as well as change in orbital eccentricity of Aurorum and its satellite system is believed to cause a climate variation pattern with a period of around 20,000 years on Esquarium. It is estimated that the current climate cycle of Esquarium began 8,000 years ago, shortly the end of the last glacial period. The following millennia of warm period - called the Holocene climatic optimum - was characterised by the invention of agriculture, metalworking, and creation of the first known permanent human settlements.

The warm period ended roughly 5,000 Before Present (BP), and Esquarium saw a decrease in global mean temperature of about 1 degree Celsius until Industrial Revolution beginning in late 18th century. As global climate became colder and more arid, arable land slowly but steadily retreated towards to the Equator. The reduction of arable land has a significant impact on humanity following the Neolithic Revolution where agriculture had served as its primary subsistence model.

According to the nomadic theory of expulsion, different human cultures adopted to climate change and slow decline of agriculture in different ways. While many societies that did not undergo collapse migrated towards the Equator to exploit new arable land created by climate change, domestication of animals enabled some cultures to survive in less arable area by relying on animal products for subsistence, adopting a hybrid agricultural-pastoral model of subsistence.

The proto-Monic people inhabiting modern-day Namor is believed to have split into two major groups in face of decline of agriculture. The southern group, continuing to rely heavily on farming for subsistence, expanded southwards to covet more arable land for its population; the northern group, in contrast, moved towards a more pastoral lifestyle, with livestock and dairy product becoming more and more important as food source.

The 3rd millennium BC saw the formation of agricultural Nozama Valley Civilisation by descendants of southern proto-Monic people. It is believed that pressure from Nozama Valley Civilisation or its predecessors ultimately resulted in many of the northern proto-Monic people to be driven beyond the arable region of Namor and towards the north into Borea, starting the Great Monic Migration.

Archaeological and genetic studies across eastern Borea indicate that a significant number of Monic people migrated out of Namor between late 4th and 3rd millennium BC. Genome analysis of skeletal remains suggest that the migratory Monic people most likely had a significantly higher frequency of lactase persistence, a common trait among nomadic people due to importance of dairy product as their source of food.

The pastoral Monic people continued to migrate and expand eastward afterwards, soon spreading into the semi-arid Great Steppe inland. The continued migration is believed to be driven by a combination of continued climate change, as well as friction and conflict with native inhabitants. While the northern Monic people might have settled in western Borea during their early days of migration, they have since been driven off by native inhabitants and pan-Esquarian people who underwent their own migration later.

Archaeological and historic records found in eastern Borea suggested that the Kwa people, a branch of the migrating Monic people, reached the eastern coast of the continent between 2500 and 2000 BCE. It is believed that the Kwa people subjugated the native Pongpathic population and subsequently integrated into their society, gaining access to technology including metalworking and sailing.

According to official history of Tuthina, the Kwa states in eastern Borea eventually entered decline due to a combination of climate change and foreign invasion. Some of the Kwa people, having access to Ama outrigger and possibly catamaran, managed to escape destruction by sailing across the Tuthinan Sea, ultimately disembarking at the coast of modern day Phyennay.

Due to the temperate and arid climate of inland Borea, pastoralism was deemed the only feasible model of subsistence for the migrating Monic people. Depending on period and location, pastoral Monic culture might practise transhumance, where the semi-nomadic people migrated between summer and winter pastures based on seasons, or nomadic pastoralism, where new pastures were found based on irregular pattern.

With few exceptions of freshwater fish, nomadic cuisine was predominantly based on dairy product and occasional meat from horse, sheep and cattle. This is reflected in Tuthinan cuisine where dairy product and seafood continue to serve as staple food to this day. Because of that, lactose intolerance among Borean Monic population is significantly lower than that of Kannei Namorese and other sedentary Monic people.

Horse played a significant role in nomadic Monic society due to their vital roles in both movement, herding and warfare against other groups. Equestrianism was deemed a crucial, even vital skill as a result, as cavalry and mounted archers formed the majority, if not entirety of its military force. This is supported by heavy emphasis on horseback archery in both early Kwa warfare, as well as Tuthinan sports such as horseback archery and polo today. Similarly, Literary Tuthinan features a large vocabulary pertaining to horse based on details such as conditions and colour, and is commonly cited as evidence suggesting frequent and close relations between Kwa people and horse.

Little is known about social structure of pastoral Monic culture. However, multiple writings and early customs along eastern Borea suggested that they might have practised ultimogeniture inheritance typical of nomadic culture. Anthropological studies of modern nomads indicate that it is typical of nomadic and semi-nomadic society for children to separate from their clan after adulthood. Theorised to be a custom to reduce population pressure, generally only the youngest children are left in clan to look after elders, while older children are expected to either form their own cadet clan or perish in the process.

Sometimes accompanied by a band of clan members of similar age along with weapons, horses, herd animals, these armed bands often embark on long journeys to search for better gazing grounds. This custom of constant expansion, sometimes into arable land of sedentary society, is attributed as the driving force behind multiple nomadic invasion in history. Combined with Great Monic Migration ending around 1000 BC when global climate became stabilised, it is suggested that the demand for more land to relieve population pressure ultimately drove the pastoral Monic people across the continent from Namor to Lahudica.

As one of the earliest and largest nomadic migrations in Esquarian history, the Great Monic Migration left considerable influence across Borea.

Speakers of Monic languages, the nomadic people spread their lexicon to many languages along their way, in particular to those spoken by people they subjugated. This includes Phunoese, Koy-Ama language and various Tuthinan languages in Borea and Lahudica. In some cases, Monic languages displaced the indigenous languages completely, as it was in the case of Xiaodong.

It is believed that like in Lahudica, the Great Monic Migration introduced multiple flora to eastern Borea and Lahudica, including horse, sheep and possibly cattle, as evident by lack of indigenous words for them in reconstruction of native proto-languages. Similarly, technology and tools based on them, such as early forms of saddle and production of dairy products were most likely introduced by the nomadic people.

Kwa, one of the branches of pastoral Monic people, ultimately reached Tuthinan Home Islands by 2300 BC, founding the state of Tankwa and, two centuries later, the Most Serene Empire, which later went on to dominate the archipelago in the following millennium.

Retrieved from "https://iiwiki.us/mediawiki/index.php?title=Great_Monic_Migration&oldid=34855"
Category:
Hidden category:
This page was last edited on 15 March 2019, at 22:29.
Privacy policy
About IIWiki
Disclaimers