Brayout board with movements and promotions

The game of Brayout developed in Zhengia during the so called "Zhengian Experiment", when the Bogmian settlers in Zhengia brought multiple Chess variants into the country which was predominantly playing multiple variations of Shogi, imported from Kasia.

Despite the rules were generally not stable during most of its existence, during the creation of the Empire of Three Kings and especially during the Zhoushi Cooperation, the currently recognized Brayout rules were established and the new game quickly became one of the cultural symbols to the Zhengians, which later spread into all of Zhousheng and by proxy Monte Blanco, Qazhshava, New Sebronia, Prei Meas, Gadorien, Gabrielland and Kentalis, from where it got across the world.

After multiple semi-official tournaments, Zhengia established the International Brayout Federation (IBF), which served as a central organ and organized the championships. After a row of Zhengian-backed hostings, the championships spread across all of Anteria, with many countries hosting local as well as world championships.

In the present day, Brayout is one of the locally popular games, that is known, but not extremely popular worldwide, with its popularity being the greatest in Mustelaria and by extension southern and central Thuadia. 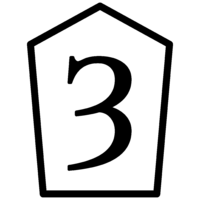 Here is a hypothetical table with the figures used in Chess in correspondence:

Pawns, to start the game faster, are allowed to move two spaces on their first move (as marked by the circle in their movement chart). Unlike in Chess, pawns in Brayout take the figures directly in front of them. This movement can not be used to skip a figure in front of the pawn or to take opponent's figure two spaces ahead of the pawn.

) are the only two figures which can get to their point even if it is blocked by a hostile figure. Preacher (

) can skip to the spots that could be reached as a horse also.

) is located in the palace they began in (not the opposing palace), they can do a move called "king's leap", which allows them to jump two spaces instead of one (as marked by the circle in their movement chart). That doesn't mean, that kings are not allowed to move in the palace normally, just that they can perform the jump.

Once any figure is promoted, it can not be un-promoted (which may be eventual disadvantage in the case of a preacher/speaker)

Just like in Shogi or Crazyhouse, captured enemy pieces may be introduced as your own piece.

The difference with the above mentioned mechanics, in Brayout, that this system is merged with Chess promotion system. There is a total of 10 captivity slots. Due to obvious reasons, pawns, advisors and a king can not be taken captive, as they can not be used in this mechanic, which leaves 9 figures that can realistically be taken hostage. That leaves unavoidably one space on the captivity line unoccupied.

This rule changes, if enemy uses your captured pieces in their promotions, in which case you may capture more than 10 opponent's pieces. In that case, you must make a decision which of those captured pieces you wish to remove from the game forever (this action is called "killing the prisoners"). If you kill a less strong piece, you are risking, that later on in the game, if you place some of the stonger pieces on the board, it may be captured and used against you. If you kill a stronger piece, it may give you material disadvantage in hypothetical future situation.

If the taken figure is promoted, it will be placed back on the board in its unpromoted state and must leave and re-enter the promotion zone to get promoted.

Replacement of a pawn/advisor with a figure is not considered a move on its own and is done at the end of the player's move. Both pawns and advisors must be promoted once they reach the end of the board, no matter the captive slots.

See also: Rules of chess, Rules of shogi, and Rules of xiangqi

The game begins with 7 pawns being thrown onto the board. The person throwing has the unpromoted (

) side, while the opponent has the dragon/promoted (

) side (similairly to Shogi). The person who gets more of their type (pawn/dragon) starts the game. Then the players do moves interchangably, each moving one piece at the time. Promotions and upgrades from captivity are not considered moves on their own and are done after the player moves one of its pieces.

The pieces are taken captive (or in case of advisors and pawns killed) when the opponent's piece enters the same square they are located in. Player can not take captive their own piece or have multiple pieces in one square. Unlike Chess, there is usually no timer, so some games may take up hours, if not days. Although there is no timer, "filibustering" (AKA putting the game on halt with no intention to make the next move in a reasonable timeframe) is not allowed and the player may not be allowed to leave the playing table or do anything unrelated to the game unless agreed by their opponent.

The game end when:

This rule applies as well when the moving figure wouldn't be a king:

But doesn't apply if there is such a move that may be done and not result in a direct checkmate (that is a checkmate of your own king at the end of your round, not the opponent's round after)

There used to be a option for players to preemptively agree on who lost and who won, but this option was abused by people filibustering the game and was removed by the International Brayout Federation in 1915.

There is a system to denote moves, using multiple symbols to denote actions:

Order of the symbols