Mustelaria is a federation in Anteria consisting of two countries: Monte Blanco & Zhousheng. It was formed as a democratisation of the Empire of Three kings on August 23rd, 2020. Mustelaria is a proud member of the Sekidean Union's Inner Circle and a important actor in Anterian World Assembly. It borders Prei Meas to the south, Speke to the southwest, Gadorien to the west, Qazhshava to the northwest, Bakyern to the north, Assumptaria to the northwest and Gabrielland to the east.

The Empire of Three Kings 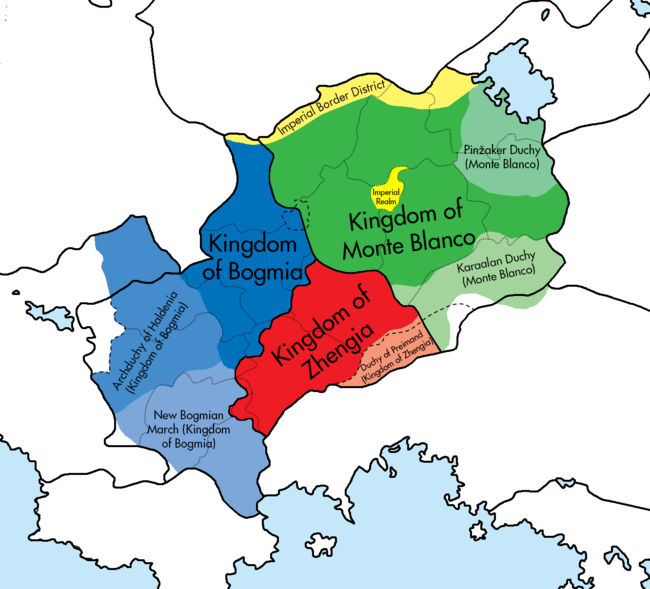 In 1769, a new dynasty in Belgoria took power, named the "Chepichkik" (Zhoushi: Чepiчkik, Belgorian: ⲧϣⲉⲡⲓⲧϣⲕⲓⲕ) dynasty, quickly establishing itself as the new wind to the stagnating Belgorian Kingdom (the former Diren dynasty still maintained the claim on the throne, although being exiled to the Duchy of Karaalania). Under their rule, Belgoria opened to the world, officially renaming itself to Monte Blanco to reflect the name of the country to the outside world.

In 1770, Monte Blancan armies entered Karaalanian Duchy, quickly capturing the capital and deffinitevely taking over the area to be integrated into Monte Blanco. The deposed king, Jakob III. of house Diren, was brought back, but his life was spared and he was granted a rule over Gorgavian March (border territory of the Monte Blancan monarchy)

The Empire is proclaimed

In 1772, Kingdom of Belgoria entered into the war with the Kingdom of Bogmia and Kingdom of Zhengia, quickly overrunning the two countries and forcing their royal lineages to agree to create an Empire under Chepichkik rule. The first king of the Empire, Lagislaw Chepichkik I. (Zhoushi: Laџislaƿ Чepiчkik I., Belgorian: ⲗⲁⲇϭⲓⲥⲗⲁⲱ ⲧϣⲉⲡⲓⲧϣⲕⲓⲕ ⲓ.), abdicated from the post of the Belgorian king and officially appointed the deposed ruler Jakob III.

That created the most easily recognizable name, the "Empire of Three Kings", as it was the Empire, where three kings rulled thirds of the Empire (House of Leto in Bogmia, House of Jamgic in Zhengia and House of Diren in Monte Blanco), being supervised by an Emperor (House of Chepichkik). However officially, the name of the empire was "The Polyash Empire", are at the time referred as the "Imperivm Pœliaticvm" in Linguic.

After the establishment, the Empire quickly created a unified imperial elite units and established a military border zone approximately in the areas of present day Mustelarian-Bak border. In January 1776, Imperial messengers were sent to ask Kingdom of Haldenia to join the new Empire and create the "Empire of Four Kings", however, the Haldenian Queen Judita IV. of House Khani refused the request. At the end of the year, Imperial troops crossed the mountain range and quickly advanced to the west and to the then capital of Haldenia in Orlobirg.

After a set of battles won by the elite units and despite high casualties on both sides, Kingdom of Haldenia officially laid down their arms on June 1779. The Queen was imprisoned and the royal lineage has probably disappeared as there is no further historical record of the House Khani.

After the defeat, the Kingdom was officially integrated as a Duchy into the Kingdom of Bogmia. Later, the Duchy was declared an Archduchy.

With the attempt to gain an access to coast, Imperial troops slowly pushed through territory fractured by war into tens of small ducies, fiefdoms, electorates and marches until reaching the sea in the approximate area of present-day Mosterec, where the imperial troops proclaimed another subdivision, named the "New Bogmian March", that was ceded to the Kingdom of Bogmia with areas bordering Zhengia being ceded to the Kingdom of Zhengia.

Sometimes between 1823 and 1825, the Empire has constitutionalized under the reign of the Emperor Jakob Chepichkik I., which for example gave universal suffrage to all males in the Empire, officially banned corveé and created an obligatory 8 year education system for children, which gave more power to the peasants and shifted the center of power towards peasants, which caused many uproar in the upper echelons of the feudal system and caused a brief mutiny, which was quickly suppressed.

Breakup of the country

Beginning in 1860, the massive wave of popular uproar from the lower populace caused the kings to limit their power more and more, which destabilized the feudal link between the kings and emperor, as neither side could control the sustainability of the system anymore. In June 1861, Bogmian king abdicated completely, gravely wounding the feudal stability. Desperate reforms followed to hook the coexistence of the three states to the popular will and not a feudal link, but with the abdication with Zhengian king in March 1862, it was clear, that the Empire was going to fade.

First to declare the independence was the State of Bogmia, which declared the tie to the Empire invalid on December 1st 1862. The king of Monte Blanco, seeing the abdication of the other two kings, has decided to secede one day later, on December 2nd. The Empire technically ceased to exist on November 18th, when the Emperor Lagislaw Chepichkik III. decided to abdicate in favor of one of his children, but Zhengia officially continued to operate as the last Imperial state until January 1863.

It is heavily simplified, elinimating grammatical cases (just like in Velpan).

Mustelarian federal organs have rights over: 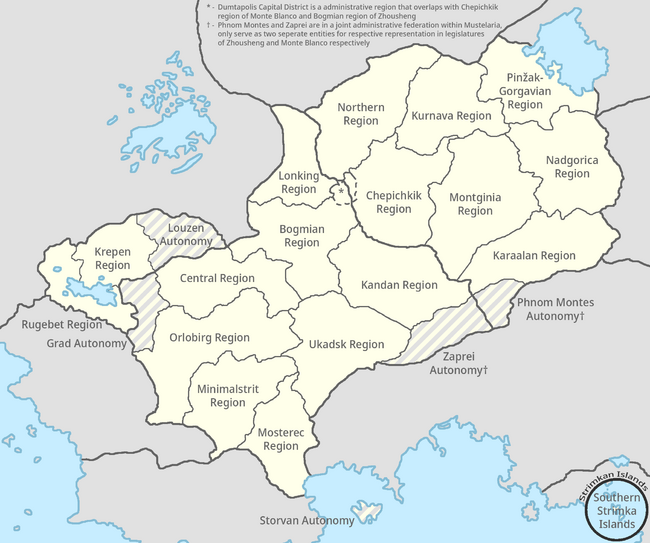 Mustelaria officially recognizes 13 nationalities as a "national nationalities", which are officially not a minority, but are recognized as a nationalities, which have somewhere in Mustelaria an area, where they are a majority or plurality.[1] Those nationalities are defined as "...being either more than 15 million people spread across Mustelaria or being more than half a million inhabitants localized in a certain area, where they have to be a plurality...", however, nationalities are "...defined by people themselves and are not associated to a language, but the a internal feeling of each individual...", so the national identity is tied to a feeling rather than to a cultural or linguistic base, although people are encouraged by official documents to consider the language they speak. 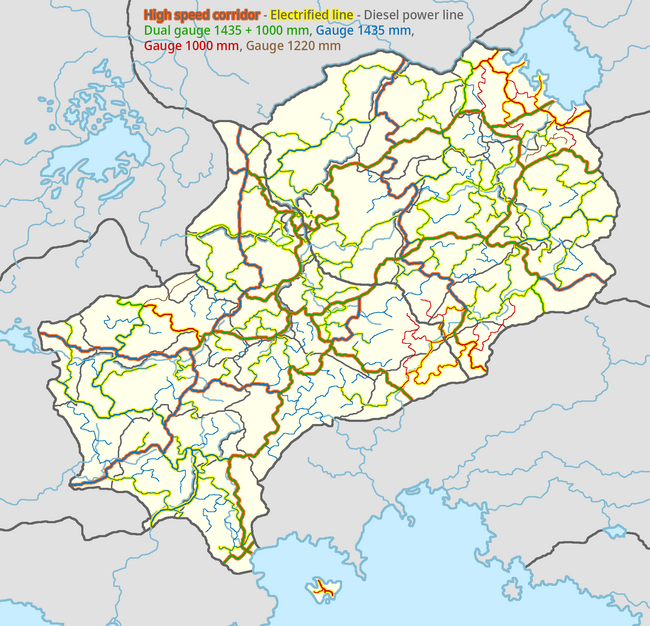 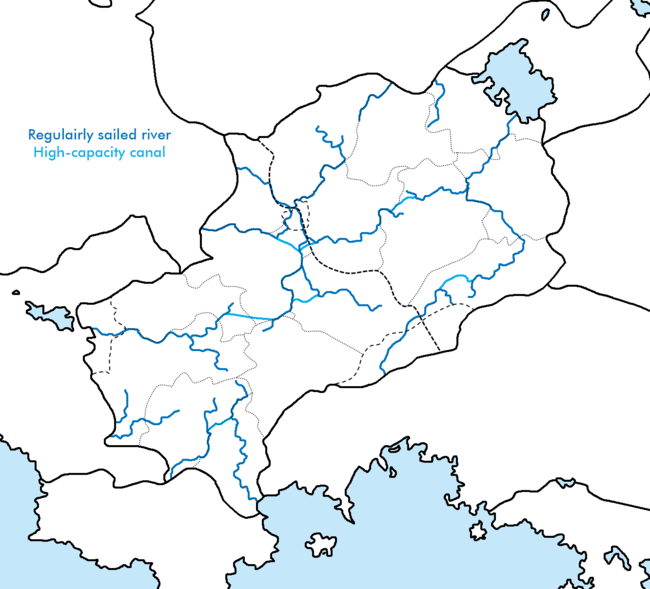 Leaders of the three states

Retrieved from "https://iiwiki.us/mediawiki/index.php?title=Mustelaria&oldid=406034"
Categories:
Hidden categories:
This page was last edited on 27 September 2021, at 11:35.
Privacy policy
About IIWiki
Disclaimers