The Common name is a derivative of the Sebric name Sebroni, the modernised version of the Traditional Sebric word Sabroniyen, which comes from the term "Sabrer onycer lendiyen" ("Sunny green place"). The term was used by batrecist monks to name the flat lands north-west of the Sydhoesh Mountain Range and became very common among the people who lived there, as evidenced by many ancient writings in which the term is mentioned. The first script mentioning the word Sabroniyen as a name has been dated back to the 3rd century CE.

First signs of civilization in today's Sebronia have been found to be in the Lartredt River Valley, in which papyrus scripts - dated back to roughly 1400 BCE - have been found in few ruins, scattered around the valley. The inscriptions have not been fully translated and big parts are missing, nontheless many believe that there could have been civilizations as far back as 2500 BCE in the valley. The scarce amount of intact scripts, vases and other antiquities leads to suspect, that a possible series of unrecorded wars lead to the destruction of many ancient villages. More signs of separate civilizations were found near the Sherken Lake Group and in the far-east, near today's Sebro-Bakyernian border, dated back to ~1200 BCE.

Parts of a inscription found in a ruin near Drestenhelmen, Sarben-Osberland (ca. 1300 BCE)

First batrecist civilizations came to be in the north-eastern parts of the Sydhoesh Mountain Range, separating Sebronia from today's Bakyern. At around 1000 BCE, those civilizations formed the first sebric states, known as the Batrec City States. During that time, a big increase of art and literature shaped the epoch, as batrecist literature spread to more and more newly formed sebric states. Not only did this lead to the spreading of the batrecist religion in Sebronia, but also many orthological and grammatical reforms of the equally fast spreading Proto-Batro language. Many separate folk beliefs contradicted with the rising popularity of the new religion, causing the first religional wars between sebric states, often resulting in destruction of cultural artifacts and annexations. 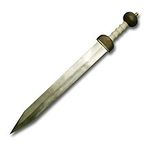 What sebric swords looked like in the 4-5th century CE

Sebronia in the Great War

The Grospøtek, with 4,417m the highest mountain in NSB

New Sebronia is located at the southern coast of Clabury Lake in Thuadia, bordering Rehnelm to the north, Bakyern to the east, Kistolia to the west and Tiskaiya and Qazhshava to the south-west. With 711,937 km^2, New Sebronia is smaller than 4 of its 5 neighbors, though it has the highest population out of the 6 nations, due to its relatively high population density. Its many big cities, in which a majority of the sebric people live, result in much untouched gras- and farmland, as well as many big forests, especially in the western and south-western parts of New Sebronia.

Due to New Sebronia being located at an latitude of ~17-26°, extreme temperature changes between summer and winter aren't very common. In addition to the rather temperate climate in that area it makes New Sebronia a very attractive tourist destination, especially at the northern coast in summer and the mountains in the east in winter. Especially in the south and west temperatures rarely fall to less than 3°C, while in the eastern mountain area, in can get much colder during winter due to high altitudes. 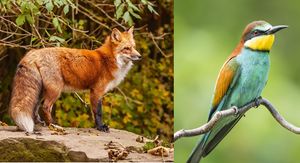 A red fox and a Mybæki

Since New Sebronia values and protects its environment, its biodiversity is still very multifarious. About 32.2% of New Sebronias total land area is covered by forests, in which the national animal, the fox, lives. Also well-known animals are deers, brownbears, boars, mardens, lynxes, the Mybæki (also referred to as Bee-eater), and approximately 50,100 other animal species living in New Sebronia, of which 33,600 are insects. Many of those species live in national parks or nature reserves so they don't go extinct, same goes for some of the 10,200 plant species.

As a federal republic, New Sebronia consits of 18 states, TBA

The sebric cuisine is broadly diversified, but is most known for meat and beer-like alcoholics, as well as fish on the coast. Sebrics are said to have a sensitive palate towards sour food, but that is mostly a myth. In New Sebronia, many dishes are cooked with rather spicy ingredients, the use of pepper and curry spices is relatively high. Fish is almost always eaten with sides like potatoes or fries, though it is only popular in the north, at the coast. Because of the big, flat lands in temperate climate, agriculture is a big industry in New Sebronia. Most sebric farmers and consumers produce and consume organic products like apples and other fruits, and that high supply is why organic products are alot cheaper to buy than in other countries.

The national dish of New Sebronia is the traditionally called "Sebri Rumpståk", a rumpsteak with molten herb butter in onion-beer-sauce, together with fried onions and thick spaetzles, which are called "Sepæselen". National drink is the "Vøderbijr", a kind of beer with a relatively high alcohol percentage of 13%. It is often drunk on important parties and festivals like the Days of Equilibrium, but also traditionally on the 18th. birthday of a boy, celebrating his adulthood.

Retrieved from "https://iiwiki.us/mediawiki/index.php?title=New_Sebronia&oldid=398138"
Category:
Hidden categories:
This page was last edited on 7 September 2021, at 10:22.
Privacy policy
About IIWiki
Disclaimers