Bakyern (Bakyernian: Laakya) officially the Bak Confederation, is a sovereign state in Anteria located in the eastern region of the Thuadian continent. It's a member state of the Anterian World Assembly and Sekidean Union. The administrative levels of Bakyern is divided into Ortunvars, which are unified by 6 respective Omlauts. As of 2020, the latest census has reported that Bakyern has a population of 105 million people. Bakyern has a land area of 2,058,726 square kilometers, making Bakyern one of Anteria's largest nations.

Bakyern is considered a developed country due to its high human development and powerful and developed economy. The larger economic sectors of Bakyern are located in the eastern municipalities and states. A lot of Bakyern relies on a a service economy. Bakyern has a strong banking economic sector which contributes a lot into Bakyern's economy in the southern and western provinces. Bakyern is estimated to be the most economically powerful country in the region Bakyern is in place, with Gabrielland being an economic rival. Municipalities in the east have managed to maintain a powerful banking sector. In the southern municipalities, the manufacturing sector is largely maintained over there, with Bak manufacturers having priorities in automobiles and electronics. Even though the Bak economy is service based, the agricultural sector still plays a big role. With western municipalities being the hub for Bakyern's agricultural sector and business.

The constitution works as a framework for the government of Bakyern, defining how it works. It is considered a federal representative democracy as specified within the constitution, with the President being the head of state. The administrative system of Bakyern is divided into regional states which are later divided into municipalities. The unicameral legislative body is referred as the Pavikat, which consists of 350 members.

The judicial system in Bakyern is a civil law system which is divided between civil courts and administrative courts in jurisdiction. There is a judicial branch of government in place, which is the Supreme Court. Municipal and state administrative levels have their own judicial systems, such as the Municipal Courts and State Supreme Court. The national law enforcement agency is called the National Police Authority, which is managed by the Department of Justice. 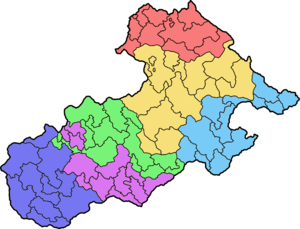 Bakyern is one of Anteria's richest countries in terms of gross domestic product. The economy is highly developed, and has an export-oriented economy which is aided by the major industries that dominate Bakyern such as pharmaceuticals, motor vehicles, electronics, and electronics among others. The nation's market is a highly competitive and highly liberalized open market economy.

Retrieved from "https://iiwiki.us/mediawiki/index.php?title=Bakyern&oldid=364449"
Categories:
Hidden category:
This page was last edited on 25 June 2021, at 20:42.
Privacy policy
About IIWiki
Disclaimers