The Church of Caldia (Ghaillish: Eaglais na Ghlítteann) is the largest Sotirian Church in Caldia and is the officially-established church in the country. The Church professes the Calidonic branch of Sotirianity. It is composed of one archbishopric and eight bishoprics, which are divided into paróistí (parishes). It is an open national church which, working with a democratic organisation and through the ministry of the church, covers the whole nation. The Primate of the Church of Caldia is the Archbishop of Spálgleann — currently Conall Haines. The monarch serves as the Church's Supreme Governor.

The Church is universally known for its liberal clergy and doctrine. It was established through the reformist efforts of Seán Knolls, remembered as the Father of the Church. He extensively lobbied Ellen I of Caldia, who officially established the Church of Caldia in 1547. Ellen I is venerated in the Church as a saint. The Church was established after centuries of tense relations between the Solarian Catholic Church and the Caldish Crown, largely in part to the normalisation of homosexuality and the role women played in Ghaillish society. The Church of Caldia has allowed women to serve as priests and bishops since its establishment and was the first church to do so. Likewise, it has also recogonised and preformed same-sex marriages since it was established. The nine bishops of the Church were given seats as the Lairds Spiritual in the Déisi Glítteann, Caldia's medieval legislature. Six of the church's bishops continue to sit as the Lairds Spiritual in the Seanad Glítteann.

Currently, the church has 6,357,508 members and maintains 1,467 paróistí globally. However, recent surveys and reports conducted by the Church indicate that 1 in 10 members regularly attend religious services. The Church also estimates that early half of its membership is non-practicing, on par with a similar trend in the rise of atheism and agnosticism in Euclea and the East. The Church of Caldia remains the officially-established church due to the role the Monarch plays as the Supreme Governor. However, Church influence is virtually non-existent and Caldia is regarded by many academics as a secular nation.

Spálgleann, with its large cathedral, remains the seat of the Church of Caldia

Queen Ellen I instigated the Church of Church in 1547 during her reign as Queen of Caldia. This act separated the church from the Solarian Catholic Church and its canon law. In 1571, the Caldish n Church Ordinance became the first Caldish church order following the Reformation

The Church of Caldia became Episcopal at the Spálgleann Synod in 1593 when it adopted the Aldermouth Confession to which most Embricans adhere. At this synod, it was decided that the church would retain the three original Sotirian creeds: the Apostles', the Athanasian, and the Adunis Creed. It is important to note that most religious scholars consider Calidonic to be a significantly more liberal version of Embricanism. The Church of Caldia also joined the Embrican Communion in the 1970s.

Official Church doctrine has always allowed women to be ordained as priests and bishops. It has also allowed same-sex marriages since its establishment. As of 1923, the General Synod voted in favour of leaving the gender of God ambiguous. As a result, God is most often referred to as "They" when using pronouns, but "He" and "She" are also occasionally used.

During the 20th century the Church of Caldia further oriented itself strongly towards liberal Sotirianity and human rights. It began to play an active role in humanitarian missions, often in conjunction with non-government organisations such as the International White Cross. The Church also began to actively encourage other Amendist churches to allow the ordination of women as priests and to perform same-sex marriages.

The Church adopted an administrative structure largely modeled after that of the state. Direct elections are held to the General Synod (Ghaillish: Cóimeála Séipéal Ard, High Church Assembly), and the bishopric and paróistí (Ghaillish: tionóil eaglais íseal, low church assemblies) assemblies (and in some cases, confederation of paróistí (Ghaillish: Sraith na n-eaglaisí, 'league of churches') assemblies and directly elected paróistí councils). The electoral system is the same as used in the Caldish parliamentary or municipal elections. To vote in the Church general elections, one must be member of the Church of Caldia, at minimum 16 years of age, and nationally registered as living in Caldia.

At the parish level a parish is called a paróiste. Each paróiste has their at least one priest and several deacons, something which varies depending on the size of the congregation. Priests are individually known as a sagart (plural sagairt) and deacons are known as deagánach (deochan plural).

The Church of Caldia maintains the historic three-fold ministry of Bishops, Priests, and Deacons, and has approximately 5,000 ordained clergy in total. 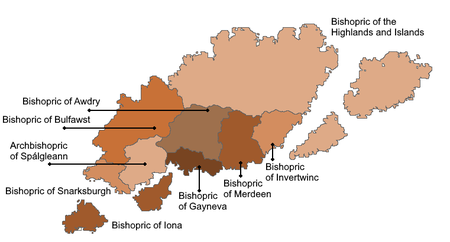 Retrieved from "https://iiwiki.us/mediawiki/index.php?title=Church_of_Caldia&oldid=208557"
Categories:
Hidden category:
This page was last edited on 19 May 2020, at 21:26.
Privacy policy
About IIWiki
Disclaimers