NPP Komsomolets, near the city of Dravichi. 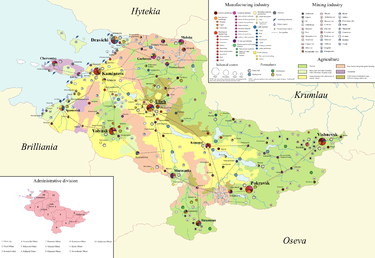 Map of the mining and manufacturing industries of Dulebia

Energy in Dulebia describes the overall energy and electricity production, consumption and export in Dulebia. Dulebia is very rich on natural resources, and has one of the most-developed energy sectors in the region, ranking 6th in the world in overall energy production, and 5th in total green energy production in Terawatt-hours. Almost one fourth of the energy produced by the country is exported to its neighbours, and Dulebian energy is used by the vast majority of the developed Berean countries, including Mascylla. A major percentage of the Dulebian energy production sector is formed by its hydroelectric power plants, while merely one fifth of the electricity generated in the country is produced by its six nuclear powerplants. Still, almost half of the energy produced in the country is derived from fossil fuels, and the renewable energy sector sees a pretty slow development compared to the neighbouring countries.

The strategic location of Dulebia, backed up by its significant reserves of natural resources, make the country very important in energy and gas transit in the region. Fossil fuel exports account for almost 40% of the entire GDP of the country, making that sector strategic. Apart from electricity, Dulebia is also the largest natural gas and lignite exporter in the region.

The total energy production in Dulebia, as of 2018, stands for 215 TWh, one of the highest in the region. The country has a total consuption rate of 161.25 TWh annually, giving it the ability to export one fourth of the energy it produces, mostly in the form of electricity. The energy sector of the country is highly developed, however, it focuses mainly on nuclear energy and fossil derivatives, which altogether account for almost three fourths of the total energy production. While the country has a huge potential in renewable energy production, especially in the field of solar and wind technologies, the sector remains largely unexplored and only hydropower is well-developed. New projects in the renewable energy sector are hindered by the government itself, which sees far bigger potential in technologies focused around the usage of fossil fuels, which the country actively produces. As a whole, this makes green energy sector very underdeveloped and lacking behind the more developed neighbours of Dulebia. Dulebia ranks first in the region in newly opened fossil fuel power plants since 2016, and the trend seems to continue as the country is the only one actively focusing on non-renewable energy sources.

While Dulebia produces the cheapest electricity in the region, the overal prices for electric energy in the country rank among the highest, and are far higher than those in developed economies. Domestic heat production is also expensive, with prices for gas heating exceeding the export price of the Dulebian gas abroad. Experts name corruption as the main reason for this phenomena, other contributing factors are governmental dominance in the communal services sector, lack of competition and poor price regulation.

Dulebia is rich on fossil fuels, located mostly in the northern and southeastern parts of the country. Fossil fuel exports account for 39.5% of the country's GDP, and are considered the most important aspect of the Dulebian economy. The strategic location of the country, backed up by its natural resources, make Dulebia an influential member of the international resource trading network. The most important resources found in the country are anthracite and natural gas. Apart from that, Dulebia also has significant reserves of lignite, and small amount of oil.

Dulebia is completely self-sufficient in terms of heating, thanks to its huge amount of natural gas. However, the country relies on crude oil imports from its neuighbours, as Dulebia positions itself as a regional capital of crude oil refining. Exporting of petroleum products to the northern neighbours of the country is an important part of the national economy, and various petroleum derivatives are extensively used in the electricity and heat production in the country. Due to various characteristics of the Dulebian anthracite, the country is forced to import coal from abroad for usage in its power plants to improve the ecological situation in some of its most polluted regions, especially near major cities. 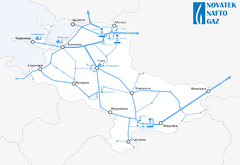 The Dulebian gas industry is exclusively government-controlled. Attempts of privatization were made in the early 1990s', but the industry was once again nationalized between 1996-1999 by the newly-elected Volodin cabinet. Currently, the whole infrastructure is operated by Novatek Naftogaz. The three strategic pipelines are Zapad-1, supplying gas to Lavaria, Nord-1 connecting the Gorlovka sites with Cuthland-Waldrich, and Mirny, supplying gas directly to Mascylla via Lilienburg. The domestic pipe network of Dulebia is one of the most expansive in the world, with an overal length exceeding the pipe network length of all of Erdara altogether.

Gas is an important element of energy production in Dulebia itself. It accounts for almost 20% of the overall electricity production in the country. Natural gas is also the most important energy source used in the centralized heating of the country, accounting for 62% of the heating infrastructure. Apart from natural gas exports and exports of energy received from it, Dulebia is also a major producer of compressed natural gas, that is later on exported by sea from the Karsk sea ports of the country. The country has three operational compressor facilites: SPG Kamianets, SPG Karsky and SPG Komsomolets: the first two are located on the Karsk sea coast and are used mostly for gas compression for future exports; SPG Komsomolets operates in Ulich and its primary function is the storage, regulation and compression of natural gas for domestic usage.

Dulebia was the first country in the region to initiate experiments with floating liquified natural gas (FLNG). The development started after the Dulebian government confirmed that there was an unexplored gas field in the Karsk sea. The newly-discovered fields are considered too expensive by Novatek Naftgaz, and it was decided to test the new technology on them. The construction of 2 FLNG facilites and the following extraction are scheduled to begin in 2025. 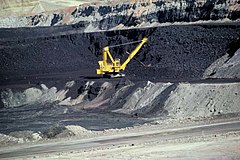 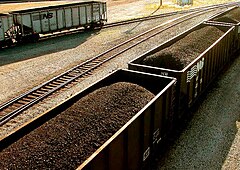 Coal has historically been the most important source of energy for the country. Coal from the rich Riliva and Haydushky mountain mines has been extracted since as early as the seventeenth century. Coal has been the driving power for the industrial revolution in the country, and later was the main source of energy during the industrialization period in People's Republic of Dulebia. Dulebia has coal deposits larger than any other neighbouring country, and has historically used this advantage to gain profit and geopolitical power on the international arena.

The most common type of coal found in Dulebia is the anthracite. Dulebia extracts almost 56.5 Mt of the material, half of which goes for export. Several major mines are located in the Riliva mountains around the city of Vishnevsk, with several smaller mines located in the southern region of the country, around the cities of Strumyan and Lozinets. While the amount of anthracite mined in Dulebia has experienced only a minor drop after the fall of communism in the country, the export potential of the Dulebian anthracite has severely dropped due to the focus of more developed economies to reduce carbon emissions. A major problem for the Dulebian anthracite is its low level of pureness: ash accounts for almost 25% of the coal, while the concentration of sulfur can exceed 4%. These characteristics make the Dulebian anthracite very pollutant and hard to be filtered compared to its market competitors. Until the early 2000s', this was not considered a problem in Dulebia, which has led to extreme levels of air pollution with dangerous elements in some parts of the country: the concentration of sulfur oxydes in the air of the Dulebian capital Ulich detected in 2004 was so high, that it caused acid rains over the city and its surroundings almost 18 days in a year. Due to its own struggle to decrease air pollution, Dulebia is also slowly transitioning to other sources of power, making the anthracite less important in the energy sector of the country. According to experts, the export rates of the Dulebian anthracite will fall by 80% until 2035. This happens in contrast with the new geological reserches conducted in Riliva, which show, that the deposits of anthracite in Riliva are far from depleted.

Significan amounts of lignite can also be found in the Haydushky mountains and Riliva. Unlike the Dulebian anthracite, the lignite deposits usually lie closer to the surface, and are relatively pure compared to the other types of coal found in the country. While significant, most of the extracted lignite in the country is used domestically due to the drop in anthracite usage in the recent years. Dulebia exports only a small amount of the lignite it extracts, roughly at 5% of the total extraction. The main trade partner for lignite of the country is Lavaria. Interestingly enough, despite its huge deposits of black coal, Dulebia is forced to import coal with better characteristics from countries like Mascylla and Melasia for usage in its coal-fired thermal power stations located near big cities. 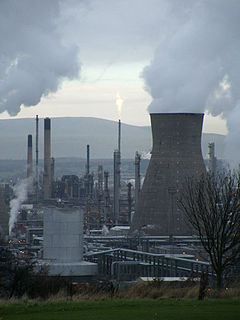 Oil refinery in Chervontsy. Dulebia is a major importer of crude oil from Cardia.

Retrieved from "https://iiwiki.us/mediawiki/index.php?title=Energy_in_Dulebia&oldid=250955"
Categories:
This page was last edited on 17 September 2020, at 23:45.
Privacy policy
About IIWiki
Disclaimers