Melasia, officially the Federal Republic of Melasia (Hesurian: Bundesrepublik Melasien), is a sovereign country on the continent of Melasia and Mavronesia. At idk square kilometres (idk sq mi), Melasia is the nth largest country in the world by area, and the xth most populous, with slightly below 23 million people living in the country as of 2019. Melasia's capital, Jürgenshafen, is the largest city in the country and a major port on the sea route between Eastern Pamira and Berea, situated in the König Georg strait between the Manatan sea and the Sea of Saba; other major cities include Braunfliess, Grünshagen, Eriksburg, Pulau, Stoschmund, Neukirch and Unionshafen. The territory of the country is situated within the BST +8 to +9 time zones.

Melasia consists of 5 major islands forming the subconstinent of Melasia within Melasia and Mavronesia, as well as up to 350 small and volcanic islands in the Caroline sea, Manatan sea, Sea of Saba, Sea of Pulau, Reef sea and Ludwig sea. The Melasian subcontinent is a result of past volcanic activity on the Melasian tectonic plate, while the smaller Caroline islands archipelago is situated on the border between the Melasian, Equatorian and Notosian tectonic plates and is one of the most volcanically and seismically active regions in the world. The seismological activity leads to frequent earthquakes, tsunamis and volcanic erruptions, especially in the Caroline sea. This area is considered one of the most dangerous ones in the world. The territory of the country is located close to the equator and is relatively flat, which makes it exposed to monsoons. Almost all of the northern territory of the country is covered by rainforests and is located within the subtropical rainforest climate region, while the southern islands of the Melasian chain, including the southern portion of König Georg island, New Jusland island and the König Ludwig island experience more arid climate and even some small deserts can be found within the islands.

It is confirmed that various tribes have crossed the strait between Pamira and Melasia as early as 2200 BCE. The first documented civilizations date from the 18000 BCE. As suggested by its geographical location, the islands of modern-day Melasia played a vital role in ancient and medieval naval trade between the east and the west. Melasian tribes were known as excellent sailors, and evidences of their expeditions can be found around the Melasian and even Mavronesian archipelago and as far as southern Pamira and the Caroline islands. During the Middle ages the area was heavily influenced by various Pamiran nations like Kenlong. Until the 19th century the area was never unified under one flag, with parts of the islands in strategic locations being owned by more powerful Pamiran empires, with the rest of modern-day Melasia being divided among various feudals, tribal alliances and isolated communities.

The islands were first discovered by Bereans in the 17th century. The first colonial empire to aquire full control over the territory of modern-day Melasia was Mascylla in 1804. After a series of conflicts between the Berean colonizers and the local warlords, the Crown Colony of Mascyllary Melasia was formed in 1823. Melasia as a concept arose after the Great war (Aurorum), when the area experienced a rise of national identity among its native peoples. Due to rising internal tensions, the colony was given increased autonomy from its metropole following a number of reforms between 1905-1912, and declared independence in 1913, however, remained highly dependent on its former metropole. In 1930s', Melasian leaders attempting to gain complete independence from Mascylla and to perform independent international politics, creating stronger ties with Cuthland-Waldrich in Berea. This resulted in the Melasian Crisis and armed conflicts in both Berea and in Melasia. The country managed to gain autotnomy from Mascylla as a result of the war, an authoritarian regime was established for the next several decades. Following a severe economical crisis and unsuccessful political reforms in the late 1960s, the country experienced a revolution in 1967, when its government was disbanded and the presidend Salemon Linberg was imprisoned. Melasia constructed a stable liberal democratic political system over the course of forty years, slowly rebuilding its economy. Today Melasia is a federation consisting of 6 states and 4 autonomous territories, including the disputed Walter island chain in the Sea of Saba.

The economy of Melasia is one of the largest in Pamira and the largest on the continent of Melasia and Mavronesia. It is ranked nth by nominal GDP per capita. Melasia is in top positions in quality of life, human development and income per capita. The country is widely renowned for its freedom of speech, high democracy index, and protection of human rights. Jürgenshafen, the country's capital, is the fifth city in the global livability survey. Melasia has a modern service-based economy. Its primary exports include consumer electronics, IT software and hardware, automobiles, heavy industrial machinery, and natural resources, most notably rubber, with other important resources being petroleum, palm oil, lignite and polymetal ore. The country is a major tourist destination, and tourism is a major part of its current economy. Melasia is a member of the Assembly of Nations, !CPIS and the Mavronesian Council for Economic Development.

The etymology of the name Melasia has two possible origins. According to Mascyllary linguists of the twentieth century, the name most probably was derived from the Erytheric words μέλος (melos), meaning melody, and νῆσος (nesos), meaning islands, to form the name "the island of melodies", probably due to the songs of the native tribes.

According to another theory, the ancient name of one of the islands was derived from the Malayam word മുല്ലപ്പൂ (mullappu), meaning jasmine, which slowly evolved into melati. When the Lhedwinic colonists arrived to the islands in the 19th century they would eventually use the word melati as name for the native tribes. By adding the Greek word νῆσος (nesos), meaning island, they formed the name Melasia, "islands of the Melati".

Independence and the Cold war 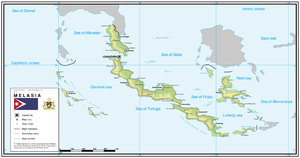 Retrieved from "https://iiwiki.us/mediawiki/index.php?title=Melasia&oldid=278684"
Categories:
Hidden categories:
This page was last edited on 23 November 2020, at 04:04.
Privacy policy
About IIWiki
Disclaimers