The Santiago Anti-Communist Treaty Organisation (SACTO; Spanish: Organizacion del Tratado Anticomunista de Santiago) is an intergovernmental organisation and military alliance aimed at combating and eradicating the forces of communism and other forms of Marxism. SACTO is the successor organisation to the now defunct Axis Alliance, which came into existence with the Cebu Cooperation Pact in March 2014. SACTO is a continuation of the Axis Alliance's second iteration, which was formed in July 2014 with the Santiago Cooperation Pact. It was eventually renamed and reorganised into its present form on 15 October 2014. SACTO's headquarters are located in Santiago, Gran Cuscatlan.

Politically, SACTO is often identified as right-wing. Its membership, as of 30 October 2018, consists of 30 member states of varying government types, ranging from centrist, democratic liberals to authoritarian absolute monarchies and military juntas. Despite this broad spectrum of governments, the majority of SACTO members are considered realist with regard to international relations, in stark contrast to member states of the International Freedom Coalition (IFC), who generally express a liberal outlook. All SACTO members are united in their crusade against communism and other rogue elements throughout the international system.

SACTO was one of three dominant international alliances, alongside the IFC and the United Left. It initially found itself as being adversaries with the latter, engaging in various conflicts with each other. Following the weakening and eventual dissolution of the United Left from 2014 onwards, SACTO then mainly focused its efforts in rivalling the IFC, while at the same time having countries that had duel membership of both alliance. Following a period of détente between the IFC and SACTO and the general weakening of the former due to infighting and leadership struggles, in 2016 the organisation began turning their attention towards evolving asymmetrical threats internationally. With the IFC being essentially defunct from 2019, SACTO is the only one of the 'Big Three' alliances left. Members of SACTO generally reject the authority of the World Assembly.

Emblem of the original Axis Alliance.

The precursor organisation to SACTO was the Axis Alliance, which was established by the Cebu Cooperation Pact. It was formed officially on 16 March 2014. It consisted of five core founding members; Asigna, Whiteshore, Huda, Dewhurst-Narculist and Gran Cuscatlan, and expanded when Aravea and Aeyariss joined the Axis. It went into hiatus from 29 May as a result of internal problems that led to the temporary dissolution of the Axis Alliance. Several successor organisations were founded in an attempt to replace the Axis; Central Powers, the Pacific Economic Defense Coalition, the Order of Axis, the International Capitalist Coalition and the Union of Armed States.

Besides the Axis Alliance, other major international organisations were the United Left (UL), a broad alliance of left-leaning countries ranging from communists to social democrats, and the International Freedom Coalition (IFC), made up of various republican and democratic countries. While these successors to the original Axis shied away from confrontation with the IFC, they continued the rivalry that had been present between the Axis Alliance and United Left. This culminated in the June Crisis, where tensions between the remnants of the Axis Alliance and the UL peaked and a global war appeared inevitable. This period of tension eventually subsided with the signing of the Saint Claire Compact and foundation of the Confluence of Six.

The successor alliances to the Axis were short-lived. The nations of Aeyariss, Dewhurst-Narculis and Gran Cuscatlan eventually forged a new core of Axis members and moved the new Axis Alliance headquarters to Santiago, Gran Cuscatlan, absorbing most of the organisations that had split to refound the Axis Alliance, this time with the Santiago Cooperation Pact.

In August 2014, the founding member Asigna was suspended over allegations of power abuse, and misdirection of the Axis members. Asigna opted to leave the Axis Alliance, severely disrupting its cohesiveness. In order to transform the Axis in light of Asigna's suspension and eventual removal, a new core consisting of Gran Cuscatlan, Aeyariss, Inyursta, and Dewhurst-Narculis rebranded the Axis Alliance into its present form; the Santiago Anti-Communist Treaty Organisation (SACTO). SACTO immediately found itself as one of three primary international alliances, alongside the IFC and the United Left.

Meanwhile, the UL was crippled by infighting and it was eventually dissolved in July 2015. It was replaced by the United Socialist Nations (USN), which was dissolved in 2016. Since then, there have been no major left-wing alliances that have challenged the power of SACTO.

Almost immediately after its foundation, the relationship between SACTO and the IFC began to rapidly break down. Tensions would peak through October and November 2014, before subsiding.

The greatest loss inflicted by SACTO forces on an IFC member state was the Spring Sea Massacre, where an entire Roman fleet was sunk.

There was a degree of limited cooperation between the IFC and SACTO through 2015 and 2016. In the meantime, SACTO battled with various left-wing countries. Some members of SACTO even hold dual membership with the IFC. Following infighting and the departure of key members, the power of the IFC has waned considerably and is now mostly inactive.

Tensions between the IFC-leaning country of Brytene and the SACTO members Gran Cuscatlan, Nifon and Inyursta began to escalate sharply in April 2015 after an online spat between decorated Nifonese General Fujikawa Jin and Brytisc noble Aoife Brighteye. In an attempt to settle the deal as a matter of honour, a dual between the two was organised and held in Shimazu, Yamakusa Prefecture in Nifon. The duel was widely publicised and livestreamed throughout the world. After a gruelling battle, Brighteye managed to fatally wound Fujikawa, killing him. While Fujikawa was martyred and became a folk hero in Nifon and other countries, the affair permanently damaged diplomatic relations between Brytene and SACTO, and set off a chain of events that almost led to an escalation of war between the two sides. Later that month an Inyurstan whistleblower published confidential documents online that implicated a number of national politicians with accusations of corruption and harbouring left-wing sympathies. The Brytisc government offered political asylum to those implicated in the leak after communist revolutionary Alberto Cassias de la Plata was killed by the Cuscatlani paramilitary organisation Commando Sombre. Lanson Sãorules, a Senator mentioned in the documents, accepted and fled to Brytene with Rando Sourez, his aide. After being interrogated by the Brytisc military, Sãorules was killed and Sourez was shot by Brytisc military personnel. The Brytisc government claimed that Sourez had killed Sãorules on behalf of Inyurstan President Jack Peresque, while the Inyurstans claimed that Brytene had murdered both men in cold blood. 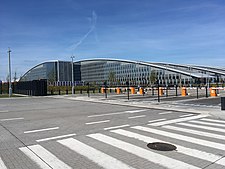 As the IFC declined, SACTO found itself as the only remaining geopolitical bloc with a significant degree of power and influence. Starting in 2016, it found itself dealing with more asymmetrical threats internationally. Nifon also began to play a major role in the organisation and the Southern Furukuran Sea has become an area of particular interest.

After the destruction of the Nifon-based Sodom Front, its successor, Homofront, began an international terror campaign against SACTO and other countries with illiberal attitudes towards the normalisation of homosexuality. In May 2016, in retaliation for these attacks, the Commoner terrorist organisation known as the Crown Royal Guard attacked various locations in the city-state of Kesslerstaadt; a global hub of sex tourism, killing 270 people and wounding 610 others. The structural integrity of the kilometre tall Babeel Tower was also compromised and was subsequently demolished.

In 2017, Carloso; once a member of the IFC and generally considered hostile to SACTO, was admitted to the organisation on the recommendation of Nifon, having gone through a period of reconciliation. This coincided with a change in President Cárlos Tobón's foreign and domestic policy, favouring close co-operation with right-wing, mainly authoritarian countries over liberal democracies, to combat globalist forces and growing asymmetrical threats worldwide. Shortly before joining, Shogun Maki Kojiro made a state visit to Carloso, a first for a Nifonese leader. In late 2018 Kirishinan Dirigeant Arata Kasuga also visited Carloso for talks with President Tobón.

SACTO forces were involved either directly or indirectly in international incidents in South Oceanica and Bangka. 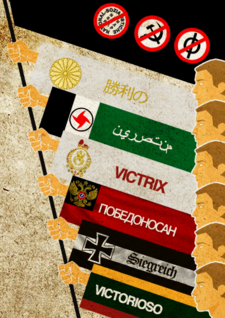 SACTO propaganda poster, featuring the word 'victory' in various languages alongside the flags of member states.