The Senate of Latium is the unicameral legislature of Latium. It has existed since the days of the ancient Latin kingdom. It remains one of the longest standing and oldest institutions in the Latin government.

The composition and powers of the Senate are found in the various constitutional documents of Latium, including the mythical founding documents of the city of Castellum. The most prominent governing document is the Senate Edict, as part of the Theophylactian Reforms. The Senate is comprised of 794 senators, elected by national list. Senators meet in the Senate House, in Castellum sometimes known as Curia Claudia or Curia Anicia. Though subordinate to the Monarch in his capacity as Princeps Senatus, the Consul is the leader of the chamber, serving as it's presiding officer and speaker.

The Senate has existed since the founding of the city of Castellum in the form of a council of nobles to guide the city's governance. It is the longest lasting and most enduring tradition of the Latin peoples. It continued to remain politically weak until mid-11th century and the ensuing instability that followed out of the devastating defeat of the Latin Imperial forces at the Battle of Saint-Nazaire. In this era, the senate constituted many of the newly landed nobles and lords who now dictated many Royal edicts and laws. The Senate lost a great deal of power during the reign of Maria Augusta, whom they attempted to overthrow at one point, forcefully removed many senators and relocated the body to Alexandria, which had been the seat of the Crown for the prior 70 years in order to keep a watchful eye on the body.

The Senate changed a great deal in its composition, powers and abilities throughout its existence. Before the reforms of Theophylactus I Augustus and the Consulship of Thomas Anicius, Duke of Beroea, an estimated 95% of its seats were hereditary or appointed, with the remaining seats often held by members of the clergy. At this time, the key leadership position, were held for no longer than a calendar year. For example, in this period the Emperor would appoint two Consuls to preside over the Senate. The same was true for Senatorial Tribunes, though these were often elected from within.

Following the reforms in 1866, modern political factions or parties began to form around prominent members; the conservative Optimates around Thomas Anicius, Duke of Beroea; and the liberal Populares around Peter Lucretius, Count of Olisipo. Here, the Senate shifted towards a more modern legislature and a more representative body. It wasn't until after the Social War that all appointed and hereditary seats were abolished and every seat became popularly elected. However, many clergy members, nobles and peers were able to sit in the Senate as life senators until 1967, and even as late as 1999 as "law lords".

At the conclusion of the Social War, Empress Diana Augusta, directed the Senate, specifically the Senatorial Reform Act. This act was focused on reducing the Senate from its bloated membership of 930 to 794. The Monarch retains the ability to create new senators, whether by calling for the addition of new seats, or the expansion or abolition of existing seats.

Since 1952, all 794 Members of the Senate were popularly elected; however, the Curiate Assembly consisted of 25 appointed members. While the Curiate was then part of the Senate, prior to the 1999 reform, all its members were appointed and served as one of the highest courts in the Latium. The 1999 reforms abolished these non-senatorial appointments with the creation of the Supreme Court, and abolished the Curiate Assembly, with some members earning appointment to the new Supreme Court

By law and constitutional convention, the Senate controls it's own membership, and may expel members. A person may not sit in the Senate if he or she is the subject of a bankruptcy proceedings, or if he or she is bankrupt. Individuals deemed unfit under the Mental Fitness and Stability Act for ten months or more must vacate their seat. Under the same Act, three specialists must report to the Consul that a Senator is suffering from mental illness before a seat can be declared vacant.

Anyone found guilty of high treason may not sit in Senate until he or she has received a full pardon from the Monarch. Moreover, individuals serving a prison sentence of one year or more are ineligible. Those found guilty of certain election-related offenses, under the Acts of Constitutional Reform, are permanently barred from holding public office, unless they attain special dispensation by the Monarch. Several other disqualifications are codified in the same Act: holders of high judicial offices, civil servants, members of the regular armed forces, and members of foreign legislatures. Magistrates, even though they are paid officers of the Crown, are not disqualified. Senators may continue to serve in the senate while holding separate legislative positions, such as a dual mandate in city, county, or devolved assemblies.

Senators represent the entire population of Latium under the theory of virtual representation. Senators are nominated by political parties, though independent candidates may be elected if they receive enough votes or create an electoral alliance. Political parties, or alliances, submit pre-election party lists to the Imperial Electoral Commission by the deadline. Parties are not required to disclose their party lists, but many parties publicize their lists. 719 are allocated to parties that have received at least 5% of votes along a semi-proportional allocation, with remaining 75 seats allocated to the majority party or party holding a plurality of seats to ensure a majority.

Though there are no single-member districts, an independent Boundary Commission has existed since the 1860s. The Commission consists of 14 individuals appointed by the Monarch and the Master of Offices as an ex offico member. It conducts reviews of electoral boundaries once every 15 years, with random interim reviews. This commission often recommends to the Monarch on any possible expansion or reduction of senate seats. These proposals are subject to Imperial assent, and in certain instances may be amended. Since 2015, the Boundary Commissions has since been absorbed into the Electoral Commission, which was established in 2001. The number of constituencies has been fixed at 794 since 1956.

Anyone under the age of 18, prisoners, and insane persons are not qualified to become Senators. To vote, one must be a citizen of Latium, a Belisarian or Belfrasian, or Fakolanan citizen residing in Latium for at least 5 years, or currently live in an overseas territory. Latin citizens living abroad are allowed to vote for 15 years after moving from Latium. No person may vote in more than one county.

Once elected, Senators continue to serve until the next dissolution of the Senate. If a Senator dies or ceases to be qualified, his or her seat falls vacant. It is also possible for the Senate to expel members, but this power is exercised only in cases of serious misconduct or criminal activity. In each case, a vacancy may be filled by a member of the same political party from the previous election's party list, if the vacancy happens more than 3 years before the next election. If a seat falls vacant less than 3 years before the next election, the seat remains vacant until the election.

The designation as a Senator applies to all elected members with the style of "The Most Renowned". The annual salary of each Senator is currently $170,000. Senators may also receive additional salaries in right of other offices they hold (for instance, the Magisterial offices or the Consulship). Most Senators also claim for various office expenses (staff costs, postage, travel, etc.) and, in the case of non-Castellum members, for the costs of maintaining a home in the capital.

Senators also receive retirement benefits that are similar to other government employees if they serve for more than one full term. These benefits vest after 10 years of service. Senators also receive state privileges similar to that of privilege of peerage, which includes protection against civil or criminal liability for actions done or statements made in the course of their legislative duties – except for in instances of treason.

The consul is the oldest office in the Senate and the Latin government. The Consul is the most prominent elected legislator, and second legislator only to the Monarch by virtue of the latter's role as Princeps Senatus. Today, the consul acts as the leader of the Senate, and is the individual most likely to command the confidence of the Monarch; by convention this often means the leader of the largest party in the Senate. Differing from similar governmental systems using a prime minister, the consul does not exercise any executive power. Also unlike other parliamentary systems, the consul simultaneously serves as the presiding officer, or speaker, of the Senate, where he or she will supervise the conduct of its business. This role provides a consul the ability to directly control what does and doesn't reach the floor for reading, debate, and vote.

The consul is primarily responsible to the Monarch, who holds the power to appoint or dismiss at his or her sole discretion. However, a consul must also maintain the faith of a majority of the Senate, or his or her senatorial party. A consul may be removed by the Senate by ordinary expulsion rules. Most often, the consul is the majority leader of the senate as the leader of the largest party. If a consul is not a member of a political party or not the leader of the largest political faction, a separate majority leader is appointed by the senatorial party.

Whenever the office of consul falls vacant, the Monarch appoints the person who is most likely to command the support of the Senate as it's presiding officer, normally the leader of the largest party in the Senate. A consul may resign even if he or she is not defeated in election (for example, for personal health reasons); in such a case, the Monarch appoints a replacement.

Political parties often appoint deputy minority leaders, and their own frontbench to serve as a shadow cabinet. These front bench teams are often divided similarly to magisterial offices with members referred to as Spokesperson (ie; Spokesperson for Foreign Affairs). Though this is not a constitutional role, spokespersons of minority teams are often high ranking within the senatorial party.

The Senate uses committees and their subcommittees for a variety of purposes, including the review of bills and their amendments. The appointment of committee members is formally made by the whole Senate, but the choice of members is actually made by the political parties. Generally, each party honors the preferences of individual members, giving priority on the basis of seniority. Historically, membership on committees has been in rough proportion to the party's strength in the Senate as a whole, with two exceptions: on the Rules Committee, the majority party fills nine of the thirteen seats; and on the Ethics Committee, each party has an equal number of seats. However, when party control in the Senate is closely divided, extra seats on committees are sometimes allocated to the majority party. 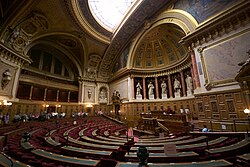 By the the Acts of Constitutional Reform and constitutional convention, the Senate has authority over financial and budgetary policy through the enumerated power to lay and collect taxes, duties, imposts and excises, and to pay the debts. Convention also allowed for the Senate to have the ability to call for an income tax to be levied. The Senate can establish post offices and post roads, issue patents and copyrights, fix standards of weights and measures, establish Courts inferior to the Supreme Court, and "make all laws which shall be necessary and proper for carrying into execution the foregoing powers.

Retrieved from "https://iiwiki.us/mediawiki/index.php?title=Senate_of_Latium&oldid=59195"
Categories:
Hidden category:
This page was last edited on 16 April 2019, at 19:29.
Privacy policy
About IIWiki
Disclaimers