The Synarchist Union (SU; Carlosian: Unión Sinarquista) is a synarchist, neo-fascist political party in Carloso. It was formed on 14 August 1974 as a successor organisation to the defunct Synarchist Front, a minor organisation that existed from 1939 to 1947, falling apart after the outbreak of the Emergency War with the idealogically similiar Synarchist Bourgougia. The Synarchist Union's first Secretary-General was Sebastián Nores, a retired Army general. While initially failing to achieve electoral success, in 1980 it entered the National Assembly with two NAs, including Nores. Political violence against the party instigated by far-left and anarchist groups led to the murder and kidnapping of several party members, raising its profile considerably and allowing it to make further gains in 1985. After an explosion of anti-communist sentiment in Carloso after the Bourgougian Blitz, the Synarchist Union increased its number of seats considerably and began to consolidate its position as an anti-establishment opposition party. Nores unexpectedly died of a heart attack in 1998.

It achieved its best performance in the 2005 election when the party won 79 seats in the National Assembly. During the Corrective Revolution and run-up to the 2010 general election, the Synarchist Union had been predicted by political analysts and opinion polls to make huge gains at the expense of the increasingly unpopular Conservative Party, however the formation of National Salvation by Cárlos Tobón and other former Conservative NAs quickly sank these prospects, with the Synarchists recieving their worst election result since 1985. Despite subsequent losses in 2015, the Synarchist Union remains a mainstay of Carlosian politics. Its headquarters are located in Madrigal and, as of 2020, its Secretary-General is Damián Torrero.

Individuals and organisations opposed to the Synarchist Union have referred to it as a 'racist' and 'Nazi' party. It has been the target of extensive criminal activity by self-styled 'anti-racist' and 'anti-fascist' organisations, including the assault and murder of party members, stalking and theft. To date, all Secretary-Generals of the Synarchist Union have been the target of assassination plots, with Damián Torrero narrowly surviving an attempt on his life in 2014 by a far-left gunman. In 2017 Carlosian authorities uncovered a plot by the terrorist organisation known as Official Red Commando (ORC) involving a plan to bomb the National Convention of the Synarchist Union in Mostolt that year. The party describes itself as a 'post-fascist' organisation, committed to maintaining Carlosian democracy and the constitutional republic, while implementing a system of social co-operation (i.e synarchy) between the various social classes and economic groups within society for the betterment of the nation. It firmly opposes secularism and desires the transformation of Carloso into a 'republic guided by national Catholicism'. Officially, the Synarchist Union is also in favour of pan-Musgorocianism, though this lofty natured concept has not featured prominently in party communications for many years. 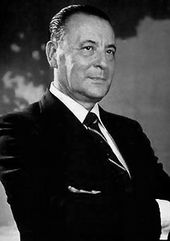 Sebastián Nores, founder and 1st Secretary-General of the Synarchist Union.

The Synarchist Union was founded at the Dearagon Hotel in Madrigal on 14 August 1974, consolidating at least ten different neo-fascist and ultranationalist organisations into one political party. Sebastián Nores was unanimously chosen as Secretary-General by the three hundred founding members after delivering a rousing speech to those present. The party was founded on the basis of Eight Principles, expressing the organisation's desire for a greatly expanded Carlosian state incorporating Acrary, Orticuria, Agostinia and parts of Licrasse and Bourgougia, as well a belief in the need for the eventual formation of a pan-Musgorocian superstate that would be able to challenge Nifonese dominace over the Southern Furukuran Sea, and lead a worldwide crusade against both capitalism and communism. In subsequent weeks, the party began publishing a fortnightly tabloid newspaper called Al Ilúninator (English: The Illuminator), circulating it in Madrigal, Valderosa and some smaller cities in Central Carloso. It was added to the Register of Political Parties of the National Assembly on 2 May 1975.

Putting forward over three hundred candidates in the 1975 general election, the Synarchist Union recieved 0.2% of the first preference vote nationally and didn't get any National Assemblymen elected. With a heavily funded campaign in the constituency of Chanes & Lena, Nores achieved the best result out of all candidates, recieving 19.3% of the vote and almost beating Conservative incumbent Joshua Mastache for the third seat. Most party members were satisied by the result overall, despite not getting anybody elected. The membership and public awareness of the party grew considerably during the campaign after a series of violent incidents between Synarchist Union activists and canvassers for the left-wing Communist Party and Socialist Republicans. Morale going into the 1977 provincial elections was high and, with much more opportunity to get candidates elected, the Synarchist Union entered provincial assemblies across Carloso for the first time, to the shock of establishment parties. At the end of counting, the Synarchists had secured 23 seats, with Nores himself being elected to the Madrigal Metropolitian Assembly.

The emergence of the Synarchist Union as a political force caused uproar in political circle, with even then President Matías Rasgado openly coming out to condemn Nores for supposedly expressing the same ideology that had gripped Bourgougia during the Emergency War. Nores shrugged off these attacks with ease. The party adopted a fanatically anti-communist line after a string of attacks by the left-wing terrorist organisation Red Commando, winning it additional support. Nores came out in public to express his support for Carloso to attack Bourgougia preemptively before it was strong enough to challenge Carloso in the future. He then accused the Communist Party of being the political wing of Red Commando, calling for the military to "round all the rojo bastards up and toss them into the Musgorocian Ocean". In the summer of 1980, five Synarchist Union members were kidnapped, killed and dismembered in Santaso, Fuerin Circuit by communist militants. This sparked outrage across Carloso, with President Rasgado being forced to crackdown on left-wing extremist groups in response. The perpetrators of these murders; Carina Prats and Vicente Saelices, were eventually caught, convicted and executed in 1983.

The 1980 general election was a major success for the Synarchist Union, seeing their first preference vote share more than quintuple to 1.1%. Nores won the third seat in Chanes & Lena, while party spokesperson Lucius Varela won a seat in Gelavega & Relbia. This major electoral breakthrough had wider implications for the SU. Fearing that they were going to steal support from the more nationalist and traditionalist wing of the Conservative Party, the Synarchist Union came under fierce attack by newly elected President Liam Moran. As tensions between Carloso and Bourgougia began to mount, however, it became apparent that anti-communism was becoming a more pressing issue for the Carlosian public and Moran muted his criticisms of the party. In the meantime, rioting and violent clashes between communist supporters and SU members became a regular occurance in cities across the country. In the 1983 district elections and 1984 circuit elections, its support in the generally poorer and fiercely traditional north-western provinces of Carloso became particularly apparent, with Conservatives being forced in several areas to go into coalition with Synarchists in order to form working majorities. At the same time, a minor split occurred within the party, with some criticising Nores for softening his rhetoric since being elected to the National Assembly. This group would go on to found Ordán Correcto, a paramilitary organisation which would conduct several minor bomb attacks and robberies during the 1980s.

Campaigning on a programme of aggressive remilitarisation against Bourgougia and a proposal to establish a 'senate of experts' as an upper house alongside the National Assembly, the Synarchists went from two to five seats at the 1985 general election, though their first preference vote share only increased by 0.2% to 1.3%. This was mostly down to the party running a more refined and well-funded electoral machine during the campaign; as the party had secured at least 1% of the vote in the last general election, it had qualified for a share of state funding. Nores had also secured an elimination transfer pact with minor right-wing parties for them to direct voters to give their second, third etc. preferences to Synarchist Union candidates, giving them a greater chance of being elected. The party also campaigned to have the system of STV-ETO abolished in favour of a closed list form of proportional representation, being of the opinion that it would favour smaller parties at the expense of larger ones and force them to enact Synarchist policies should the SU go into coalition in the future.

When the Bourgougian-backed Red Commando assassinated President Moran on 17 March 1987, followed by the invasion of Victory by the Bourgougian Republican Army, Nores called for all members of the Synarchist Union to enlist in the Carlosian Armed Forces and fight in "the Great Crusade to rid Musgorocia of the red virus". The SU already had a certain amount of sympathisers within the Armed Forces, and it would be the political leanings of many of these officers and enlisted personnel that would come to influence the political development of individuals such as future President Cárlos Tobón and other figures of the Corrective Revolution. 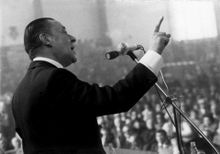 Nores addresses a public gathering at Estregal Circuit University in 1988.

The Synarchist Union supported President Tobón's decision in 2011 to hold a referendum on withdrawing from the World Assembly, and endorsed a Yes vote. The referendum passed and Carloso withdrew from the WA at the end the year.

The party is a member of the Congress of Synarchist Movements. 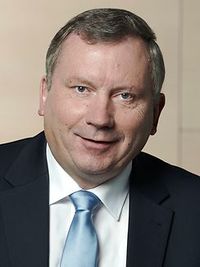 Retrieved from "https://iiwiki.us/mediawiki/index.php?title=Synarchist_Union_(Carloso)&oldid=194759"
Categories:
Hidden categories:
This page was last edited on 22 April 2020, at 13:38.
Privacy policy
About IIWiki
Disclaimers