The Assembly of Nations (AN or sometimes AoN or AON) is an intergovernmental organization established to provide and maintain international peace and security, developing close relations among member states, achieving widespread international co-operation, and being a forum for the diplomatic interaction between nations as defined by its Charter instrument. It was founded after the Great War during the Treaty of Lehpold in March 1917, with its aim of preventing any future wars on the scale of the Great War, and evolved into an organization dealing with maintaining international peace and security, protecting human rights, providing humanitarian aid, promoting sustainable development, and upholding international law. Its headquarters, with all AN territories as subjects to a status of extraterritoriality, is located in Köpenick, Königsreh, and it has other main offices in Lilienburg City, X.

The organization is divided into six principal organs: the AN Security Council (ANSC) as the executive organ tasked with enforcing AN Resolutions and intiating peacekeeping missions, the AN International Council (ANIC) of the organization's member states as its deliberative assembly organ, the AN Mandateship Council (ANMC) for administrating AN Mandates, the AN Secretariat (ANSE) with the head administrative office of AN Secretary-General, the judicial International Courts of Justice, and the AN General Socio-Economic Council (ANGSEC) for interregional economic and socio-demographic matters.

The AN is the largest, most familiar, most internationally represented and most powerful intergovernmental organization in the world. Its specialised agencies include the UPESCH, ICHEF, the International Bank, the International Health Committee, and the International Food Programme. At its founding in 1917, the AN had 13 member states. As of 2020, there are now 23, all mutually recognized sovereign countries.

Aftermath of the Great War

Role in the Melasian Crisis 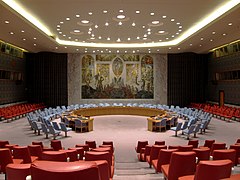 The Security Council of the Assembly of Nations is primarly tasked with upholding, preserving and enforcing international peace and security by the means of issuing binding resolutions for all member states. Actions taken by the Security Council can include opening investigations and electing reccomendations to international disputes relevant to the broader global community, enacting economic and diplomatic sanctions and sending peacekeeping troops in the form of AN Missions as outright military action.

The permanent members of the Assembly of Nations Security Council are the six states which are given a permanent seat in the Security Council by the Treaty of Lehpold of March 1917 and further additional permissions by the AN Assembly throughout its history. These states are: the Fallish Federation, the Kingdom of Cuthland (formerly the Cuthish State), Federation of Central Pamiran Republics, the Kingdom of Lavaria, the Crowned Republic of Mascylla (formerly the Mascyllary Kingdom), and the Federation of Valimia. Falland, Lavaria, and Mascylla were the principal members and allies of the Armala Coalition in the Great War, as well as its victors. The other three were granted permanent seats as part of the 1943 Habernau General Conference diplomatically negotiating the political outcomes of the Melasian Crisis. All of the members are considered to be the world's great powers, with the notable exception of Falland; the G3 Initiative between Sarrac, Yudong and X support each other's claim of having permanent access to the Security Council as a broader organizational reform proposal.

Decisions are made upon the plurality vote of the six members, in which for a binding decision two-thirds must approve; a power of veto does not exist. The Security Council is added by seven non-permanent member states rotating every two years from all member states of the AN Assembly. While they have no initiative in proposing or recommending specific ANSC action, they have the possibility to vote in ANSC decisions with a vote half as significant as those of the permanent members. The uneven number of the ANSC members theoretically allows for every decision to pass without a draw.

The assembly and main hall of the International Council

The chamber of the AN Mandateship Council in 2020

The Mandateship Council of the Assembly of Nations was tasked to administrate and govern designated AN Mandates in accordance to the maintenance or fostering of the inhabitants' living conditions on their behalf or in interest of international security and peace, ultimately intended to prepare the mandated territories for attained self-rule by the merger with another neighbouring sovereign state, or independence. Historically most AN Mandates have been former colonies and dependant territories of the defeated Central Alliance after the Great War which were transferred to a Mandatory power, the two principle being Mascylla and Lavaria, undertaking obligations to the protection and development of the attained territories which were then regarded as too underdeveloped or politically instable to receive sovereignty. All AN Mandates have either received independence or were annexed by sovereign states, and with the establishment of X as a member state of the AN in 19XX the Mandateship Council has largely remained inactive since.