David J. Roth, J.D. (born May 6th, 1988) is the current mayor of Yerushalayim and the former City Councilman of District 14 on the Yerushalayim City Council. He is the youngest son of the Roth family, owners of the largest corporation in Yisrael, as well as a member of the Royalist Conservative Party. He is a graduate of the private liberal arts King Solomon University and its well-regarded law school, King Solomon University School of Law.

Roth is the only member of the influential and powerful Roths to run and hold elective office. He is the youngest of 7 siblings. He is viewed by many as an able orator and as a rising star in Yisraeli politics. He is a practicing Orthodox Jew who is married with three children.

David Roth was born on May 6th, 1988, in the Elazar F. Roth Memorial Hospital (named after his father and the family's patriarch) in downtown Ashkelon. He was raised on the expansive and secluded family estate in Tel Eilat, the Westerly Islands, a picturesque subtropical retreat for the country's financial and political elites.

He proved to be a deft athlete, much to his father Elazar's delight. He played tennis, squash, badminton, and later golf in his yeshiva high school years at the wealthy Tel Eilat Yeshiva and squash and golf in college at the King Solomon University. He also was a good and astute student, earning top grades in courses such as civics, social studies, history, and English. He dated Rochel Goldwater, the daughter of rival businessman Dovid Goldwater at KSU but they later broke off their relationship, causing a brief divide between the Roths and Goldwaters in the gossip-filled social circles of the so-called "Westerly Elite."

Unlike his older brothers, David took an instant liking to politics. He decided in his early college years to pursue the traditional path of politics in Yisrael, earning a law degree and practicing law before running for office.

Controversially, David took a leave of absence in his last semester to run for Yerushalayim City Council in spring 2012. Conflicting reports suggest Michael Roth, Tom's oldest brother and the family patriarch, intervened to pressure the Law School to grant his youngest brother a leave of absence. After David won the Conservative primary in May 2012, he was granted his J.D. despite missing a mandated capstone seminar, which the Law School's Dean, to much outrage, unilaterally waived without addressing the matter to the appropriate faculty committee. Critics are quick to point out the allegedly 'corrupt' conduct, producing public records showing the Roth family is major contributor to both the University and its Law School. 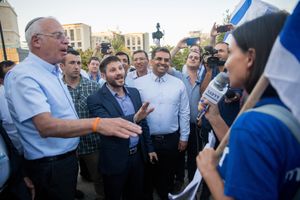 David Roth talking with voters in Kings Hill in March 2012.

Because of his family's wealth and power, Roth's public persona has a decidedly reformist and populist edge to it. He campaigned on, and is widely believed, to take anticorruption efforts seriously, which has boosted confidence in the Holy City's government.

He is known to prefer more casual, if stylish, clothing. In his public appearances, he often forgoes a suit and tie for open-neck dress shirt and slacks. This "new casualness" has inspired a more relaxed look among a segment of the younger professional class in the capital city.

Roth is considered on the right-wing of the Royalist Conservatives. He is extremely conservative, especially on social issues, which largely reflects the religious center of gravity in the city. He has a mixed record on economic issues: he often follows the free-market line, but has selectively promoted government involvement in the economy, such as increasing public subsidies to yeshiva students or launch populist-themed crackdowns on business regulatory abuses.

Roth has commented on some social isolation from most of his siblings, who share a moderate age gap with him and his twin sister Avie, the youngest Roths. He remarked to the press during his first campaign for City Council that "I always felt...like a twin [to his twin sister Avie] and not like one of 7...most of my siblings are much older than me and feel like uncles and cousins, to be honest."

Retrieved from "https://iiwiki.us/mediawiki/index.php?title=David_Roth&oldid=2293"
Categories:
Hidden category:
This page was last edited on 11 January 2019, at 02:54.
Privacy policy
About IIWiki
Disclaimers