The Hezekian Reaction (2020 - present), officially known as the Royalist Counterrevolution, by many of its supporters as the Glorious Restoration, and by its critics as the so-called Reactionary regime, refers to the reign of King Hezekiah III of Yisrael. His father, Yaakov II, was known as the "Quiet Monarch" and rarely involved himself in political and constitutional duties, to the effect that the President of Yisrael stepped in to fulfill some of the roles as a de facto co-head of state. Upon taking the throne, Hezekiah instituted a startling and unprecedented reclamation - accused by his opposition as an unlawful expansion - of royal powers and perogatives, some of which had been unused for over a century since the end of the absolute monarchy in the 1919 Revolution. The new King also declared the limits on royal powers passed in the 1952 Royal Reform Acts to be unconstitutional and null and void, precipitating a constitutional crisis.

Implicit endorsement of Conservatives in the 2020 presidential election

During the first day of his reign, as part of his televised remarks to the nation, King Hezekiah urged Yisraelis to "vote for the political party whose very name shows it supports the restoration of a properly empowered and dignified monarchy [...] [t]here is only one presidential candidate and one party which stands unilaterally with me and the Holy Throne. Do your duty and give me national leaders who will restore our blessed Kingdom to heights yet to be seen..."

This was understood by everyone to be referring to Yitzchok Katz and the Royalist Conservative Party in the upcoming 2020 elections, only five days away at that point. After his speech, Katz's opposing presidential contenders, Reuven Goldschmidt of the United Center Bloc and Yosef Kaduri of the Left Bloc, vigorous decried the "royal meddling" and demanded the King retract his "blatant" endorsement. King Hezekiah said nothing more on the matter before Election Day, ignoring their protests.

In his televised remarks on January 22, 2020, King Hezekiah III declared a "Royalist Counterrevolution," saying that:

"It is my utmost and solemn duty to assume this throne [...] to lead Klal Yisrael [People of Yisrael] in this new time of crisis and division. May Our Lord Hashem, the Creator of All and the One Above, bless our nation with peace and prosperity during my reign and give us the strength to endure these nisyonos [challenges] and emerge even stronger in our performance of the mitzvos [commandments]. May He permit us to merit the power and resources to build a holier and more moral society within and lead by example to a more just and righteous political order among our gentile neighbors in the world beyond.

But to earn this merit and renewed righteous mandate From Above...we must correct the injustice and errors of the past. My father, may his name be of righteous memory, was a man of his time. He was raised when the wicked forces of creeping secularism and liberalism nearly ended our Kingdom and systematically sidelined and degraded the value of the monarchy in the eyes of our people. Thus, when my father took the throne, he withdrew from his divine role as our people's national representative and was disrespected by the arrogant and self-serving political elites and politicians of his time to slowly take rightful royal power and appropriate it for themselves.

No longer. I will restore my father's legacy and rebuild the merit of our people in the eyes of Heaven Above. The Royalist Counterrevolution begins now!"

Among the first items addressed in his speech, the monarch invoked his "extraordinary legal nullification" power to declare all parts of the 1952 Royal Reform Acts regarding limits on royal power to be nullified immediately. He accused the 1952 Acts of being a "so-called law [that] runs afoul of the very Constitution it claims to justify its legality" and that it was passed by "raw political power...by sneering secular, liberal politicians" who wished to sideline the Monarchy of Yisrael. He concluded his on-air voiding of parts of that law with his "expect[ation]" that Knesset would repeal them when it reconvened (which it did a little more than a month later). 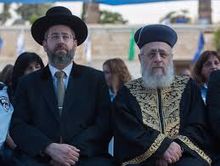 His Majesty (right) and The Prince Michoel (left).

Towards the end of his inaugural televised speech, Hezekiah III announced the appointment of his middle brother, the Prince Michoel, to the century-long vacant role of King's Minister, a constitutional role meant to represent the the Crown's interests and opinions on the Presidential Cabinet but due to early conflicts between the first Prime Minister and King after the 1920 Constitution, went unfilled and was gradually forgotten about.

In the first few months of the Counterrevolution policy, many supporters and critics of the new royal order alike perceived the King's Minister to be a more powerful decision-maker than even President Yitzchok Katz - perceptions that irritated the incumbent president and his allies. However, with the Onekawan Affair and intense publicity over possible royal involvement in the October 2020 disappearances, the President's popularity soared and Prince Michoel was viewed as an influential power-broker in the Cabinet, but subordinate to the President.

Fears of an Anti-Royalist purge

In the days, weeks, and months after his enthronement, King Hezekiah's new royal order sparked an intense backlash by the the Yisraeli left, whether in the media, among Con-Lib politicians and grassroots activists, or in the arts, business, or higher education. This fear of an authoritarian and ultra-religious crackdown on Yisraeli society has continued to persist and remains fevered among its believers, though as of February 2021 no such action has occurred.

One of the drivers of the deep-seated fear among left-wing and Chiloni Yisraelis of an impending illiberal regime was the appointment of Prince Yehuda as the new head of the YeMep. The youngest royal brother has dabbled in controversy and far right politics in the years preceding his brother's ascension as king. In the months before and after his appointment, however, the prince has kept a low public profile, though anti-Crown critics believe, often without evidence, that he will unleash the YeMep on anti-royal dissidents at his older brother's command.

Some believers of this conspiracy theory feel vindicated with the rumors of YeMep agents operating on Gran Aligonia in 2020 at the height of Aligonian-Yisraeli tensions under Leuter Sion. Others point to what they argue was a failed start of an anti-royalist purge by the YeMep in October 2020 at the beginning of the Onekawan Affair with the October 2020 Crown critics disappearances.

Diplomatic tensions with the Talaharan Commune

Talahara-Yisrael relations, already fraying rapidly in the last months of the Feldman administration due to the hawkish Yisraeli posture and divergent backing of factions in the Gran Aligonian crisis between both countries, declined deeper with Hezekiah's ascension as king.

Media in the MU noted that with a new leftward-leaning cohort of younger leadership, most Talaharan decision-makers viewed the Royalist Counterrevolution as dangerously reactionary, warmongering (citing their perception of Yisraeli actions in the GA and in Enyama), and likely Invictist. The MU leadership likewise viewed newly-elected right-wing President Katz as part of the same clique as Hezekiah and his brothers. Consequently, Talahara took an increasingly hostile public tone towards Yisraeli actions and its new leadership.

The Government of Yisrael and many Yisraeli policymakers, in turn, viewed the MU rhetoric as unjustified and a sudden, extreme break from the norm, relying on decades of cordial relations to believe there was nothing legitimizing the radical change in tone from Talahara. Nonetheless, King Hezekiah III and his inner circle took a cold view to the MU rhetoric. Yisrael officially advocated for the removal of the Talaharan base in the GA, and Katz and figures close to the MU Union President Yolande-Minerve Saverne exchanged criticism during Katz's "war of words" with GA interim premier Leuter Sion in early 2020.

Relations remained very cold for most of 2020, with Talahara media or MU politicians using harsh rhetoric against Hezekiah, openly considering him illegitimate. This came to a head with the Onekawan Affair over seven weeks in October through December 2020, when the deployment of Onekawan troops to train in the Yisraeli desert along the Talahara-Yisrael border sparked concern of war in Talahara, and a geopolitical crisis erupted. After reciprocal trade embargoes and economic sanctions between both nations and a closed border, Latium brokered an agreement to de-escalate the situation.

While as of March 2021 there have not been any new tensions, most policy analysts in both countries view the new hostility as the "new norm" for the foreseeable future.