Sekidean Union is a miltiary and economic organization in Anteria that separetes itself into Inner and Outer Unions, which associates a total of 16 countries. It cooperates closely with Dokodo Union via the Kasian Council and with the Norterric Assembly via an association treaty. It was formed by a unionisation of Shanghou Pact and Purple Community into one union (although the two unions technically exist to this day and are politically frozen).

The Sekidean Union is consisting of a total of 16 countries, however, due to multiple federal agreements and past decisions, in the Sekidean Treaty System, there are total of 19 independent entities.

Split in the union

Following text includes obligatory rules to all SU countries as they were signed:

In 2002, text was amended with a second section considering rather functionality than purpose of the union: 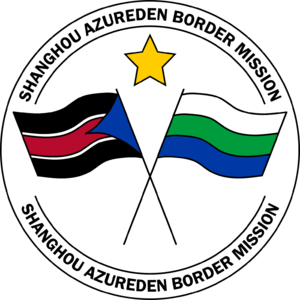 Emblem of the Azureden mission

Sekidean Cabinet of Leaders is a unofficial name for the regular breefings by leaders of all Sekidean Countries and activities, in which every country gets one vote and which leads to the maintenance of the Sekidean Union as a unified organization.

Sekidean Treaty court is the only Union institution, that has a jurisdiction over all Sekidean members, not just the Inner Union. Its role is to uphold and enforce the following of the Sekidean Charter by SU member countries and punish any violation of the treaty, be it by a fine or by a legal challenge. This organ is based in Palača Bogov, Torvon