Thanks to its geographic features of fertile plains and ore-rich mountains, the territory of Fyngaria has been inhabited since the prehistoric times. The first settlements were founded along the rivers of Ečé and Ogánig where a large percentage of Fyngarian population still lives. During the Ethlorek migrations around 400 BC, the first Fyngarian tribes came to the area, led by King Maharim I which formed the first Fyngarian state sponsored by the Merovian Empire which served as a buffer state between the Arlethic tribes and the Empire. With continuous influx of Ethlorekoz and simultaneous weakening of the Merovian Empire, the Fyngarian Kingdom continued to grow larger to encompass the current boundaries of Fyngaria. During the Middle Ages, the first unified Kingdom emerged in 921 under King Réjkárd I, who later helped convert Fyngarians to Christianity. In 14th century, neighbouring Noordenstaat, Nidwalden and Scanonia formed Nassau Union and occupied southern provinces of Fyngarian kingdom, forcing the capital to move from Kijmáfórs to Ósaltéleis. In 1471 King Mérten II led a successful 10 Year War to reclaim the lost territories from the Nassau Union.

In 1921 Fyngarian communists revolted against the autocratic King, deposing it and turning the country into a socialist republic that existed until its dissolution in 1982 after the Fyngarian revolution.

After the revolution, the country went through a process of democratisation and economic and industrial reform, aided by its neighbouring countries. In 1991, Fyngaria, Noordenstaat, Nidwalden and Scanonia met in Kijmáfórs to sign a Treaty of Kijmáfórs forming the Lorecian Economic Area, laying foundations for the Lorecian Community, which was founded three years later in Bruningen, Noordenstaat.

Fyngaria lies in the west-central part of the continent of Lorecia. It is landlocked and surrounded on northern, eastern and southern side by mountain ranges. The average height from sea level drops towards west, where a large Noordo-Fyngarian basin is formed going all the way to the Putin Strait on the Noordenstaat coast. The highest peak is the Hírímlad at 2,120 meters and the lowest point is by the city of Szérészrókar at 25 meters. Most notable rivers are (Ót-)Elúszideg, (Ót-)Ecsé and (Ót-)Ogánig. The Ecsé and Ogánig flow into the Elúszideg, which further flows into the North Sea in Noordenstaat. Fyngaria is bordered by Albeinland to the north, Noordenstaat to the west and Scanonia and Nidwalden to the south.

Fyngaria has mainly continental climate, it has four pronounced seasons of near-equal length. Winter starts in mid-December and lasts until mid-March. Winters have average temperatures of −6 °C (21 °F) and are characterized by stable snow cover, bright sunshine, and short days. Severe spells of winter weather with cold winds, extreme temperatures of around −30 °C (−22 °F) and heavy snowfalls are common. Summer starts in June and lasts until August. Summers are usually warm and sunny, with cool evenings and nights. Summers have average temperatures of around 19 °C (66 °F), with extremes of 35 °C (95 °F). Spring and autumn bring fairly mild weather.

Fyngaria is a federal, parliamentary, representative democratic republic. The political system is outlined in the 1968 constitution which reformed and democratised country after the June Revolution. The fundamental principles of the constitution are protection of human dignity, separation of powers, structure of the federation and the rule of law.

The Federal Chancellor, Réjkárd Kórsig, is head of the government and exercises executive powers together with his Cabinet. The legislative power is vested in the parliament consisting of the Federal Parliament which is elected through direct elections by proportional representation and the Federal Council which consists of representatives of the 11 federal states. 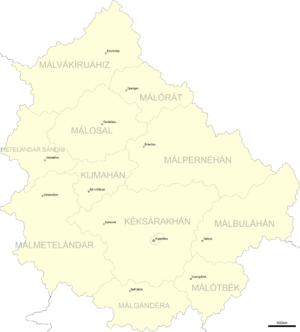 Federal states of Fyngaria and their capital cities.

Fyngaria is a federal republic divided into 10 states (málo) and a capital city Kijmáfórs as a special administrative district. The states are further divided into counties (málakáržen), which are further divided into municipalities (rulánarákem). The states enjoy a broad spectrum of jurisdiction vested to the state governments, such as strategic development, infrastructure, rescue services, taxes and most importantly, specific laws that have to be approved by the Federal Parliament.

Retrieved from "https://iiwiki.us/mediawiki/index.php?title=Fyngaria&oldid=257900"
Categories:
Hidden categories:
This page was last edited on 6 October 2020, at 21:06.
Privacy policy
About IIWiki
Disclaimers