The Kingdom of Aldia (Hesurian: Königreich Alden) was a sovereign state and Mascyllary kingdom centered around the historical state of Aldia and additional territories in northern and central Mascylla from its formal foundation in 1297 following the conclusion of Dilisme's War with the Peace of Westmarke to its re-organization into the democratic State of Aldia after the Mascyllary Revolution in 1924. It was the leading nation in the unification process of Mascylla in the War of the Five Kings and in the Mascyllary Kingdom until its dissolution in 1924.

The kingdom was created from the unified Duchy of Aldia and Grand Duchy of Fania after Grand Duke Joseph I of Fania crowned himself King of Fania and Aldia in 1297 following the Peace of Westmarke that drastically altered the Mascyllary political landscape. As a maritime and agricultural power, it grew to become one of the most influential Mascyllary states by the 15th century. After the gradual decline and partitions of Cuthland, Aldia was recognized as one of Berea's great powers and effectively pushed for an effort of Mascyllary unification, which was reisted by the Kingdom of Adwhin. In 1757 it became a decisive member state of the Elbgau Confederacy and oversaw its evolution to the Mascyllary Kingdom following the War of the Five Kings in 1789-93, with the King of Aldia ascending to the status of Mascyllary King. In 1923 however, the Mascyllary Revolution led to the initial expelling of the monarchy, but later re-institution as a constitutional monarchy which continued the line of solely Aldish monarchs ruling Mascylla. 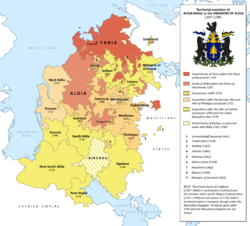 Territorial evolution of the Kingdom of Aldia since 1297

Retrieved from "https://iiwiki.us/mediawiki/index.php?title=Kingdom_of_Aldia&oldid=279838"
Categories:
Hidden categories:
This page was last edited on 26 November 2020, at 16:59.
Privacy policy
About IIWiki
Disclaimers