Dorothea I of Mascylla (full name Dorothea Elisabeth; born November 12 1989) is the first and current Queen of Mascylla. She ascended the throne on the death of her father, Lukas III, on 15 April 2015. She is the oldest child and only daughter of King Lukas III, deceased King of Mascylla, and Maria, Duchess of Wesburg-Maln. Her father died on 15 April 2015 after a series of strokes when Dorothea Elisabth was 25 years old. She became heir presumptive to her father in 1990, when a constitutional amendment allowed women to inherit the throne. Upon her father's death, she ascended to the throne and titles of her father despite her prone health issues associated with Chédiak-Higashi syndrome, giving her the famous whitened hair and lighter skin colour. She was coronated in St.Lorenz Cathedral in Königsreh on 23 May 2015.

A few weeks after she became Queen in 2015, the new 2015 Instrument of Government took effect, formally granting the person sitting the throne the previous roles in the legislative process Monarchs obtained throughout in Mascyllary history, and several other duties normally accorded to a head of state, such as formally proposing candidates for the office of the Prime Minister, signing off legislation, and being de jure commander-in-chief of the nation's military in wartime. The new instrument did not limit the king or queen to ceremonial functions, and among other things, to be regularly informed by affairs of state. As head of the House of Ahnern Dorothea Elisabeth has also been able to make a number of government-supported decisions about the titles and positions of its members.

The queen's heir apparent is Crown Prince Albert, the eldest child of the Queen and her husband, Wolfgang, Duke of Fahnicht. 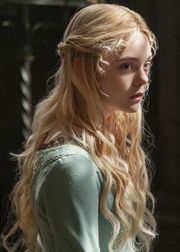 Dorothea was born at 7:20 (ECT) on 12 November 1989, during the late reign of her father, King Lukas III. Her mother, the Duchess of Welsburg-Maln was the youngest daughter of Karl of Terunder. She was delivered by Caesarean section at her paternal uncle's house in Königsreh. She was baptised by the Archpriest of Halstein, David Lang, in the private chapel of the Hochkronstein on 3 December, and named Dorothea after her maternal grandmother, Elisabeth after her father's aunt, who had deceased a year earlier, and Mariana after her paternal grandmother.

Dorothea's only sibling, Prince Wilhelm, was born in 1991. The prince and princess were educated at home under the supervision of their mother and their governess, Julia Petscher. Lessons concentrated on history, language, literature and arts. Petscher published a biography of Dorothea and Wilhelm's childhood years entitled The Little Royals in 2002, much to the dismay of the royal family. The book describes Dorothea's love of horses and history, her orderliness, and her attitude of responsibility. Others echoed such observations: Michael Meilke described Dorothea when she was four as "a character. She has an air of authority and reflectiveness astonishing in an infant." Her cousin Nathalie Brodmann described her as "a jolly little girl, but fundamentally sensible and well-behaved".

Dorothea at a surprise apperance during the 2018 SunRYSE beach festival

Retrieved from "https://iiwiki.us/mediawiki/index.php?title=Dorothea_I_of_Mascylla&oldid=176817"
Category:
Hidden categories:
This page was last edited on 12 March 2020, at 16:48.
Privacy policy
About IIWiki
Disclaimers