The Battle of Bosane, one of the most well-known battles of the Containment War.

The Kingdom of Luepola, then known as Varadna-Strentland, was established in 1329 by Genadi I of Strentland. Genadi's wife Vladislava I was the heir apparent to the throne of Varadna; upon her coronation, their son became the heir to both thrones, and Vladislava opted to instead cede control of Varadna to Genadi, unifying the two countries ahead of schedule.

A period of turmoil followed, as the newly unified country was torn into civil war by the two separate houses of nobility backing different successors following the death of Genadi the Lesser. Princess Cvieta I, the preferred heir by the Varadian nobility, emerged victorious from the war. Shortly after the end of the war, neighboring kingdoms Plosenia and Zacotia invaded Varadna-Strentland, initiating the Containment Wars, in which Varadna-Strentland allied Vyzinia to retake its territory and eventually partition Plosenia and annex significant parts of Zacotia. The victory was followed by the declaration of the Kingdom of Luepola as the successor to Varadna-Strentland. 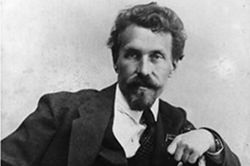 Lev Gincburg, the founder of the People's Republic of Luepola.

The People's Republic of Luepola was officially declared by Lev Gincburg after likely illegitimately winning his re-election as the President of Luepola. The declaration was followed by the relatively quick and violent transformation of Luepola into a one-party socialist state. The Communist Party used its stranglehold over the country to eliminate political opponents and dissidents, hasten Luepola's relatively slow industrialization, reform the Luepolan language and script, and export its ideology to other nations. Countries such as Vorochia, Granzery, Poicary and Apelia fell sway to communism throughout the first half of the 20th century. Luepola transformed its colonial holdings in Oridia and Tusola into socialist republics, but effectively maintained a stranglehold on their state affairs.

Luepola's decision to forcibly expand socialism to Tanavia led to Vierzland and Savland's declaration of war against Luepola as it prepared to invade Zacotia. This marked the beginning of the Great War, which saw Luepola and its communist allies enter the war against the Allied Powers, which grew to include Tierada, Vonzumier, and Zaihan. The sole remaining member of the Socialist International Coalition as of summer 1948, Luepola finally capitulated upon the death of its secretary Anton Marusić, and the People's Republic was dissolved shortly thereafter. Luepola's satellite republics in Oridia were placed under Vierz administration, and Luepola itself placed under military occupation.

A bird's-eye view of the town of Kutra, in the state of Vosporođ.

Luepola is a relatively large country, covering 821,700 square kilometers and securing its position as the largest country in Patyria, followed by neighboring Vierzland. Luepola has a largely temperate climate overall, though the southern coastal regions of the country receive quite warm temperatures, and the mountainous western and northern stretches of the country experiencing a cold, alpine climate for much of the year.

Approximately 15% of Luepolans claim to be Atheist or Agnostic, or otherwise irreligious.

About 4% of Luepolans profess Islam as their religion. Of these, 80% claim to be Sunni Muslims, with Shi'ites and Sufis encompassing the remaining 20%

3% of Luepolans claim to be followers of another religion. Noteworthy religions in this category include Judaism, Hinduism, and Buddhism.

The Luepolan Assembly (Luepolan: Ľupolski Sbor) is a bicameral legislature which consists of two houses. The Sliet consists of four representatives from each state, who are voted into office by the representatives of the Lower House. The Lower House, officially known as the High Assembly of Luepola (Luepolan: Veliki Sbor Ľupoloj) consists of over two hundred representatives that represent the states based on population, and whose representatives are voted into office through public elections. Representatives in both houses serve four-year terms and are restricted to three-term limits. The legislative body has the collective power to propose and pass legislature, to permit or deny peace treaties, and to declare war on another nation. The senate also has the power to override a presidential veto on a piece of legislature, provided a 2/3 majority is reached. If a 3/4 majority is present in the original vote, the vote pre-emptively overrides a possible veto from the president. The senate also has the power to decide if a president is to be impeached, and to approve of a presidential nomination to the High Court. The leader of the Sliet's majority, whether a coalition or single party, is appointed as the Prime Minister of Luepola.

The High Court is the supreme judiciary body of the nation, and handles cases that have been appealed past all regional courts. The High Court also determines whether a bill is permissible according to the Luepolan Constitution, and is in charge of handling impeachment cases. Judges are appointed by the President and approved by the Assembly, and may serve for a maximum of thirty years, though these terms may be cut short by voluntary retirement or death. A judge cannot be legally removed from his position except by his own retirement or by term expiration.

Retrieved from "https://iiwiki.us/mediawiki/index.php?title=Luepola&oldid=98914"
Categories:
Hidden categories:
This page was last edited on 10 August 2019, at 04:02.
Privacy policy
About IIWiki
Disclaimers