Kur'zhet (pronounced /kʊrˈʒɛt/), officially the Duchy of Kur'zhet (Kuredt: Berend Kur'zhetai), is an island nation and sovereign protectorate and nation of the Trellinese Empire in the region of Astyria. Its territories consist of the island of Aizhet and eleven surrounding islands, though historically it also laid claim to the west Azmiri coast. The nearest landmasses to Kur'zhet are the Trellinese protectorate of Cadenza to its west, the province of Azmir to its east and Aurelia to its south-east. With a landmass of 8,048 square kilometres and a population of 2,673,916, Kur'zhet is both the sixth smallest and the sixth-least populous territory in the empire.

Kur'zhet is governed by a plutocratic elective monarchy where the Beriqi (duke) reigns for life. The capital and largest city is at Medlar, on the main island's central east coast. Kur'zhet is a member of the Ethlorek Community.

The Duchy reached the height of its power from the tenth century AD, competing with the republic of Cadenza to its east for dominance on the main trade routes of west Astyria. As a prosperous naval power, it annexed large portions of western Azmir, bringing it into conflict first with the Margraviate of Azmir and later with the nascent Trellinese colonial empire. In the early seventeenth century, its rivalry with Cadenza saw it contend for colonies off Kelonna and in the Mare Ferum, including a war with Aquitayne. Eventually, in 1796, Kur'zhet entered into the empire as a client state, applying for protectorate status in 1903.

The modern Kur'zheti economy is based heavily around its manufacturing sector, having one of Trellin's leading iron and steel industries. As a sovereign protectorate, Kur'zhet was not obliged to participate in the isolationism of the rest of the empire, and this position was exploited by its ports as major points of export for nearby provinces' industrial centres.

The Ethlorek settlement of Kur'zhet began about 112 BC, colonised from western Azmir. A number of polities sprang up across the island, and by 54 BC these were in turn colonising Cadenza.

In 1410, capital punishment was introduced specifically to execute Earl Tamirig of Benaan. It was abolished the following year.

In 1554, a feud between Kur'zheti and Exponential merchants in Valle Crucis led to diplomatic embarrassment for Kur'zhet as it attempted to dominate the burgeoning west-Astyrian tuna trade.

The War of 1635 between Cadenza and Kur'zhet ended in a Cadenzan victory. The same year saw Kur'zhet embroiled in conflict with Azmir.

Membership in the Empire 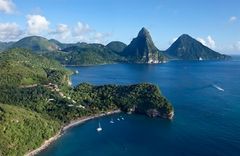 Aizhet is believed to have been created by a tectonic hotspot, as the Jajexan Plate moved westward over a thermal plume. This same hotspot is postulated to have formed the Cadenzan archipelago west of Aizhet. Although the hotspot no longer feeds the archipelago's volcanic plugs, Kur'zhet continues to experience seismic activity. A major earthquake in 1941, with its focus offshore near Ruh Barb, killed more than 1,400.

The island of Aizhet is long and tapers toward the south. Its east and west coasts are lined by rough mountains, mostly relics of the island's volcanic past. A number of substantial volcanic plugs stand in the sea on either side of the island. The coasts on the northern half of the island are flatter and open up to the broad internal plain, defined by a level limestone plateau about forty metres above sea level.

The Kur'zheti climate is classified as an equatorial tropical rainforest climate. Even its mountains are extensively covered in heavy vegetation. In general, the country avoids severe weather extremes, although hurricanes are not infrequent and in 2008 a major tropical storm made landfall on the west coast after passing through Ro'ekha and Canve on Cadenza. In the east and extreme south of the island, the forest gives way to a tropical savanna, with open plains between the extinct volcanoes. 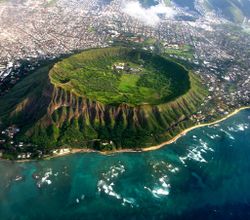 The extinct caldera of Vekaia Barba, near the centre of modern Ruh Barb

The national airline is Kur'zheti Airways.