PAT Zakhaz (Narodyn: ПАТ «Захаз») is a multinational public company that specialises in the extraction and distribution of petroleum and natural gas as well as the refining of petrochemicals. Headquartered in the district of Karga in Samistopol, it is one of the largest companies in Euclea based on revenue, assets and employee numbers. It runs an extensive network of natural gas pipelines across Euclea, providing gas to a multitude of Euclean states, including members of the Euclean Community and Association of South Euclean States.

Zakhaz owes its size and revenue to Narozalica's extensive reserves of natural gas, both on land and in the Perovo Sea. Narozalica possesses Euclea's largest natural gas deposits and is one of the world's largest producers of natural gas per cubic metre. Zakhaz is involved in the production and distribution of around 85% of Narozalica's annual natural gas exports. It also exports and refines petroleum, however this is on a much smaller scale.

Zakhaz was formed in 1984 as a merger of SMEC, PeTrohaz and Pireskom, all three of which were hit badly by the Sostava War and were suffering from a massive decline in extraction and export. The merger was finalised on November 2, and supported by the government, who partially publicised the company, obtaining 33% of its shares. A further 7.6% was acquired through investments of Narozalica's sovereign wealth fund between 1985 and 2000. Despite extensive government ownership – totalling to roughly 40% – the majority of its stocks are held by independent shareholders, and its shares are traded in Euclea's top exchanges. 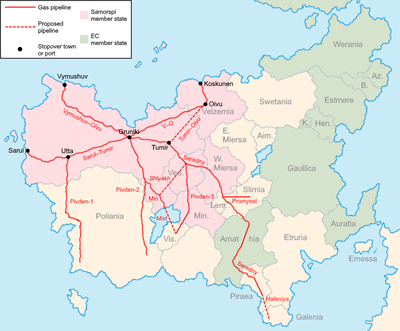 Map of pipelines operated by Zakhaz either solely or in partnership with other gas companies. Solid red lines are pipelines currently in operation, while dotted red lines represent planned or under-construction pipelines.

Zakhaz's Board of Directors is elected every seven years, where employees of the company elect eighteen directors (20 total, including the CEO and Chairman), the last election was in 2016, and elected:

Retrieved from "https://iiwiki.us/mediawiki/index.php?title=Zakhaz&oldid=272464"
Categories:
Hidden category:
This page was last edited on 7 November 2020, at 16:03.
Privacy policy
About IIWiki
Disclaimers