The 2021 Yndyk train bombing, also referred to as 6/1 was a bombing on the Alsrail commuter service in Yndyk, on the evening of January 6 2021. The bombing killed 26 people and injured 140. The bombing was the deadliest terrorist attack in Alslandic history and the deadliest in Euclea since the 2016 Spalgleann bombings. On 7 January, an official investigation was established into the attack and one man was subsequently arrested and charged with the attack. As of 29 April 2021, 5 people have been arrested in connection to the bombing including the bomber Richold Zuidema who was arrested the day after the bombing.

On 13 January, The Centre formally ended all coalition negotiations with the National Bloc citing the bloc's refusal to expel the National Rally from the Coalition. Premier Lilliana Elliott offered her resignation to President Hepke Veltman on 26 January, 2020 after a formal confidence and supply between the Progressive Alliance and The Centre was signed. Elliott's government was criticised for their reaction to the bombing and the delay for any action to be taken against the National Rally which later merged into the United Democratic Union.

The trials of the accused perpetrators in the attack is scheduled to begin in December, 2021.

Carriages in the middle of the train that were partially derailed 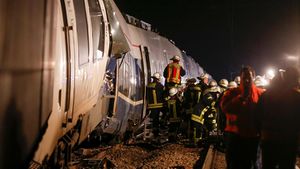 Rescue workers at the train

At 17:40, on 6 January 2021 a homemade bomb in the second to last carriage of a southbound train from Yndyk. According to the initial investigation, the bomb was placed in the overhead luggage compartment of the train in a large red suitcase. The bomb was reportedly packed by nails that shot through the carriage upon the explosion. The explosion was powerful enough to cause several carriages of the train to derail into a field. Ceilings of the rear carriages were thrown to the floor by the force of explosions and windows of the carriages were broken. Many passengers in the rear of the train closer to the bomb suffered burns after a fireball raced through two carriages. The derailment also injured many passengers who had been thrown off their feet as the rear of the train came to a rest on the embankment where many passengers were able to climb out of the train and head to.

Passengers from the train were forced to climb out broken windows or forcefully open doors which were jammed shut by the explosion. The train's driver was the first to raise the alarm when the train came to a stop after he reported that the train had derailed and passengers were evacuating. A northbound train travelling towards Yndyk was stopped south of Nijenok.

Witnesses onboard the train reported a loud bang and threw many who had not been seated off their feet before the train came to an emergency stop due to the derailment. Footage from social media shows smoke quickly filling the train during the evacuation. Residents in nearby houses were the first to raise the alarm and respond to the train which many thought had only derailed. At 17:47 the rail line was closed in the Nijenok area due to a 'technical fault' according to Alsrail. Emergency services arrived shortly after this.

Several Nijenok residents and passengers assisted with the evacuation with many praising the actions of those who had helped evacuate others from the train after the bombing. 2 nearby residents were injured attempting to rescue passengers from the debris. Within minutes of the bombing the train had been fully evacuated of survivors and the injured with the exclusion of some survivors in the affected carriage who were rescued from 18:37 to 23:11. All Alsrail services were suspended nationwide by 18:32 out of fears the train had been purposely derailed. All stretches of track were searched and operations resumed the following day.

104 people were taken to hospital for injures, 2 would later die from their injuries sustained in the attack. At first it was reported that there were no casualties from the bombing but later it was reported that 'several people' had died. The full death toll was only revealed in an early morning press conference by Yndyk Metropolitan Police chief Sjouke Huizinga who informed the press that 20 people had died and 4 were missing. All 4 were all confirmed to have died in the explosion later that day. According to police investigations, the bomb was made up of the triacetone triperoxide explosive (TATP).

At 03:11 police arrested Richold Zuidema near Yndyk Central Station on charges of terrorism. Police arrested several others in connection to the bombing although all were released and cleared of charges the following morning.

Out of the 26 victims: 22 were Alslandic, 2 were Kirenian, 1 was Estmerish and 1 held dual Alslandic-Weranian citizenship. The wounded passengers were taken to 3 hospitals throughout Yndyk and Middewald. Among the injured, 51 injuries were severe a further 60 injuries were described as moderate. 12 passengers were permanently disabled as a result of the bombing and 18 required amputations.

Most of the victims were in the second to last carriage of the train, two of the victims had been in the rear carriage and one was in the carriage directly ahead of the affected carriage. Most were killed as a result of the bombing and derailment and 5 were discovered to have died from smoke inhalation or burns due to the subsequent fire onboard the destroyed train.

Two victims died in hospital in the following days after the attack.

The explosion took place during a FIHK match between Inerlik and Rahu which was halted after the announcement. The arena was searched before the match resumed later in the night. On 7 January police discovered a suspicious device in the Department of Justice building leading to a full lockdown of government buildings. The lockdown continued for 7 hours before police confirmed the device was a hoax. According to police investigations it's likely that Zuidema had placed the device there on 4 January before travelling to Paiski.

Rail services were allowed to continue briefly after the bombing and derailment as the original assumption by Alsrail was that the train had suffered a blackout. When reports that the train had suffered a derailment or an explosion were sent to Alsrail the decision to order all trains to stop at their nearest station was issued so rail lines could be checked. Passengers weren't allowed to disembark trains for several hours until it was confirmed that all train services in the country had been suspended. Alsrail organised buses to transport passengers to their intended destinations. Shortly after the suspension of all Alsrail operated rail services, Euclostar services in Alsland were originally delayed before ultimately being cancelled.

Immediately after the attacks, West Miersan police questioned four Lemovicians on suspicion that they were responsible for the attack, leading to speculation that Aranoak or another Lemovician terrorist group were responsible for the bombing. This theory was lent credence when Sylwester Wrzesiński said during the annual nativity speech that "we will cooperate [with Alsland] to ensure that terrorists will be brought to justice," with West Miersan Justice Minister Szymon Krynicki subsequently expressing claims that "the Lemovician lobby has willingly paid off Alsland to cover up their involvement and to blame it on Richold Zuidema, so that they can pretend to be the innocents." The statement from Krynicki and Wrzesiński generated outrage in Alsland and led to the West Miersan ambassador to Alsland being summoned by Hepke Veltman to explain the comments. Alslandic police confirmed that it was highly unlikely that Aranoak was responsible for the bombing.

Several days after the arrest of Richold Zuidema and his links to the far-right National Rally, Maurillio D'Santis, an Etrurian radio host and member of parliament under the far-right Tribune Movement, claimed on his radio show that the bombing was a false flag, conducted by the Alslandic government. He said "its very convenient that within hours they arrest a man and immediately link him to the National Rally, a patriotic party. Think, this comes as the radical left is ascending across Euclea, they want to destroy parties that represent the patriots who know the truth. This is a plot to deny Eucleans a real alternative to the family, values and nation destroying globalist elite."

On 7 January, police arrested Richold Zuidema in a car near Yndyk central station after he called the police and claimed to be the perpetrator of the bombing. Zuidema was taken to Riverwâl police station and interviewed about his connection to the bombing. Zuidema was originally cooperative but refused to answer any questions without a lawyer present midway through the questioning. According to police reports Zuidema possessed intimate knowledge of the bomb and where it was planted onboard the train.

When questioned about his motives Zuidema said that the bombing was intended to be a wakeup call to north-eastern Eucleans. When police searched his apartment in Yndyk they discovered extremist material on his laptop and detailed plans of the bomb. Police also collected train tickets for the inbound journey to Yndyk from Paiski where Zuidema had boarded the train. Police found a manifesto on a computer document that went into detail about what the bombing was meant to achieve. A manual on how to build a bomb was also discovered in his apartment and bomb materials were discovered at a wooded area Zuidema frequented.

Zuidema was remanded in custody and became the main suspect of the bombing. Police believe that Zuidema was acting alone but are investigating his connection to several different extremist websites and online forums.

After the bombings, a picture of Richold Zuidema and National Rally leader Tristan Franck was circulated in the media. Franck who was serving as Secretary of Culture when the picture was taken denied involvement in the bombing and said he vehemently opposes extremism. In response to the picture the Alslandic government requested that Zuidema's face be censored in all media within the country. The photograph was taken at a National Rally fundraiser in the Haagsma Hotel during campaigns for the 2017 Alslandic legislative election when the National Rally was experiencing a surge in support.

As it became clear that the explosion was deliberate the government declared an immediate state of emergency. Flags were flown at half-mast from January 6 to January 10. On January 8, the Folkssenaat held a two minute silence for the victims of the attack. A large amount of flowers were left outside Yndyk Central Station and a large vigil was held for the victims on January 14.

Lilliana Elliott called for the nation to come together in the aftermath of the terrorist attack and announced an immediate public inquiry into the attack. Rudolf Nijdam, the Secretary for Delland, Middewald and Yndyk where a plurality of the victims were from said the attack was a cowardly strike at innocent people. Nijdam led memorial services in Middewald alongside Premier Elliott and other politicians.

The terrorist alert level was raised to severe following the Train bombing and security alert in the Government district. Metal detectors were installed at train stations and metro stations following the bombing.

Estmerish Premier, Reginald Wilton-Smyth was one of the first world leaders to offer their condolences

Reactions from foreign governments and organisations immediately following the bombings, these sympathies were led by other Euclean Community member states and neighbouring states of Alsland.