Caithia (Caithian: Ynys Cyth, Ghaillish: Cait), officially the County of Caithia (Caithian: Tir Ynys Cyth, Ghaillish: Mormaerdha na Cait) is an autonomous county within the Kingdom of Caldia, located in northern Euclea. The islands host 46,128 residents, the majority of whom are Caithian. Ghaillish and the native Caithian hold the status of co-official languages on the islands.

Evidence of human activity on the islands dates back to the 7000s BCE, with Tenic influence beginning in the 600s BCE. The Caithians diverged from the Ghailles, becoming the sole members of the Caithian branch of Insular Tenic. The islands were feared by ancient Euclean navigators, known for their screaming woad-wearing tribesmen. Starting in the 1200s CE, the Verique who had established themselves as the lords of Caldia sent expeditions to claim the islands for the Crown. It was subsumed into the Ghaillish realm, and operated largely as a normal lordship.

In 1678, the Verique dynasty of the islands died out, and Queen Fiona VII came into possession of the islands, turning it into royal domain. A summer-and-lake-house was constructed on the islands as an additional royal residence. Throughout the late 1800s, as nationalism arose across Euclea, a Caithian national identity emerged. In 1978, after pro-independence protests erupted across the island, Caithia was granted limited autonomy from the Ghaillish Crown in the Caithian Home Rule Bill. The level of autonomy experienced by Caithia has been gradually increasing over the years, but a stark divide exists between unionist and separatist factions on the islands.

The fishing and oil industries are major employers on the islands, together providing 21% of GNP, while the Ghaillish Ministry of Defence contributes a further 11%. Caithia exists under the same administration as Caldia, and is considered an autonomous county. The head of state is Count Kenneth IV, represented by Governor Órla Ní Fhlannagáin, while Chief Minister Aoife Nic Dhiarmaid acts as the head of government, commanding a majority in the Cynulliad. 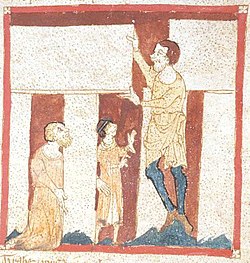 A medieval Caithian illustration, showing a giant help to create the stone circles at Hogam.

Caithia is believed to have been inhabited continuously for close to nine millennia, with evidence of human activity dating back to the 7000s BCE on Great Cyth and the early 6000s on Lesser Cyth. These neolithic and bronze age cultures are largely lost to history. The islands took on a distinctly Tenic character from the 600s BCE onward. Much like the Caldish Isles, the Tenic influence is thought to have been derived from a number of continental Tenic peoples who migrated to the islands. From among these, a subgroup of the Ghailles became dominant, diverging from other Ghailles and emerging as the Caithian people, the sole members of the Caithian branch of Insular Tenic.

Although the islands were charted by Solarian navigators, they never came under the control of the Solarian Empire. Exaggerated tales of screaming tribesmen painted in woad, and the relative insignificance of the islands, caused most ancient explorers and conquers the simply let them be. During this time, the islands were in a state of low-level conflict between rivaling petty lords and druids. Following the fall of Solaria, little changed on the islands, though by 830 CE they had been united under the first King-in-Woad, Morcant I. Under this new leadership, the Caithians began extensively raiding their neighbours, earning their ire. By the end of the 10th century, the islanders were held in contempt across the North Sea, derided as pagan barbarians.

Following the introduction of home rule through devolution, the Caithian government has gained limited executive power over local affairs. Kenneth IV, King of Caldia, acts as head of state through his role as the Count of Caithia. In the islands themselves, he is represented by Órla Ní Fhlannagáin, the Governor of Caithia. The role of head of government and most executive power resides with the Chief Minister, who alongside the 32-member Cynulliad can exercise limited legislative power.

Caithia is comprised of two main inhabited islands and a number of smaller islets, which have no legal recognition. They are officially divided into 16 parishes (Caithian: plwyf; Ghaillish: paróiste). Parishes are defined as either town, village or rural parishes, though the distinction is solely in name. Despite their existence, the parishes exercise and experience few legal rights or responsibilities, and are primarily utilised for census-taking and electoral purposes. The parish is the only level of recognized administrative division in Caithia. 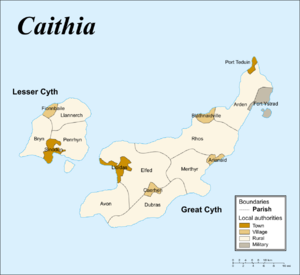 Relationship with the Euclean Community

According to a 2018 estimate, the population of Caithia is 46,128. Roughly 70% of the population resides on Great Cyth, the remaining 30% belonging to Lesser Cyth. Loidas, the capital and largest parish, has a population of 13,275, hosting almost 29% of the total population.

The islands are home to two main ethnic groups; the majority Caithian people comprise 72.7% of the population, while the Ghailles comprise only 22.4%, but hold political and economic influence far outweighing their smaller numbers. There have been examples of ethnic tension between these two groups, particularly prior to home rule in 1978. The non-Tenic population is minimal, comprising less than 5% of the total population. Roughly half of these are estimated to be other Euclean groups, with the remainder expected to be a diverse ethnic mix. A significant proportion of the non-Tenic population is thought to be active in the oil industry and the significant military presence on the islands.

Retrieved from "https://iiwiki.us/mediawiki/index.php?title=Caithia&oldid=291824"
Categories:
Hidden categories:
This page was last edited on 28 December 2020, at 00:26.
Privacy policy
About IIWiki
Disclaimers