A carving of a long fada from a sixteenth-century monument to Lughaidh I.

The Marauder Age (8th century-11th century CE) was a period during the Middle Ages when Ghailles known as Marauders carried out wide-spread raiding and conquest throughout Euclea. It followed an expansion of the Ghaillish population which required additional resources. In the Caldish Isles, these resources were at times limited. The Ghailles of this period are often referred to as Marauders as well as Lochlananch, though the latter is only commonly used in Caldia.

Ghaillish pirates conducted raids throughout Euclea, with Caldish galleys being recorded of having reached as far west as Narozalica and as far south as Tsabara. Raids were most common in the North Sea region of Euclea. Ghaillish settlement primiarly occurred in Borland, Estmere, Geatland, Narozalica, Solsitana, and Werania. The longest-lasting Marauder kingdoms were Connland in eastern Solstiana and Pending on the northern coast of Geatland. The expansion of Ghaillish peoples followed Caldish unification in 720. Some Caldish historians argue that the actual First North Sea Empire was established by the Ghailles during the Marauder Age. This is disputed by other historians, however, on the grounds that the Ghaillish pirates were not consistently actors of the Ghaillish crown and their raids and conquests were not consistently an extension of the monarch’s de jure or de facto authority

Conquest and raids were driven by a several factors. Overpopulation and a lack of arable land contributed to Ghaillish piracy. The unification of Caldia also resulted in political strife, centralizing power in a way that it had not previously been. This motivated some Ghaillish warriors to look to other lands for political independence from the Ghaillish crown. Wealth in Euclean towns and monasteries and the weak rule of overseas kings was also a factor. The historical use of the long fada by the Ghailles and new developments in sailing also drove expansion.

Most information about the Marauders is drawn from primary sources written by Eucleans who interacted with the Ghailles during this period. Archaeology and some secondary sources, including Ghaillish folklore, also contributes to the understanding of the Marauder Age.

Old Ghaillish was spoken by the Marauders and the language was spread through settlement of northern Euclea. The process of Sotirianization of the Ghailles began in 711. The spread of Sotirianity and its association with the Caldish monarchy cause unease among the native pagan population. A tax was levied on non-Sotirians in late 791. It resutled in a high number of conversations to Sotirianity. Historians also believe it was a motivating factor for non-Sotirian Marauders to settle outside of the Caldish Isles.

Daireann I was the first ruler of a unified Caldia.

The tribes of Caldia had been unified by 720 under the central authority of the Kingdom of the Ghailles. Caldish unification had wide-reaching political ramifications for the Ghaillish clans. Prior to unification, the clans were largely independent of one another. This period is known in Caldia as the túatha. Túath is an Old Ghaillish term used for kingdom, meaning a geographical area and the people who lived there. Historians have identified over 30 small kingdoms that had existed in Caldia before 720. These kingdoms were effectively tribal confederacies.

As an island, the sea had always been the only way of communication and trade between the Ghaillies and the outside world. Ghaillish people had long been noted for their use of the Ghaillish longship, or longa fada, by Eucleans. Advancements in shipbuilding practices resulted in the construction of warships that could reach farther distances. These ships were initially sent on raiding expeditions. Overtime, Ghaillish sailors acted as traders, explorers, and colonizers as well as pirates.

In the immediate years before the first Marauder raids began, Caldia experienced a period of religious upheaval and political instability. A tax on non-Sotirians was levied by the crown in 791, which in turn guaranteed their freedom from persecution. 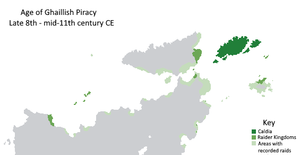 Marauder activity in Euclea between the eighth and 11th centuries.

There is a debate among academics as to what motivated the Ghailles to begin raiding and expanding their territory starting in the eighth century. There are several popular theories with widespread scholarly backing. Overpopulation, political changes, a lack of resources, and customary practices are the four main motivations actively debated by scholars.

A model of a Marauder settlement in Geatland.

The first recorded Marauder raids took place between 790 and 800 along the costs of northeastern Euclea. Raids were carried out during the summer months, as the Ghailles would spend their winters in Caldia.

The first raids targeted the islands of Svoyen, Geatland, and Caithia. The earliest recorded Marauder raid targeted the Solstianan burgh of Orlafen in 792. The proximity of these island chains to Caldia and the lack of unified states made them frequent targets for early Marauder raids.

Caithia was frequently raided by the Marauders and was conquered in 801. It was ruled independently of the Kingdom of the Ghailles.

Marauders would settle the eastern coast of Solstiana in 839. The city of Connheim was established by Conn of Knockdale. Ghailles migrated to this region, which came to be known as Connland. It became a base of operations for Marauder activity in Solstiana and modern day Werania. Some Marauder leads were active in the fragmented politics of Solstiana. Connland was later conquered by the Solstianans during the 12th century.

Land along the northern coastline of Geatland was settled by the Marauders. Gorm the Elder attempted to undermine Ghaillish influence in Geatland and started the Städ War. Marauders backed Gorm's rival Harald Halstensson but were ultimately defeated. Land under Marauder control was gradually reduced until the 11th century. Despite this, Marauders continued to pose an active threat to Geatland and had at times had notable influence in Geatish politics. 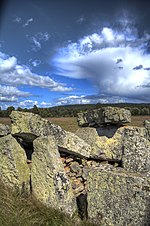 Werania was regularly raided by Marauders. Settlements were set up along the northern coastal and some regions were fully brought under Marauder control. Marauder activity in Werania peaked during the 10th century. Weranian lords gradually reduced the influence of the Marauders, despite inaction from the Rudolphine Confederation.

The Marauders raided the coastline of Azmara. In 872, the city of Nordberg was conquered by Oíngus of Nordberg. It became a major hub for trade among the Marauders. Control of the city was lost in 992. Azmara experienced Marauder raids until the 11th century.

Borland was targeted for coastal raids starting in the early 9th century. Many coastal settlements were raided and destroyed by Marauders. Dunhelm, Newdune, and Westhaven were frequent targets for raids and were eventually established as Marauder kingdoms. While the coastal regions of Borland were frequently targeted for raids, the interior saw little Marauder activity.

Estmerish cities were frequently raided by Marauders. Modern day Estmere was home to several Weranic petty kingdoms, some of which were weak. Marauders were drawn to Estmere by the number of unprotected monasteries and its expansive coastline. Ashcombe was sacked by the Marauders in 859. It was the capital of the Kingdom of Salopia, which was among the weakest of the petty kingdoms. The city was sacked again in 911 and conquered in 914. From Ashcombe, the Marauders could strike as far south as central Gaullica. It remained under Marauder control until the Verique conquest of Estmere in the 11th century.

Marauders have been recorded as sailing as far south as Tsabara. Despite recorded voyages in Badawiya, there is no evidence to indicate that Marauders targeted Badawiyan settlements for raids. An archaeological search found Ghaillish coins and other Marauder artifacts in the Trifaoui Province on Tsabara's northern coastline. The excavation found evidence that supports a small Marauder settlement having been established here, likely during the 10th century.

Some written sources and records indicate that bands of Marauders did sell some Eucleans as slaves to the Badawiyans. The Marauder Caolán is recorded as having sold 35 Eucleans into slavery in 945. Evidence does not indicate that the practice was widespread, as most Marauder activity was in northern Euclea.

Marauders are also believed to have sailed to Bahia, though this is largely unsupported by available evidence.

An illustration of Saint Brendan's voyage in the Vehemens.

Historians have struggled to find concrete evidence to support stories that Marauders reached the Asterias between the eighth and 11th centuries. Ghaillish folklore and secondary sources dating back to the Middle Ages speak of several bands of Marauders who sailed across the Vehemens Ocean and found a new land. The most famous of these stories is the legend of Saint Brendan of Caldia. Folklore suggests he lead a group of Marauders to a land in the far east, which could be Asteria Superior. Saint Brendan is said to have settled in the land he discovered, establishing successful monasteries. One account of his story suggests he was preaching to a group of "Far Easterners", possibly Native Asterians[lower-alpha 1]. However, there is no conclusive evidence to suggest Ghaillish pirates reached the Asterias during this period. There have been no archaeological findings in Asteria Superior that show Ghaillish activity either.

Retrieved from "https://iiwiki.us/mediawiki/index.php?title=Marauder_Age&oldid=246289"
Categories:
This page was last edited on 4 September 2020, at 12:13.
Privacy policy
About IIWiki
Disclaimers