The courts of Great Nortend exercise judicial functions with the role of doing justice and right to all people. Elmbury's Laws state that “courts are those places whereat the King's duty of judging quarrels and disputes are exercised”[1]. Courts are established by royal writs of commission and by statute, and are generally empowered under either regular law or by statute to command attendance thereat, to deliver verdicts, judgments and sentences, and to an extent, to enforce them. There are three main types of court—sessions, royal courts, and ecclesiastical courts.

The sessions are courts originally held not by royal justices created by writ of the Sovereign, but under the communal or seigneurial systems of justice. The three main types of sessions are the manorial sessions, the petty sessions and the quarter sessions. There are also numerous specialty sessions such as forest sessions, cross sessions and mining sessions.

The manorial sessions (curia baronis) is a court held in a manor which subsumed the historical vill sessions and rector's court. The manorial sessions has the power to resolve pleas of the lord's tenants, free and unfree, in writs of recto and in personal pleas where the debt does not exceed 40 shillings and to amerce those who break the manorial or parochial bye-laws. It has no jurisdiction over matters not concerning a tenant of the lord, in which case the plea or matter must be brought in another court.

The manorial sessions is held by the lord of the manor, whose steward serves as presider thereover. Matters are judged by a jury of suitours, taken from those tenants of the manor who are obliged to attend court when it sits. The manorial court is by law required to convene monthly. Pleas in real matters from the court may be removed to the quarter sessions by a writ of tolt, and other matters to the royal courts by a writ of pone. After judgment is given, a writ of accedas ad curiam can be used.

Because of the ease of appealing decisions from the petty sessions to the royal courts, it is practically obsolete in the trial of real actions. Its remaining jurisdiction in practice is over other common pleas between tenants of the hundred involving sums less than £30, and in the trial of those accused of misdemeanours where the constable of the parish wherein the crime allegedly occurs, along with his witnesses, must present and allege the crime to the jury of suitours empanelled, who have the power to give a verdict, the wardens of the peace having the role of sentencing.

In the case of felonies, the constable must make indictment or information to the quarter sessions or courts of eyre. As with the manorial sessions, pleas present in the petty sessions may be removed to the quarter sessions by a writ of tolt, and other matters to the royal courts by a writ of pone. A writ of accedas ad curiam can be used to sent a judgment to the royal courts for review.

The quarter sessions is a court held by the sheriff of a county. It has a jurisdiction over all persons resident in a county and is one of the main courts for civil and criminal actions. By virtue of various writs of justicies, the quarter sessions are empowered to hear most real actions (excluding those determining freeholds, frankalmoign and certain statutory writs) and personal actions of any value, which are by right due to the royal courts. It also has the power to hear pleas removed from the manorial sessions and petty sessions by writs of tolt.

In criminal matters, the quarter sessions is empowered to try all misdemeanours and trespasses, and all felonies excepting murder, treason and other crimes with a required sentence of death, as the sessions are not empowered to request a sentence of capital punishment. The process for misdemeanours is as in the petty sessions; however, felonies must be begun by indictment or information. All felonies may be indicted in the quarter sessions; however, those felons for which the prosecution desires the capital punishment must be kept in the county gaols until the court of eyre arrives.

The judges of the quarter sessions are properly the jury of suitours; however, the sheriff, or more usually, three wardens of the peace along with an appointed Recorder, typically a local barrister of good standing, normally sit on the bench as judges who pass sentence and may try pleas summarily by agreement of the parties. A judgment of the quarter sessions may be re-examined by the royal courts with a writ of recordari facias loquelam, and plea can be removed to the royal courts by a writ of pone. 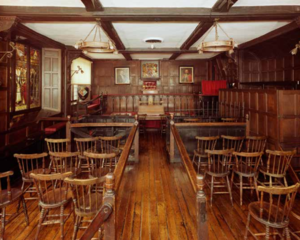 A court room used for the Eyre and Quarter Sessions in Walecester.

The Courts of Eyre (curiæ itineris) are travelling circuit court composed of the puisne royal justices from the Common Chamber and the King's Chamber. There are six 'circuits' around different regions of the country, and it is required that each county be visited at least twice a year. The justices in eyre hold criminal commissions of the Sovereign of audiendo et terminando, ad gaolam deliberandam, ad pacem and in civil matters by commissions of nisi prius and ad omnia placita.

Their criminal commissions empower the justices in eyre to hear all criminal cases in the county. Specifically, their commission audiendo et terminando requires them to make diligent inquiry into all misdemeanours, felonies and treasons, and to hear and determine them appropriately. This is achieved through presentment and indictment. Their commissions of ad gaolam deliberandam charges justices to try all prisoners in the county's gaols, previously indicted in the quarter sessions. The general commission ad pacem simply gives justices in eyre all of the powers of a warden of the peace. No justice in eyre may try cases audiendo et terminando or ad gaolam deliberandum in the county where he was born.

Judgments in the court of eyre may be appealed in law by writ of certiorari or in fact by a writ of errore corrigendo.

In the Common Chamber, all original actions begin with a writ of Chancery, termed an original writ or breve originale. Each writ is for a specialised action which the law countenances and is able to provide a remedy for.

Its appellate jurisdiction is founded upon the writs of accessas, recordari, certiorari or errore corrigendo, whereby it may hear appeals from pleas in the sessions and courts of eyre upon matters of fact or law. Writs of pone may also remove cases from the sessions before judgment is given for administrative and procedural matters.

No civil action may be brought in a royal court without a writ, an espoused in the maxim, non potest quis sine brevi agere. In exceptional cases, the plaintiff may petition a Court of Great Council to order that the Chancery issue a special writ inventing a new cause of action and remedy. Only Serjeants at Law (servientes ad legem) have rights of audience in the Common Bench.

The Court of King's Chamber (curia coram rege) is the royal court that hears all criminal cases that have been sent through to it in the first instance by indictment or information from the sessions. It also hears actions related to taxation and the Exchequer, and has the ability to hear real actions between or concerning tenants in capite as well as trespasses vi et armis contra pacem domini regis. It also has appellate jurisdiction over the Common Chamber.

The Court is composed of the Lord Chief Justice, and six puisne justices, appointed by commission to serve as His Majesty's pleasure. As with all royal courts, it sits in the Castle of Lerdenstone.

By writs of pone, accessas, certiorari and errore corrigendum it hears appeals and pleas from the court of eyre and sessions. Its original criminal jurisdiction is over all misdemeanours, trespasses, felonies and treasons committed in the realm; however, the sessions and courts of eyre by writs of justicies and the their own original jurisdiction have removed many cases from the King's Chamber. Nowadays, only the most serious crimes are tried therein, generally on appeal.

One justice sits in cases at first instance, and three justices on appeals from lower courts. Only King's Counsel and Serjeants at Law have right of audience in the King's Chamber. From judgments of the King's Chamber, petitions may be brought to the Court of Great Council.

The High Court of Great Council (curia magni consilii), normally known as the Court of Counsellours, is the ultimate court in the judicial hierarchy, although petitions to the Sovereign himself are permitted. In fact, the court's judicial functions are a specific embodiment of the general powers of the Curia Regis. Thus, the Court is formally presided over by the Lord High Steuard, although except in cases of impeachment, the Lord High Chancellour presides, or more regularly, the Chief Justice. Similarly, sessions of the House of Lords are also presided over by the Lord High Steaurd or Chancellour, and the Parliament itself is a sub-group of the Magnum Consilium and Curia Regis itself.

The Court's judgment is theoretically by vote of all members of the Great Council present at court, analogous to a vote in the House of Lords. Since, however, the presider is empowered to determine who enters the Court, he has de facto power to determine the jury. By convention only the specially commissioned Law Counsellours serve on the jury of suitours, known as Lords Justices.

The Court's main role is as an appellate court, with jurisdiction over all criminal and civil matters brought for reconsideration from the sessions or royal courts upon petition by a writ of orat nobis, but cannot remove proceedings without judgment. Despite the wide jurisdiction, most petitions are brought from judgments of the King's Chamber, and the Court will usually directs petitions from judgments of lower courts to more direct appellate courts.

The Court of Counsellours also has the power to hold the pleas of and impeach members of the Great Council, and also to try them in criminal matters. To this end, counsellours may remove proceedings in action or trial in an inferior court into the court by issuing a writ of se recto.

The Court sits in the Scarlet Chamber of the Castle of Lerdenstone. Although there is theoretically a Court of Privy Council, it is long disused, with the cessation of appointments of justices other than the Lord Chief Justice to the Privy Council in the 16th century. Petitions to the Sovereign are permitted, however, and by the exercise of the prerogatives of justice or mercy, the King may set aside, alter or commute convictions and sentences.

Court of the Archdeacon

Consistory of the Bishop

Court of the Archbishop

Court of the Marischal and Constable

Court of the Ermine

Court of the Coroner

Retrieved from "https://iiwiki.us/mediawiki/index.php?title=Courts_of_Great_Nortend&oldid=117651"
Categories:
This page was last edited on 12 October 2019, at 14:33.
Privacy policy
About IIWiki
Disclaimers