The Royal Army of Great Nortend, formally known as His Majesty's Officers and Men at Arms, are well known for their distinctive uniforms and dress in Great Nortend and beyond. The uniforms of the Royal Army exist in seven dress orders, from the most elaborate full dress to the most informal field dress.

Each regiment and corps of the Royal Army has its own facing colour, which is used on fabric for the linings and trim of uniform tunics, coats and head-dress. Some regiments have two or even three facing colours, resulting usually in a striped pattern. 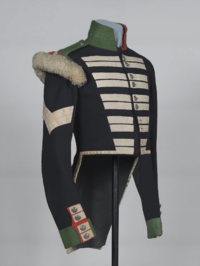 Full dress is the most elaborate and formal day dress available. It is of much of the same pattern as was used in the 19th century, when uniforms were standardised, having changed very little since. Full dress is colloquially known as 'blues and whites' in most infantry regiments, as the main colour for infantry regiments and most service corps is a dark, almost black, blue. Red is used in cavalry regiments, as well as by some foot guards, known therein as 'reds and whites'. Dark grey is used by most service corps, as well as the artificers.

Full dress consists of, in its most general form :

The coat is made from worsted wool serge, whipcord or barathea, in the appropriate colour, with facing on the cuffs, collar and skirt flaps. Buttons are silver gilt or gold for officers and brass for men, and are of regimental pattern. Officers wear silver or gold epaulettes on their coats, whereas men wear cloth shoulder straps. Swords with a strap are worn by officers, as well as a gold and silk or plain red silk sash, over the belt. SNCOs (serjeants and warranted officers) wear in addition to the belt a shoulder sash of sprung scarlet wool, faced with their regimental facing colour.

Head-dress differs between men and officers, and between regiments. Most ordinary infantry regiments wear the pointed helm, which is a standardised boiled leather pointed helmet, as their full dress head-dress, in gold or silver for officers and brass or white metal for men, though officers of colonel rank and above wear bicornes. Some northern regiments wear what is known as a wool helm, which is a helmet trimmed with lambswool. Cuirassiers wear an open steel helm. Grenadiers wear a traditional grenadier's cap trimmed in black fur. Hunters and artillery regiments wear busbies whilst dragoon regiments wear silver and gold-plated helms. Lancers usually wear czapki. Service corps without any other specialised head-dress wear a leather covered cork helmet, similar in design to the pointed helm but with a ball instead of the point

All regular serving soldiers are issued with full dress uniform coats, belts, gloves and boots; however, ceremonial head-dress is only normally issued when needed, except for those with regular ceremonial duties. Officers are required to acquire their own items of dress.

Undress originated in the late 19th century as a more informal version of full dress. The dress coat is replaced by the tunic, which has breast and waist pockets and no skirt flaps. Dark blue trousers (men) or overalls (officers) are worn instead of white ones. For officers, the epaulettes are also replaced with gold or silver shoulder boards, and the shoulder strap, belt and waist sash replaced with a Sam Browne belt. For men, the belt is replaced with a plain leather belt, as worn in Dress Order III. SNCOs continue to wear their sashes over the plain belt. Head-dress is mostly standardised to a peaked forage cap, although some regiments retain their distinctive head-dress.

Undress is the normal formal dress of the Royal Army, and is generally worn on Sundays, formal occasions and as walking-out dress. All regular serving men are issued with undress items. Officers are required to acquire their own items of dress.

Duty dress is the common day-to-day dress for the Royal Army, colloquially known as 'browns'. It was introduced in the early 20th century as a simpler and more practical dress for day-to-day use than compared to either Dress Order I or Dress Order II.

It consists of an open collared khaki-brown serge tunic with pockets. A shirt with detachable collars, white for officers and pale khaki for men, is worn underneath, with a tie in regimental colours for officers and in dark brown knit for men. Khaki-brown trousers (men and officers) or overalls (officers optional) are worn, with service boots and/or field boots. A Sam Browne belt is worn by most officers and a plain leather belt by men. SNCOs do not wear the shoulder sash. Head-dress is usually a peaked cap for all ranks and officers, although a beret may be authorised for some regiments.

Duty dress is normally worn by all ranks and officers on barracks daily except Sundays (whereon undress would be worn for chapel or church). One set is issued to all militiamen and mustermen, and two sets for regular soldiers. Officers must acquire themselves their own items of dress. Duty dress may not be worn walking-out by regular soldiers, who must wear undress. Duty dress is commonly worn on field exercises when in Great Nortend, instead of Dress Order VI, field dress.

Evening dress is the evening-time equivalent to Dress Order I, full dress. It is only very rarely worn, generally for evening court or society occasions in public where mess dress would be inappropriately informal. Evening dress is not issued to men unless they require it, such as for non-commissioned officers of a regiment attached to an aristocratic household. Officers must acquire evening dress items themselves.

Evening dress is somewhat similar to full dress, except that an wool barathea open collar tailcoat pattern is substituted in lieu of the closed collar coat. A stiff, pleated shirt is worn with detachable wing collar and white bow tie. Waist sashes are worn inside the coat and no shoulder straps are worn by officers. Men wear a white waistcoat. The head-dress worn by most regiments is the formal cocked hat, and black breeches and black hose are worn with buckled court shoes instead of the white trousers, overalls and boots.

Mess dress is an evening order of dress worn by men and officers at evening messes or functions. It is issued to SNCOs as a matter of course; however, junior non-commissioned officers and privates will either be required to hire mess dress or wear their Dress Order I or Dress Order II uniform instead.

A mess jacket with short tails, is worn, which is an open front coat similar to a civilian white-tie tailcoat. Regimental facing colours are highly visible in mess dress on both cuffs, collars, inner lining and lapels. The jacket is coloured according to the regiment's Dress Order I, full dress colours. Black bow ties are worn.

Waist-coats are worn underneath the mess jacket, of regimental pattern. They are highly embroidered and frogged, in often gold or silver wire. Tight-fitting overalls are worn by both men and officers with mess dress, along with dress boots.

Field dress is worn in the field. The most common form for infantry soldiers is plain khaki-green, which is suitable for wear in temperate woodland and pasture environments. At its most basic level, soldiers wear a linen or flannel (depending on weather) long-sleeved shirt, woollen blouson, and woollen trousers, worn with the service cap, beret or helmet. Brown rough-out boots (polished with brown polish) with woollen socks are worn with field dress, and trousers are wrapped with short gaiters. In the cold, woollen pullovers are issued. In hotter climates, cotton drill or linen clothing may be issued.

Ward dress is the form of field dress ordered for nurses, sisters and matrons of the Royal Army Nursing Corps when in hospital wards. It consists of in summer a light blue ankle-long gown with white linen apron. In winter, a thick dark grey woollen dress is worn with apron.

Nurses wear a short linen nursing cap, whilst sisters and matrons wear a large square linen veil. A red shoulder-length tippet cape is worn over the apron and dress by matrons in ward whilst a grey tippet cape with red edging is worn by sisters. A white tippet cape is optional for nurses.

Legal dress Legal dress is the form of Dress Order I worn by judge-advocates in courts martial. It is the same as full dress except that a magistrate's judicial gown is worn over the top and an advocate's wig replaces the headdress, which is carried. Black breeches and black hose are also worn by senior legal officers with buckled shoes. No epaulettes are worn, given that they would catch on the gown.

Retrieved from "https://iiwiki.us/mediawiki/index.php?title=Uniforms_of_the_Royal_Army_(Great_Nortend)&oldid=116842"
Categories:
This page was last edited on 9 October 2019, at 11:28.
Privacy policy
About IIWiki
Disclaimers