Though it is subordinate to H.M Trade Office, the Board operates independently. The chairman of the board is the Master of the Board of Railways, presently the Rt. Hon. Sir William Gouldon, Second Lord of Trade. The position is a Cabinet level ministerial post.

Before the Collation in 1919, the railway network was operated by nearly a hundred railway companies in competition with each other. This was highly inefficient and wasteful. In 1913, the Government realised that the railways were an integral public utility necessary for the maintenance of Erbonian society which had become highly dependent on the railways. Royal acquisition was the standard method for securing such public services, as had occurred with the constabularies and fire brigades of the 18th and 19th centuries.

The Corkton Report was published in 1915 outlining a plan to completely nationalise the railways which the Sowerton Drougher government took it to the 1916 elections. The elections were won by the Scodeliers, which instead proposed an alternative form of acquisition which collated the companies into ten amalgamated corporations. Collation as the process was known, was popular with the smaller railway companies, and they were facing bankruptcy with numerous small stations, dense bureaucracy and inefficient staffing. The larger railway companies, however, were opposed to the plans until the Government agreed to grant shareholders immediate compensation to the value of double their share price, as well as a Royal warrant entitling them to demand annual payments, in perpetuity, proportionate to any profits made.

The ten railway companies to be formed were reduced to nine and in 1919, the Railway Acquisition Act was passed and assented to.

Remarkably, the process went quite smoothly as stations, locomotives and rolling stock were repainted in their new company colours. Unification failed, however, to bring about any practical changes to the operation of the railway system until 1933, when the Board of Railways introduced a unified national through-ticketing scheme, known as the Clearing House system.

Thitherto, although goods could be sent across companies by a single consignment, passengers wishing to travel across railway companies where trains were operated by different companies still needed to buy tickets for each separate leg of the journey. Under the Clearing House system, a single ticket could be used across all trains, and could be purchased at any booking office. The ticket format was also standardised in a single scheme, known as the Board of Railways Ticketing Scheme, with the same basic design across all companies. 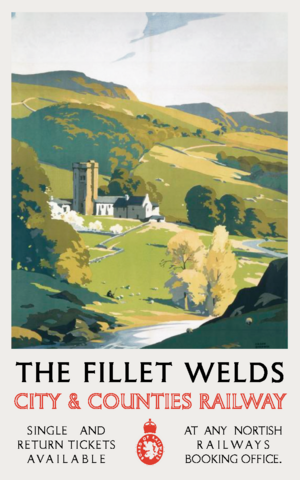 A railway poster issued by the Board of Railways in 2009.

By the 1970s, Erbonian railways had fallen behind much of the rest of the world in terms of technology. Steam remained the main form of tractive power on the railways, supplanted by electricity on some suburban lines. This required teams of cleaners and porters to continually clean stations, infrastructure, locomotives and rolling stock to maintain them in presentable order. Furthermore, infrastructure was deteriorating with a lack of funds for maintenance or replacement.

A proposal was tabled by the Board of Railways to H.M. Trade Office which proposed the introduction of diesel power to replace steam, which was inefficient and 'dirty'. The cost of the programme was expected to run to the millions of pounds and was rejected.

Instead, the Trade Office published its own report in 1974. The 'Renewal Report' proposed a number of changes which aimed to renew and rejuvenate the ageing railway network. These included:

The Renewal Report was accepted by the Cabinet, with the exception of the nationalisation of the railway network. Instead, greater inter-company harmonisation and cooperation was ordered, starting with a greater prominence placed on the national Board of Railways name. The traditional 'Bramley badge' of the Board of Railways, with the standard crown, lion and oval, was to be used in conjunction thenceforth with the operating company's name and badges.

A significant change was the introduction of the Board of Railways standard designs for railway coaches and rolling stock in 1977, to replace old, worn-out and potentially unsafe stock which mostly dated back to the early 20th century. The new carriage designs accommodated three classes of travel and were available in compartment, corridor and saloon designs.

The actual operation of the railways is the responsibility of nine subsidiary companies, majority owned by the Crown and known as railway companies. These are the :

Each company is legally a distinct entity, and has a wide discretion as to how passenger, goods, minerals and other traffic is carried. They are all, however, subject to Orders of the Board, which implement various government and industry policies.

Passenger services are available at most railway stations on the network, save for a small number of industrial and goods stations. Under the Railways Act, railway companies are obliged to provide at least a twice-weekly service at all passenger stations. Passenger trains are of three main sorts :

Other trains include specials and excursion trains which run for special occasions.

Passenger services are available on most lines in three general classes : first class, second class and third class. A station must be served at least twice-weekly by a train with least one compartment in each class. Other trains may or may not have every class of travel; however, most trains excepting labourers', luxury and special trains, have all three classes of travel.

A ticket will not guarantee a seat unless the passenger pays for reservation of a seat on a particular train. Reservation must occur at least an hour before the train is due to begin its journey, to ensure that it can be processed in time.

Livestock is carried by the railways in special cattle vans, livestock vans and horse boxes. Not all stations handle livestock traffic, and specifically most suburban stations have limited facilities for anything other than horses.

Goods services form a very important part of railway company operations. As common carriers, railway companies are obliged to carry 'all manner of goods' subject to several common-sense restrictions. Most goods traffic is waggon-load which comprises over two thirds of all goods traffic revenue. Container traffic is very limited, and containers generally are unpacked and unpacked manually at ports, rather than being transported as-is. Nearly half of all goods is less-than-waggon-load merchandise, fresh produce and sundry goods. The rest is bulk ballast, ore, coal, sand, gravel &c.

Mail is another important item carried by the railways on behalf of the General Post Office. Mail is predominantly carried by rail for local distribution and delivery. Special travelling post offices along main lines allow for the collection, sorting and delivery of mail at high speed, allowing for over-night delivery across most of the country. Mail is also carried on ordinary stopping or express services.

Retrieved from "https://iiwiki.us/mediawiki/index.php?title=Board_of_Railways&oldid=122226"
Categories:
Hidden category:
This page was last edited on 25 October 2019, at 07:29.
Privacy policy
About IIWiki
Disclaimers