Ottila Möller (née Schnyder, born 15 February 1973) is an Alslandic politician and civil servant who has served as Premier of Alsland since April 2020 until September 2022.

Ottila Möller was born on 15 February 1973 in Werdau in Garz, Alsland and was the only child of Per Schnyder who was an MEP from 1989 until his death in 2013 and his wife Tanja Jung. In 1991, she attended Glauchau University and graduated in 1996 with a degree in Public Policy. From 1996 until 2002 she lived and worked in Verlois before returning to Alsland. She became Mayor of Sachsenscheid in 2008. She helped found the Progressive Alliance after it split from the Workers' Party.

In 2014 she became the first female Secretary of Finance in Alsland after being appointed by Liekele Ykema. Möller became the leader of Progressive Holsteen in 2016. After Ykema announced his resignation as Premier in 2018 she was initially the frontrunner to succeed him but ruled herself out and instead backed Hepke Veltman who succeeded Ykema as Premier. Following the 2020 Presidential election which Veltman won Möller became the coalition's agreed candidate for Premier, her government was formed on 25 April 2020. Möller became the first social-democrat to hold the office of Premier in Alsland since Bonne Zijlstra and was the first woman and first member of the Progressive Alliance to hold the position. As Premier she has oversaw the expansion of the Alsrail network, the beginning of the complete phasing out of nuclear energy and the 2021 Yndyk train bombing which was the worst terrorist attack committed in Alsland.

Möller resigned after the fallout of the SYFA spying scandal.

She attended Glauchau University and graduated in 1996 with a degree in Public Policy where she graduated in 1995. In 1996 Möller moved to Verlois where she worked for a Gaullican insurance company. In 2002 Möller returned to Alsland and worked as an accountant in Yndyk for several years.

In 2008 Möller became Mayor of Sachsenscheid after she defeated the incumbent Sotirian Schoenauer who had held the position for 20 years. Upon becoming mayor she opposed austerity policies implemented in response to the financial crisis and directed local authorities to increase funding for food banks. She also petitioned the government to grant extra funding to local authorities to handle the financial crisis. In 2013 she and 100 other mayors from Holsteen declared their opposition to Holsaten independence in response to the election of a separatist government in Holsteen. 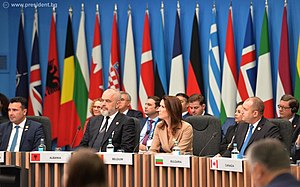 Ottila Möller at a meeting of EC Finance Ministers in 2016.

After the 2014 legislative election then Secretary of Finance Roland Kreutzwald retired from politics. Shortly after this Progressive Holsteen recommended Möller as his replacement, on 13 October the Folkssenaat confirmed her appointment to the position. She became the first female Secretary of Finance in Alslandic history. In 2016 Möller chaired several meetings of EC finance ministers where she endorsed granting the EC further budgetary powers. In 2018 her budget was voted down by the Folkssenaat shortly before the 2018 election which led to intense media scrutiny on if she would be reappointed to the position following the election. Liekele Ykema was forced to defend Möller's position during a leaders debate prior to the election.

After the election Ykema's coalition partner Civic Initiative refused to enter negotiations with him leading to his resignation shortly afterwards. As a result Möller was named as the most likely candidate to succeed Ykema by Hjoed and ANS. She was proposed as a candidate for Premier by Progressive Alliance and the Humanist Sotirian Union, she ruled herself out as a candidate for Premier and instead recommended Minister-President of Yndyk Hepke Veltman to the coalition at a meeting. Veltman's cabinet was confirmed in December 2018 where Möller retained her position.

In 2019 Veltman announced his intention to run for President of Alsland and resign if he was successful. It was agreed by a meeting of coalition party leaders shortly after this that Möller would succeed him if he was successful. After Veltman narrowly won the election he resigned as Premier and Möller was proposed to the Folkssenaat as his successor. Her government was confirmed by the Folkssenaat on 25 April 2020, the same day Veltman assumed the Presidency.

After the 2021 Yndyk train bombing Möller announced an inquiry into the attack and the creation of a new anti-terrorism department. The Folkssenaat passed a strict anti-terrorism bill which some critics said increased government surveillance.

Möller was criticised in August 2021 for endorsing Rupert van Bleiswijk in the 2021 Hennish federal election but not Armela Viram Srimathi in the 2021 Scovernois federal election like many other ASE politicians. Möller was accused of having a racial bias against Armela Viram Srimathi by members of the opposition. Following the installation of Nesby's Second Cabinet Möller was the first Euclean Head of Government to congratulate her. After this a leaked memo was sent to members of the cabinet expressly forbidding endorsing candidates in foreign elections.

In December 2021 Möller announced a goal to make Alsland carbon neutral by 2050. Shortly after this the Folkssenaat introduced a new carbon tax, this was heavily criticised by the opposition. The plan was also criticised by the Greens who said the plan did not go far enough to tackling climate change.

On 26 January 2022, an opinion poll showed 58% of Alslanders disapproved of Möller's government, this led to instability within the coalition prior to the 2022 Alslandic legislative election. She announced her resignation on 2 February and was reinstalled by the Folkssenaat on 4 February, her resignation was seen as an attempt to unify the coalition against an early election or the opposition being able to field a candidate for Premier. Since her resignation and subsequent reinstallation as Premier her approval rating has risen.

Möller self-identifies as a centrist as well as a progressive and a Euclofederalist. In the past she has identified herself as a professional socialist. In 2022 Möller endorsed lowering the Federal voting age to 16 and legalising recreational marijuana use.

Möller is against non-EC immigration to Alsland and the 2018 Progressive Alliance manifesto says it will take steps to reduce non-EC immigration into Alsland "significantly". Despite this Möller claims that Kirenia - which is not an EC member - is unaffected by this and is against cutting immigration from Kirenia. She is a supporter of the special relationship between Alsland and Kirenia. The 2022 Progressive Alliance manifesto removed their prior immigration policy. The Alliance and Möller now support allowing high-skilled immigration and pledged to support refugees who arrive in Alsland through legal means.

Möller is married to Niels Möller. Möller is a non-practicing Catholic and has previously said she doubts her religious beliefs on ocassion. Despite being eligible to live in the official residence of the Premier, Möller lives at her own home in in Garz and commutes using public transport. Niels Möller is a member of the Garz Assembly. She and her husband are both skydiving enthusiasts which has become a regular hobby after Ottila partook in a skydiving event for a charity in 2021.