Federal elections were held in Hennehouwe on 3 September 2021 to elect all 180 members of the 28th Second Chamber.

After several months of unofficial campaigning, the election was formally called by Premier Rupert van Bleiswijk on 21 July 2021, following assent by Stadtholder Adriaan Wilhelm Paulus, with the official campaign kicking off in earnest. Major issues that featured prominently during the election campaign included the debate over the Buy Euclean initiative, trade, employment, integration of immigrants and the financing of public servcies. The campaign was also marked by a number of incidents and controversies, most notably calls for a boycott of the election by members of the Zorasani parliament and the arrest of radical Irfani cleric Abdul Jabbaar el-Rasheed, which spawned violent protests in s'Holle and other cities.

The Socialist Labour Party (SAP) remained the largest party albeit with a reduced number of seats and vote share, winning 46 seats and 21.0% of the vote, and won a plurality of the vote in Flamia, Grotevlakte, s'Holle and Zilverzee. The National People's Party finished in second place with 39 seats, an increase of three from the last election, with 18.7% of the vote, and won a plurality in the regions of Geeland, Lower Stegeren and Oudkessel-Witburg. The Progressive Democratic Party (VDP) lost nine seats, finishing with 31 seats and 14.5% of votes cast, winning a plurality only in the northern region of Reekland. The combined losses of the SAP and VDP made the re-election of the incumbent government, which was already without a parliamentary majority, virtually impossible.

The Green Party won its best ever result at the federal level, winning 19 seats in total, an increase of eight, on 10.2% of the vote. However, the biggest winners of the election were the populist Heart of Hennehouwe (HvH), founded only eight months prior to the elections by businessman and former television personality Pieter Veer. The party won 16 seats and 8.6% of the national vote, defying all opinion poll projections and expectations, and winning narrow plurality in Veer's home state of Upper Stegeren. The success of the HvH has been attributed to its focus on endorsing a "buying Hennish" economic policy, a strong social media campaign and a lack of association with the more radical far-right. In contrast, the Patriot's March (MdP) lost half of its seats to finish with eight, and a vote share of 6.0%, its worst since 2010.

Other small partes had mixed fortunes. The Left won six seats, a loss of one, on a reduced vote share of 4.8%. The People's Party for Sotirian Democracy (VSD) and the Party for the Petois (PP) also won six seats each, remaining unchanged from the previous election. The Agrarian–Farmer's Party (ABP) won just two seats, its worst result since 1991. Vox entered the Second Chamber for the first time ever with a single seat gain in s'Holle, whilst LIVE lost all of its seats.

Turnout for this election stood at 81.5%, the highest in fifteen years, and up over two points from the previous election, with a record 7.98 million votes were cast

The outcome of the previous federal election, held in 2017, resulted in the imcumbent centre-right coalition, led by the National People's Party (NVP), being replaced by a "purple" grand coalition of the Socialist Labour Party (SAP) and the Progressive Democratic Party (VDP). The leader of the SAP, Rupert van Bleiswijk, became Premier, replacing Michiel Hagan of the NVP. The coalition held 89 of the 180 seats in the Second Chamber, two seats short of an overall majority. As a result, confidence and supply arrangements with the Agrarian–Farmer's Party (ABP) and the Party for the Petois (PP) were necessary to ensure the long-term viability of the government.

Of the ten parties represented in the outgoing Second Chamber, six have different leaders going into the 2021 election than they had in the previous election. Dirk Klaver was initially named the leader of the NVP in November 2017, but resigned in August 2019 following a leadership challange in the wake of poor election results, including the Euclean Parliament elections held earlier that year. He was replaced by current leader Fabian van Aitzema in September 2019. The Greens continued their policy of naming one man and one woman as co-leaders, electing Bart van Veen and Lise Xi to the joint position in March 2019. The leadership of The Left is renewed every year at its party conference, with Dirk Smolders being elected every year since 2018. Margje Westerveld and Sharon Visscher were elected as leaders of the People's Party for Sotirian Democracy (VSD) and ABP respectively – the first women to hold both roles. Sam Tarokh led the LIVE party from 2020 until July 2021, when he was ousted during party infighting. Tarokh subsequently resigned from the party and confirmed he would not run for the party in the upcoming election. On 19 July 2021, two days before the beginning of the campaign, the party named Elise Dumont Aguas as its new leader.

Article 42.2 of the Basic Law (Algemene Wet) states that a new Second Chamber shall be elected no later than 28 days after the fourth anniversary of the first sitting of the current Second Chamber, excluding public holidays, and that the date of the election must be held no less than 28 days but no more than 56 days after the dissolution of the pevious Chamber. Article 42.3 states that the first sitting of the new Chamber must occur within 28 days after the election date, excluding public holidays.

The Electoral Law of 2000 legislates for fixed-term election dates, automatically scheduling an election for the first Friday of September four years after the previous election, or the second Friday of September if the former falls on a public holiday. An election prior to the fixed date can be called for in the Chamber via a two-thirds supermajority vote. Under the Law, the election was automatically scheduled for 3 September 2021.

The 180 members of the Second Chamber are elected by open list proportional representation in 10 multi-member constituencies corresponding to the 10 regions of Hennehouwe, with seats allocated according to the Berger method.

There is no electoral threshold, meaning the effective threshold depends on the size of the region: in the smallest region, Oudkessel-Witburg (7 seats), the effective threshold is around 10%, whilst in the largest region, Flamia (40 seats), it is closer to 2-2.5%. Seats are allocated to the regions in proportion to population, with a review of seat distribution carried out one year after the last census. The allocation of seats remains unchanged from the 2017 election.

For an outright majority in the Chamber, a party (or coalition of parties) must have at least 91 seats. Due to the nature of Hennehouwe's multi-party system, it is rare for any one party to singlehandedly obtain a parliamentary majority, and thus coalitions and/or agreements between different parties is necessary.

Electors vote by casting a preference for a personal candidate from their chosen list, rather than voting for a party list outright. If a candidate receives a quota of either 20% of 1/xth of votes (x equalling the number of seats in that region) or 33% of the total votes for their own list, they will bypass the rest of the list in the allocation of seats regardless of their placement on the electoral list. If multiple candidates from a list pass this threshold, their ordering is determined based on the number of votes received. Otherwise, the remaining seats are allocated according to the placement of candidates on the list. In regions with more than 24 seats, parties are limited to a maximum number of candidates equating to two-thirds the total number of seats. Due to the current distribution of seats, only Flamia and Lower Stegeren are affected by this change. In all other regions, the maximum number of candidates on a list is the total number of seats.

On 12 August 2021, the Electoral Commission announced that 31 parties had met the requirements to participate in the elections in at least one region. These include all ten parties represented in the outgoing legislature, as well as 21 other lists. Thirteen parties will contest all ten regions.

The following parties do not currently have any seats in the legislature, but are confirmed to be competing in the election. 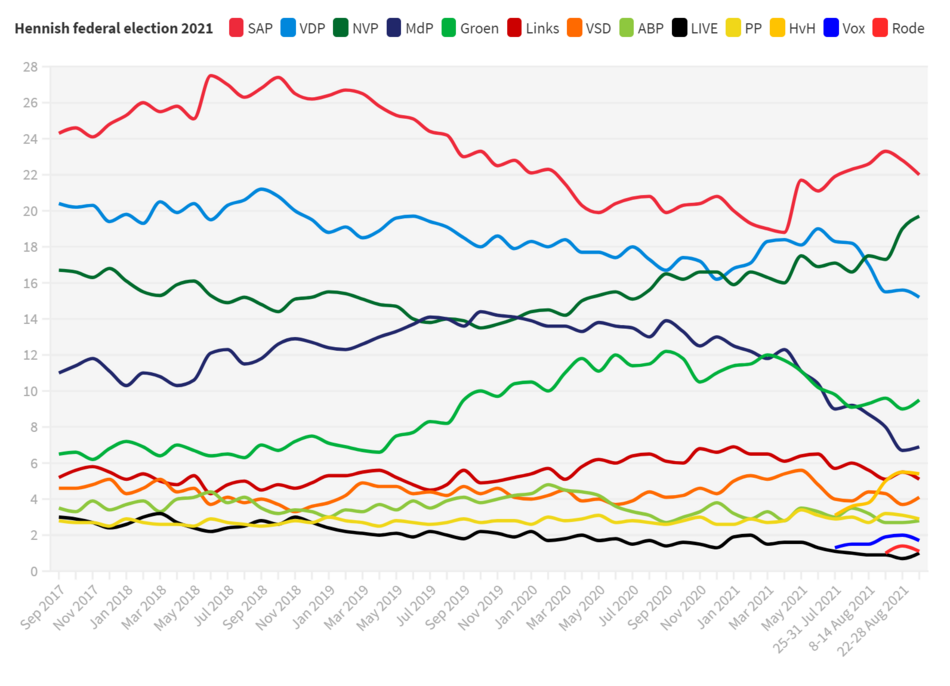 Graphical summary of the average of polls conducted for the federal election since September 2017.

Preliminary results were finalised on the morning of 4 September, and the official result was published on 8 September.