The political divisions of Sydalon are based on the original grants following the Crusades. The 1919 constitution established three levels of territorial organization under the Crown: municipalities (tertiary), province (secondary), and domains (primary).

Sydalon is not a federation, but a decentralized unitary state. The only sovereign entity is the Crown, which is represented by Her Majesty's Government, and localities by a series of asymmetrically devolved administrations, which exercise authority based on the limits implemented in the 1919 constitution, and their governing statutes. There are 10 domains: 2 principalities; 4 duchies, 3 counties. The Royal Domain and Petra, while administrative divisions, are not considered first level domains, and maintain a special status. Though each domain's competencies vary, all have similar lord (or crown representative)-parliamentary structure. 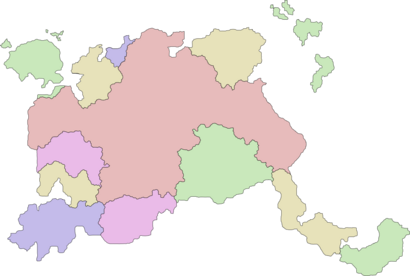 Domains are the first level political and administrative division of Sydalon, created in their current form by the 1919 Constitution. Domains are asymmetrically devolved communities with rights to self-govern in accordance with their governing statutes, contracts, and the baseline powers granted by 1919 Constitution. It can be considered a de facto federal system. Domains may pass their own statutory law for the governmental competencies which they are granted control over. This scope varies, though each is represented by a hereditary Lord (of varying rank, but either: Prince, Duke or Count), and a representative assembly. However in the case of Royal Domains, the Crown is represented by an appointed Steward or Seneschal.

All domains, except for the Royal Domain, are governed under the same constitutional parliamentary framework:

Domains are responsible for their own regional elections; despite this, all of which introduced legislative elections earlier than the national government. Assemblies and executive council names vary from domain to domain, often corresponding to the historical crown council or local assembly. Since 2005, domain executive councils are required to receive support from the the local assembly. Often times, this leads to members of the local executive council also serving in the local assembly, though this is not a requirement in all domains. The historical lord of all domains, except the Royal Domain, serves as the chief subnational executive, a Crown representative sits on the domain council. In addition, all domain executives hold an ex offico seat on the High Court.

Legal competencies can be divided into three categories: crown competencies, domain competencies, and shared competencies. The Crown holds exclusive competency over foreign relations, defense and military, commercial, criminal, civil, and labor statutory law, customs, general finances and state debt, public health, basic legislation, and general coordination. Domain competencies include the ability to determine it's own budget, education (including universities), health and healthcare, including other social services, and development. Policing is considered a shared competency. As devolution is asymmetrical in nature, actual legal competencies vary from domain to domain. For example, the Principality of Montgisard has a separate civil code and coast guard; and border domains, including Hayan, Melfi, and Tiberias, have separate border agencies and may raise militias to supplement royal officers. All domains have their own police and security forces. 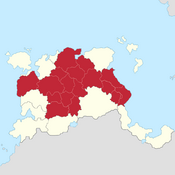 Boundaries of the Royal Domain (red) have remained the same since 1919.

The Royal Domain is the collection of territories that are directly held and administered by the Monarch and the central government. The Royal Domain, which slightly differs from the Crown Lands, are the lands within Sydalon that fell within the Crown's direct control since the founding of the Kingdom following the First Crusade. The designation was changed in the 1919 constitution, where the original crown lands, or directly held fiefdoms or former domains, were reorganized into the Royal Domain, which is now wholly separate from the modern usage of crown lands, which is public land throughout the entirety of Sydalon to be used for the benefit of the Crown and county.

The Royal Domain consists of 18 territories which came under direct Crown control through inheritance, revocation, or other mergers. It is administered by the Crown and central government of Sydalon similar to a unitary state, as the Royal Domain has no separate administrative capacities, or governmental organs as the non-royal domains, such as lack of regional assembly, judiciary or executive. The Royal Domain has a historical, and nominal figurehead in the form of the Royal Warden, who traditionally oversaw distant lands for the Crown, or a Duke, which is typically a younger son of the monarch and is appointed lands, incomes, and specific rights in his respective duchy. Today, the office of Royal Warden lacks any actual administrative role in the Royal Domain. The current Royal Warden is Michael, Prince Consort.

Though directly governed by the central government, the Royal Domain is divided into 50 provinces. Each province is governed by a Crown appointed governor and elected legislature of anywhere from 30 to 100 elected members. Provinces in the Royal Domain hold authority over local education (not including public universities), transportation and roads, social services (inc. fire, police, etc.), libraries, and waste collection and disposal. These competencies are universal across provinces in the Royal Domain, established under Royal Order.

Provinces are the second level administrative and territorial division of Sydalon. This division sees the greatest variation in competencies, and widely differ from domain to domain. Historically, provinces were equal to the many lordships holding feudatories beneath the Ancient Peers. However, it is consistent across domains that provinces are a grouping of municipalities and are governed by a council or hereditary lord.