In Amalfitan history, the Year of Turmoil (Amalfitan: Annus Tumultus) refers to the year 1642, when a series of coups and rebellions plunged the Amalfitan Empire into chaos for ten months. It began with the Prataian Crisis, when princeps Prataius accused the senators from Talox of Some Kind of Treason before the entire Senate. In response to the accusation, the Talocians stormed out of the Curia. Prataius? was granted an army to pursue them and subdue Talox, which barred its gates before the principal army. While Prataius? was laying siege to Talox, his co-princeps revealed to the Senate that the accusations were false and merely a cover for Prataius?'s power grab. Co-princeps Man was granted an army to subdue Prataius.

The two lads duked it out somewhere and maybe died.

In early March, another coup murderised the Senate in the Storming of the Curia. Almost two thirds of the senators were murdered, but the conspirators were soon identified and they abandoned their planned coup. Instead, they turned to Ecirius Taranus Roscii, a prominent general who was in charge of the city of Casartium. Roscii proclaimed himself king and spent a week gathering supporters before he marched on Trasimene. He was, however, killed during the dramatic Battle of the Field of Black Roses, and his followers scattered two days later when the news of his death broke.

The beginning of the Year of Turmoil came on Tuesday 18 January when, during a session of the Senate in Trasimene, Princeps Prataius denounced a large number of Talocian nobles and accused them of a conspiracy against the republic. The accusations were flatly denied and a heated debate raged for several hours before the session was suspended until the following day. Wednesday's debate opened as normal, with a discussion of toll roads in Suvasus, but was commandeered by Prataius within half an hour. A senator from Lisaris, Nixius, confessed to his complicity in the conspiracy and read out a list of other involved conspirators, including more than sixty senators. Prataius passionately called for their arrest and execution. The Senate dissolved into uproar as those named by Nixius fled the city.

Representatives were sent by the Senate to Talox on Thursday, but they found the gates of the city barred against them. In response, Prataius took command of a senatorial army and marched to subdue the Talocian rebels, leaving Trasimene on Saturday. On Sunday, his counterpart princeps Moravus denounced Prataius as a traitor himself, laying out an argument that demonstrated the falsehood of Prataius' accusations. Senator Nixius publicly retracted his confession the next day and insisted that he had only made it after intimidation by Prataius. The Senate then granted Moravus command of an army to pursue Prataius and return him to Trasimene.

By Tuesday the 25th, Amalfi was in a state of civil war as both principes commanded armies against each other. Prataius laid siege to Talox on the 26th. Over the next two days, the Senate discussed his impeachment and stripped him of his position and titles that Friday. Moravus encircled Prataius on the Saturday. 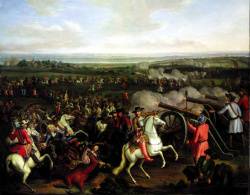 The Battle of the Field of Black Roses saw the monarchists achieve a major victory but at the cost of their king
Main article: Twelve Days' Monarchy

Main article: Insurrection of the Colonies
Retrieved from "https://iiwiki.us/mediawiki/index.php?title=Year_of_Turmoil&oldid=14148"
Categories:
This page was last edited on 31 January 2019, at 14:20.
Privacy policy
About IIWiki
Disclaimers