The Confederation of Amalphia was a confederation formed by the Accords of Lisaris in 834 in the wake of the War of Ten Cities. It was the immediate successor to both the Triple Federation and the Carsine League and intended to provide unity and stability between what had been previously been two warring alliances. The confederation was a hitherto unprecedented attempt at uniting a number of city states with very different political structures. Each member state was obliged to appoint a set number of representatives to a senate in Trasimene. It was formally dissolved in 1371 and replaced with the Republic of Amalfi which consolidated and centralised the power and mechanisms of government.

The confederation was initially formed at the spurring of Trasiminian rhetorician Runius Sparinus Votex, who warned the leaders of the Triple Federation that a long-term peace would be impossible even if the Carsine League, which had just been defeated in the War of Ten Cities, was disbanded. Votex advocated a united Amalphian Plain, and argued that a confederation would eventually bring about Trasiminian political dominance which its military could not.

The confederation endured for five centuries before being reorganised under the republic, and its membership expanded during this time. Its founding members, as dictated by the Accords of Lisaris, are listed below:

Notably, the city of Accia was excluded from the confederation on its establishment. Devastated economically and politically by the War of Ten Cities, Accia was already embroiled in a conflict with neighbouring Coracasa when the Accords were being drawn up, and the negotiators opted to exclude the city and so avoid another war. Accia would accede to the confederation in 855, Coracasa in 921. 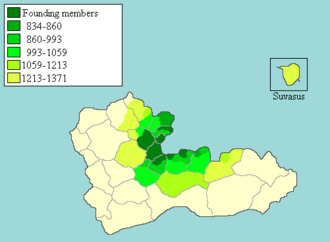 Map showing the growth of the Confederation by period of accession

At the time of its dissolution, the confederation had acquired the following new members:

* Castra Velania and Mons Arvacis, initially military encampments, were each granted a charter and voting rights in the Senate in the given years.
** Portaveriana was an exclave of Lisaris prior to the Quay Revolt of 1020.