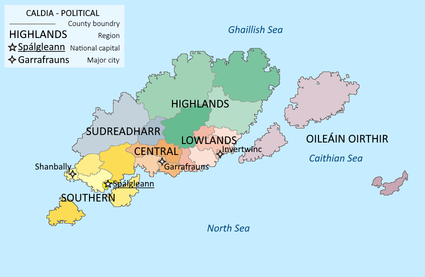 A geopolitical map of Caldia, showing the 26 contaetha in their respective regions.

The counties of Caldia (Ghaillish: contaetha na Ghlítteacht) are sub-national divisions that are used to geographically mark areas of local government. These land divisions were first formed following the arrival of the Verique in imitation of the counties then in use in the Kingdom of Embria. In Embria, counties were used as units of local government. The main function of the county was to impose royal control in the areas of taxation, security, and the administration of justice at both local and regional levels. Through the concept of county corporate several cities were to a status which was deemed to be no less important than the existing counties in which they lay, such as Scariff and Clyte. This double control mechanism of 25 counties plus 5 counties corporate remained unchanged for a little over two centuries until the early 19th century, since then counties have been adapted and in some cases divided by legislation to meet new administrative and political requirements. Over time the counties home to major settlements such as Spálgleann would be absorbed by the municipality entirely. Likewise, in the case of Garrafrauns and Invertwinc lands from their original counties were distributed to neighboring counties following their reorganization into a municipality based county.

Today, Caldia is made up of 26 counties. The counties have a permanent constitutional status. Under the Caldish Constitution, all 26 counties are equal in status. Each county is governed as a such, with the exceptions of Spálgleann, Garrafrauns, Invertwinc, and Shanbally, all of which are both a municipality and a county.

Caldia has 26 counties, the majority of which use the County Commission model. However, there have been three other types of counties in Caldia. They are counties corporate, metropolitan counties, and autonomous counties.

Caldia has four metropolitan counties: Spálgleann, Garrafrauns, Invertwinc, and Shanbally. A metropolitan county is a city that has the same rights as a county. It is similar to a county corporate, however it is both de jure and de facto self-governing. Initially, the only city that was also a county was Spálgleann and this was not by design. Urbanization starting after Caldia began to industrialize saw the city's effective borders envelope the entirety of the County of Spálgleann. Overtime, many of the other municipalities in the county voted to become a part of the City of Spálgleann. The government expanded upon this model with the Instrument for Governance of 1965, which established Garrafrauns, Invertwinc, and Shanbally as metropolitan counties. Many of these cities have populations that are higher than most counties. The government determined separating these highly-populated municipalities from counties would allow for more efficient and representative governance at a county level.

Currently, the only autonomous county in Caldia is Caithia, which was seperated from Oileáin Oirthir in 1978 via the Caithian Home Rule Bill. An autonomous county has similar rights to a regular county, but is granted a greater level of autonomy, with the devolved government and legislature having the power to legislate in all areas not reserved by the Tionól. In this respect, autonomous counties have far expanded duties than their commission counterparts, and are generally considered closer to devolved rather than local government. Another key difference between autonomous and regular counties is that autonomous counties are granted protection under Caldish law, meaning that they cannot be altered without the approval of their devolved administration.

The four municipalities that are also counties, Spálgleann, Garrafrauns, Invertwinc, and Shanbally, do not follow the County Council model the rest of the counties do. The county executive is the Laird or Lady Mayor and the legislature is the city council. Likewise, Caithia is an autonomous county and is governed in accordance with the Caithian Home Rule Act of 1978. The county executive is the Chief Minister and the county legislature is the Cynulliad.

For the single-member districts, Ní Dochartaigh method of single transferable vote or first-past-the-post is used. This depends on how districts, known as wards, are established by the individual county. A county will have as many single-member districts as it will councilors and each district contains an approximately equal population. Some counties have multi-member constituencies with at least two members. These districts are not always equal in population, as a county with seven councilors may have a ward with three members and another with four. The Ní Dochartaigh method is employed for all of these multi-member districts.

Some counties elect their councilors at-large, meaning they represent the whole of the county and not a specific electoral district. These counties use the Ní Dochartaigh method or open list proportional representation. It is most common in counties with councils with more than eleven members.

If a special election takes place and there is one seat at stake, first-past-the-post is used regardless of the county's regular electoral procedures. Counties that use the Ní Dochartaigh method have at times criticized this practice.

The diversity in electoral systems has been criticized as confusing and inefficient. However, among the counties themselves and national governments there has been little desire to standardize the system. The constitution gives counties the right to determine how their councils are selected.

Regular county elections are held every five years nationwide. The last election was on 12 June 2015.

Counties are responsible for supervising local state administration that is not otherwise assigned to government agencies. The elected county commission oversees the governance and bureaucratic affairs of the county, primarily in regards to public transportation, waste services, education, and culture. Counties are also responsible for fire and ambulance services and were previously responsible for police services.

County commissions are responsible for working with the elected health boards and implementing their resolutions.

There are several government agencies that are organized on a county basis. Some of these agencies include the national police service, employment and social services, and public assistance services.

County governments also coordinate their political goals with the national government, often through the Ministry of Urban Affairs and Municipal Relations.

With county codes, which have been official since 1965.

Caldia's county system has been criticized as outdated and inefficient. Critics of the system have begun to advocate for a transition to a regional model for subdivisions. They argue this would bring the country more in line with subdivisions seen elsewhere in the Euclean Community. Some also claim that consolidating counties into regions would save money, as fewer sub-national governments would be operating and providing public services. These new, consolidated subdivisions would reflect Caldia's geographic and cultural regions.

Supporters of the county system argue that it allows for more direct, representative government and for public services to better serve the people who use them. There are some concerns that the consolidation of counties into regions would allow for the metropolitan counties to dominate the new subdivisions, taking resources away from other areas. This is especially the case for Southern Caldia, which is home to both Spálgleann and Shanbally.

Retrieved from "https://iiwiki.us/mediawiki/index.php?title=Counties_of_Caldia&oldid=237056"
Categories:
This page was last edited on 12 August 2020, at 01:49.
Privacy policy
About IIWiki
Disclaimers