The word means "chief" or "leader" in the Ghaillish language. The earliest known use of the term is from a 5th- or 6th-century ogham inscription in both the Tenic languages. Internationally, the office is colloquially referred to as the premier or prime minister of Caldia. Taoiseach is the official title in Ghaillish, Gaullican, and Estmerish. It is not used for the heads of government for other countries. Instead, prime ministers are referred to in Ghaillish as Príomh Aire and the Ghaillish language uses premier as a Gaullican-loanword for premiers.

Under the Constitution of Caldia, the Taoiseach is nominated by a simple majority of Comhthionól Náisiúnta from among its members. This means a Taoiseach must receive the support of 200 TCs in order to be nominated. Following a nomination, he or she is then formally appointed to office by the monarch. The monarch is required to appoint whomever the Comhthionól designates without the option of declining appointment.

If the Taoiseach loses the support of a majority in Comhthionól Náisiúnta, he or she is not automatically removed from office. If a motion of no confidence in the Taoiseach is passed, he or she will be removed from office but the current government will remain in place. The Taoiseach's deputy, the Tánaiste, then assumes the powers of the position until the governing party names a new leader or until the legislative term ends. This happens infrequently, as it does not require a new election. Most often, a motion of no confidence in the Government is passed. If such a motion is passed, the Taoiseach is compelled to either resign or persuade the monarch to dissolve the Comhthionól and allow for new elections. The monarch may refuse to grant a dissolution, effectively forcing the Taoiseach to remain in office and form a care-taker government until the legislative term ends. To date, no monarch has exercised this prerogative despite it being permitted under the constitution. Additionally, the failure of a vote of confidence in the Comhthionól Náisiúnta may result in a Taoiseach's resignation or the dissolution of the sitting Comhthionól.

When a Taoiseach submits his or her resignation, the incumbent officeholder continues to carry out the powers of the office until the nomination of a successor by the Comhthionól Náisiúnta.

In addition to, the Taoiseach is also given the constitutional power to directly appoint fifteen members of the Seanad.

Taoisigh are also members of the Council of State, where they serve from their ascension to the office until their death.

The word taoiseach means "chief" or "leader" in Ghaillish. Historically, it was the name given to leaders of clans. The title was also used by early rulers of the Kingdom of Ghailles who were referred to as the Great Chief. When the Kingdom of Caldia was established, the title was granted to the monarch's steward. Royal stewards were known as the Chief of the King or Chief of the Queen. The title was replaced by the position of Laird Chancellor during the 13th century. When the position was established in 1857, taoiseach was used to mean "Chief of the Government". The plural of taoiseach is taoisigh.

The position of Taoiseach was created in 1857 under the Instrument for Governance Act of 1857. Following the Silent Revolution and the demand for greater political representation, the creation of the Comhthionól Náisiúnta would result in the demand for the post. King Elton I and the Seanad both approved of its creation. 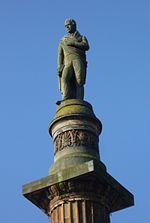 A statue of Dónall Ó Conaill, the first Taoiseach, in his native Shanbally.

The creation of the office would remove considerable authority from the Seanad, and as such made the principal house of the Tionól.

The first Taoiseach was Dónall Ó Conaill, a former Laird Chancellor, former senator and prominent reformer. He was a principal leader of the Silent Revolution. Ó Conaill was a member of and the leader of the Caldish Democrats, the party which heavily campaigned for the creation of a more democratized house. Ó Conaill would serve two terms as Taoiseach, with the first lasting from 1857-1862 and the second from 1867-1872.

Since the office's creation, there have been thirty-one Taoisigh from four political parties. All but eight Taoisigh have served for the full duration of their five-year terms. Conán Ó Faoláin is the only Taoiseach to have died while in office while Liam O'Mathuna failed to defeat a motion of no confidence. Taoisigh Brigid O'Reilly and Rory Mac Ailín, and Humphrey Dumfries are the only Taoisigh who have both been in power during snap election and to have had their parties defeated in a snap election. Niamh Nic Uilliam and Frank Casarnach were dismissed from their office following intervention from the monarch. Alexis Walker resigned before the 2017 Caldish general election. Jimmy O'Reilly resigned from the office after a diplomatic scandal in 2018. Séamus Ó Faoláin held the office for only three months before being defeated in the 2002 election.

The Instrument for Governance Act of 1965 removed virtually all powers from the Seanad. As a result, the power of the Taoiseach increased significantly as they no longer had to cooperate with the Cathaoirleach to ensure their legislation would pass the Seanad. The need for reform arose following the Government Crisis of 1965 in which the majority of elected Seanad seats were held by the Liberty Party. As a result the Cathaoirleach, Dónal Ó Loingsigh, was a member of the Liberty Party. He used his seat to delay major reforms pursued by Taoiseach Mary O'Neill by refusing to put them up for a vote. Instead of calling for a snap election or waiting for the 1966 Seanad election, O'Neill instead pushed to strip the upper house of the bulk of its powers. The Instrument for Governance Act of 1965 was passed with a two-thirds super majority after negotiations between the parties sitting in the Comhthionól. After her reforms were implemented, the Taoiseach was granted the power to appoint eleven senators, an increase from the five previously permitted. This is done in order to ensure the government has a majority in the Seanad, which now only has the powers to review and delay legislation.

The family of the Taoiseach has no official title or role. However, family members are often identified as members of the Dara Teaghlaigh (Second Family) in the Caldish press. This is due to their secondary status to the Royal Family. The phrase Dara Teaghlaigh first became popular in the 1990s and has since remained.

The official residence of the Taoiseach, the Loveland House. The residence is located on the Royal Mile in Spálgleann.