Established in 1533 by Caldish settlers, it is one of the oldest settlements in the Asterias. Over the centuries, control of the city passed through Caldia, Geatland, and Estmere, with interludes of occupation by other countries, such as Gaullica during the Gilded Wars and the Great War.

It is today the main economic center of the country, with it being home to the country's financial sector, and being the main center of tourism in Imagua and the Assimas. Due to its size, it is also a major cultural centre, with only Etrurian language media being based outside of Cuanstad.

The first part, Cuan, comes from the Caldish word cuan, meaning harbour, as it is located in the Cuanstad Harbour. The second part, stad, is the Geatish word for city or town, stad, which indicates that the name was given by the Geats after taking the island from Caldia.

Prior to the conquest of the town by Geatland, the settlement was known in Caldish as Baile Naomh Ellen, or Town of Saint Ellen.

Colloquially, it is called Stad in Western Imaguan Creole, or Town in Estmerish.

Due to its position on the mouth of the Glen River, and its location on the Cuanstad Harbour, the site of what would become Cuanstad was a major site for native Imaguan settlement.

Archaeologists have noted the presence of human habitation on present-day Cuanstad, with humans believing to have inhabited the area for around five thousand years.

When the first Caldian explorer landed on present-day Cuanstad, he wrote that:

"As we approach the end of the harbour and the start of the river, we witness the sight of native villages and native peoples. While it is impossible to make a direct estimate from these waters, I reckon that there are at least a thousand people around the coast."

Early colonial records did note that the area was well cultivated, with potatoes being the most common staple crop in the area, while there were estimated to be seven native villages within the general area. 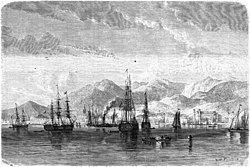 In 1533, Caldian settlers established a settlement on the mouth of the Glen River, called Baile Naomh Ellen. As the first city to be established on the islands, it quickly became the seat for the colonial government, as well as the centre for Saint Ellen's. Over the next few years, it became the primary centre of Caldish settlement on Imagua, although by the end of the decade, Caldish settlements existed in Altaithe, Nua Taois, and Baile Adamhnáin (present-day San Pietro).

It remained the seat of Caldish rule over what they called the Assimas Islands until Geatland conquered the archipelago in 1562, renaming Baile Naomh Ellen to its present name of Cuanstad. Under Geatish rule, although it was attached to their Eldmark colony, it remained a major economic centre of the region, due to its central geographic position in the Arucian Sea, as well as its location on the Cuanstad Harbour.

After the fall of Cuanstad in 1658 to Estmerish captain (TBD), Cuanstad became a political centre of the Colony of Imagua, which helped bolster its status. During the first stint of Estmerish rule, virtually all Estmerish slaves brought over from Bahia via Kingsport went through Cuanstad before being dispersed across the island to be employed at sugar plantations, or else being sold at Cuanstad's slave markets. As well, with increasing immigration from Estmerish people seeking to establish plantations, this helped boost Cuanstad's profile, particularly as virtually all who immigrated to Imagua arrived on Cuanstad, before moving on to establish their own settlements, or move towards the existing settlements.

After the end of the Gilded Wars, Cuanstad was taken over by Gaullica, who renamed the city Ville-du-Reine. While during this period, they began constructing a new capital in present-day Saint-André, Cuanstad remained a primary economic centre of the island, even though the political centre was moved to Saint-André until 1771, when after the end of the Asterian War of Independence, Estmere retook Imagua (including Dunhelm Island), and renamed the city back to Cuanstad.

During the second stint of Estmerish rule, Cuanstad once again became the colonial capital. At the same time, with the abolition of slavery, and the beginning of industrialisation, Cuanstad became the primary industrial centre for the island, due to its harbour, its population, and its connections to the rest of the world.

In 1891, with the Colony of Imagua being granted self-government, Cuanstad became home to the elected Legislative Council of Imagua. Over the next few decades, Imagua continued to receive more autonomy from Estmere, and apart from occupation during the Great War by Gaullica, Cuanstad remained the main political centre of the island.

After Imagua was granted complete independence from Estmere in 1948, Cuanstad remained the nation's capital. During the 1950s, as the rural-to-urban migration took place, Cuanstad and its surrounding communities, such as Altaithe grew significantly, leading to many in rural areas of Saint Ellen's demanding that Cuanstad be separated from Saint Ellen's, and be designated its own separate county.

Thus, on 28 August, 1961, Cuanstad and its associated conurbation as had existed at that time was formally separated from Saint Ellen's, under the provisions of the Cities Act of 1961, in conjunction with the Fourth Amendment to the Imaguan constitution, which required all cities be their own separate county. On that date, Altaithe became the capital of Saint Ellen's County, while the newly expanded Cuanstad was to have the roles of both a municipality and a county. The incumbent Lord Mayor of the time, Leopold Curnow thus became the Lord Mayor of the expanded city, and the head of the county.

During the 1960s and 1970s, Cuanstad became the major financial centre, while deindustrialisation greatly affected many neighbourhoods, particularly among the dockyards. However, unlike many smaller communities or the Assimas Islands, Cuanstad was able to easily weather the tide of deindustrialisation as it focused on developing its financial and service sectors, which further strengthened its position in the country.

However, as the city continued growing, its boundaries were expanded in 1988 under the Local Governance Act of 1987, which saw municipalities part of the Cuanstad conurbation at that time become part of Cuanstad, taking land away from Saint Christopher's, Saint Ellen's, and Saint Florian's, reaching its present-day borders.

During the 1990s and early 2000s, Cuanstad continued to grow, with increasing numbers of tourists visiting the city. This helped further cement its position as a major economic centre. However, as housing prices began to rise due to increased demand by both foreign investors and businesses, both local and foreign, more people were leaving for outer suburbs, most notably Altaithe and New Burdale, in order to buy more affordable housing. Such a pattern has continued during the 2005 recession and into the 2010s. 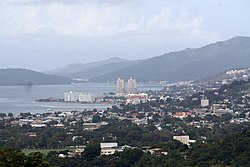 View of Cuanstad from Thompson Hill, 2012

Cuanstad is situated at the end of the Glen Valley, where the Glen River empties into Cuanstad Harbour, which separates Mount Guanara and Mount Morete, as well as on Caynarsh Island, which initially was home to a separate community and a military fort, but has since been subsumed by the suburban development of Cuanstad.

Thus, much of the city is relatively flat, especially along the coast. However, the further inland one goes, the more the elevation rises, as it becomes more hillier. This however constrains development to the more flatter regions of Cuanstad, which partially contributes to the urban sprawl of Cuanstad.

The highest point in the city limits of Cuanstad is Thompson Hill at 802 meters above sea level, while the lowest point of the city is at sea level.

Like the rest of the country, it experiences a tropical monsoon climate, with average high temperatures being 32 °C (89.6 °F), and average low temperatures being 20.5 °C (68.9 °F). The wet season is generally from May to October, while the dry season typically lasts from November to April, although the months of April and November receive more rain than any other month in the dry season.

Locally, Cuanstad has a twenty-two member borough council (Etrurian: Consiglio comunale), and is headed by a lord mayor (Etrurian: sindaco), with the current Lord Mayor of Cuanstad being Ken Lagerfelt of the Democratic Labour Party, first elected in 2016 after defeating three-term incumbent Brenda O'Brien, and re-elected in 2020. They are all elected by residents of Cuanstad every four years by those over the age of eighteen years. The borough council, like other town and county councils, is non-partisan, with all members and candidates being independent politicians. However, unlike any other municipality or county, Cuanstad has the responsibilities of both a municipality and a county, which gives it far more power than any other county excluding the Assimas County. This contributes to the high turnout in Cuanstad for local elections, with an average 60% turnout for local elections.

It is the only recognized borough or city (Etrurian: città) in the country, being granted that status in 1858 to celebrate the 200th anniversary of Cuanstad's capture by Estmere, with all other settlements in the country being classified as either towns or villages, including San Pietro, which is commonly considered a city, although it was only legally a city from 1913 to the annexation of the Assimas Islands in 1946 from Etruria.

On the national level, Cuanstad is represented by twenty members in the Lesser House of Parliament, due to the city's large size, as around 30% of the nation's population lives within Cuanstad's city limits alone. Generally, the city centre and outer suburbs support the centre-right Sotirian Labour Party, while the inner suburbs and poorer neighborhoods support the center-left Democratic Labour Party. However, due to its size, it can also support smaller parties, most notably the Green Party, who have 4 seats and govern in a coalition locally with the Democratic Labour Party, but also Concerned Cuanstad Citizens.

The boroughs were created following the expansion of Cuanstad as part of the Local Government Act of 1987, with the original borders of Cuanstad from 1961 to 1988 becoming the Borough of Glen Valley, and the towns adjacent to it becoming boroughs. Caynarsh, having been divided between Saint Florian's County and Saint Christopher's County after Cuanstad was separated from Saint Ellen's County in 1961, became a single borough.

As the largest city in Imagua and the Assimas, Cuanstad is the main hub of the country's transportation network. All motorways on the island of Imagua all originate from Cuanstad, most notably the Imaguan Motorway which traverses the coast of Imagua.

The city operates a public transit system, with a fleet of buses, known as Cuanstad Transit, serving routes both within Cuanstad, and to connect commuters between Cuanstad and commuter towns such as Altaithe. In November 2019, the Imaguan government opened a bus rapid transit system, the Cuanstad Metro, designed to reduce congestion on the Altaithe-Cuanstad motorway and to bring in commuters from Altaithe and other communities into Cuanstad.

Thus, many of Imagua's musicians and artists who use Estmerish in their works, such as Ed Cole, Hannah Cigleris, and James Chambers were born and raised in Cuanstad, while many others have moved to Cuanstad to further their cultural careers.

Cuisine in Cuanstad is far more influenced by international cuisine, due to the high proportion of foreigners residing in Cuanstad as opposed to other cities in the archipelago. Thus, besides the standard Imaguan cuisine, Cuanstad has many dishes that are rarely offered in the rest of the country, such as banana chips.