Tenkyou (Kokumon: 떤꾜우, Gyoumon: 天教; "teachings of heaven"), sometimes referred to as Senrian folk religion, is a polytheistic and animistic or pantheistic religion originating in Senria. It is typically considered to be the indigenous religion of Senria and the ethnic religion of the Senrian people; it is also sometimes categorized as a nature religion.

The central tenet of Tenkyou is the existence of ki, a vital force inherent to the universe and all things in it. Tenkyou doctrine holds that the goal of the living should be to keep ki in balance through the kannagara, which encompasses practices such as spiritual awareness, the ethic of reciprocity, and the maintenance of extrinsic and intrinsic purity. The maintenance of purity encompasses a variety of practices and rituals, the most significant of which is the performance of rituals and offerings dedicated to kami, supernatural entities regarded as manifestations of ki. Much of the practice of Tenkyou consists of the worship of kami, whether at domestic altars known as kamidana or at public shrines staffed by clergy. Tenkyou lacks a single creator, specific doctrinal text, or central authority, instead existing as a diverse collection of local, regional, and national traditions.

Certain elements of Tenkyou can be traced back to the Sugawara period, though a debate exists among anthropologists and historians about when it becomes reasonable to describe the spiritual practices and beliefs of prehistoric Senria as "early Tenkyou". The religion became increasingly organized as a result of the centralization of political power during the subsequent Eiken, Sunzuu, and Kaihou periods, with the development of state rites & registers and the compilation of Tenkyou myths & rituals into formal chronicles. Over the following several centuries, extensive syncretization with Zohism and Badi altered Tenkyou belief and practice, particularly that of Tenkyou as a folk religion; clergy from all three religions subsequently worked to oppose the spread of Sotirianity to the archipelago. A deliberate effort to establish a form of "State Tenkyou" as a means of bolstering nationalism followed the Keiou Restoration; this was ended by the Senrian Revolution, which led to the formal separation of church and state in Senria.

Tenkyou is found primarily within Senria, which is home to more than 100,000 formal public shrines; 69.4% of Senria's population identified Tenkyou as their religion in the country's 2015 census, and in 2018 as much as 94% of Senrians reported participating in some selection of Tenkyou rituals annually. Most Senrian adherents also practice some form of Zohism or Badi alongside Tenkyou; aspects of Tenkyou have also been retained by Senrian new religious movements. The religion has played a seminal role in shaping Senrian culture, and in many cases Senrian customs and Tenkyou practices are effectively synonymous. Outside of Senria, most practicioners of Tenkyou are members of the Senrian diaspora; however, it has also attracted some interest from non-Senrian populations. Tenkyou shrines are overseen by the World Association of Tenkyou Shrines.

[basic concept of ki as a natural life force]

[spiritual importance of ki and the balance thereof; kannagara, the following of the path of ki, is central to traditional ethics]

An ukiyo-e print depicting the kami Pairyuu in human form.

[supernatural entities which form a particular manifestation of ki; they encompass deities, forces of nature, elements of the landscape, the venerated dead, and intangible elements of all the aforementioned; very polytheistic, animistic, numinous by nature]

The tower gate at Sumiyosi-zinza.

[cases of sacred places/objects rather than shrine buildings] 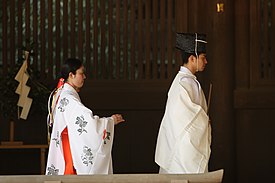 Two Shinto priests, a kannusi and a miko, at the Keiou Shrine.

[kannusi and miko; who is in the clergy, how you become clergy]

[the role of clergy in maintaining shrines, performing rituals, etc]

[often translated as enlightenment; a sense of awareness both into the nature of ki and into oneself, held to be the result of keeping one’s ki well-balanced]

[worth noting the zohists, in syncretistic situations, regard this as a very basic sort of spiritual awareness]

[reciprocity or karma, a moral arc to the universe which is brought about through two things - meiyun, or destiny, and enbun, or chance]

An ablution pavilion, or temizuya, at Hirano-zinguu.

[purity, inextricably linked to the balance of ki] 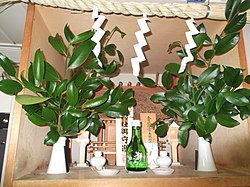 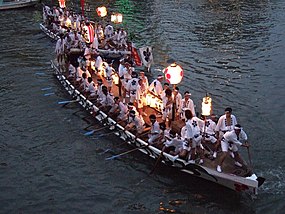 Boats on the Yonesiro River as part of a religious festival in Keisi.

[various festivals, some national, many regional or local, music and dance and parades,

[unclear origins in distant past]

[extensive syncretism with Zohism, Badi, Taoshi on several counts, though because taoshi arrived with zohism senrians tend to group them together] [common elements w/ zohism - emphasis on the soul as an entity, ritual purity, and a fundamental energy/life-force which permeates the universe] [tenkyou adoptions fm/ zohism - a conception of enlightenment and salvation, a caste system via sengshui, LOTS of philosophy, ethics, and architecture, several deities]

[common elements w/ taoshi - emphasis on the ideal of a natural order which can be balanced and maintained through the performance of certain rituals] [tenkyou adoptions fm/ taoshi - concepts of meritocracy and proper conduct, lots of literature and legal code, rationalist and deontologist philosophy]

[any syncretism from satrian traditions that, cheongung, etc. that isn't through zohism - much more limited, but might be found in some contexts]

A ritual being formed at a Tenkyou shrine in Etruria.